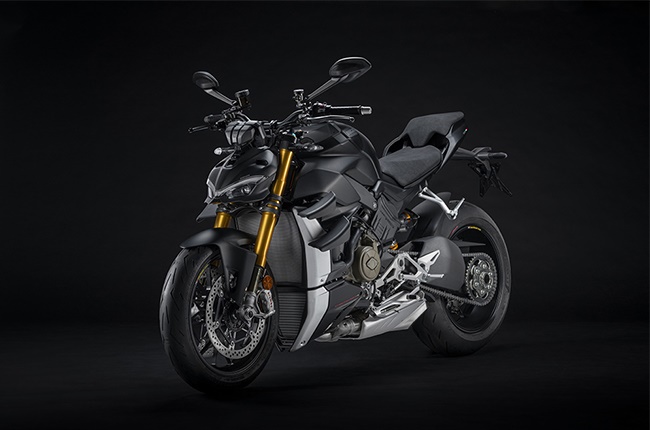 • Ducati will add a new colour to its range in 2021, called Dark Stealth.

Ducati will give its Streetfighter V4 S a new colour scheme in 2021, called Dark Stealth.

The new colour will join the familiar Ducati Red the Italian bikemaker's steeds are donned in. In addition, the Streetfighter V4 range is now Euro 5 compliant in countries where it's sold, including South Africa.

Dark Stealth is a matt black colour that represents the perfect chromatic choice to show the aggressive side of the ultra-naked Ducati. The 2021 bike maintains maximum power and torque values but has been repositioned at different engine speeds. The Streetfighter V4 Euro 5 has a power output of 153kW at 13 000rpm (250rpm higher than the EURO 4 version) and a torque of 123Nm at 9500 rpm (2000rpm lower than the EURO 4 version). These values, obtained thanks to a new calibration and the new exhaust, make the bike even more enjoyable on winding roads, says Ducati.

The Streetfighter is the result of the 'Fight Formula': the Panigale V4 stripped of the fairings, with a high and wide handlebar, 178kg on the scale, and powered by a 1100cc engine.

The entire Streetfighter V4 range for 2021, including the Dark Stealth colour scheme for the 'S' version, can already be ordered in Ducati dealers, with the 'Dark Stealth' version available before the end of 2020. Details on the bike's South African arrival will become known closer to the time.

We live in a world where facts and fiction get blurred
In times of uncertainty you need journalism you can trust. For 14 free days, you can have access to a world of in-depth analyses, investigative journalism, top opinions and a range of features. Journalism strengthens democracy. Invest in the future today. Thereafter you will be billed R75 per month. You can cancel anytime and if you cancel within 14 days you won't be billed.
Subscribe to News24
Related Links
BIKE REVIEW | Aprilia Tuono V4 1100 RR
Next on Life
PICS | From Bot River to Stilbaai with my trusty KLR bike, R12 000 and a few hiccups later