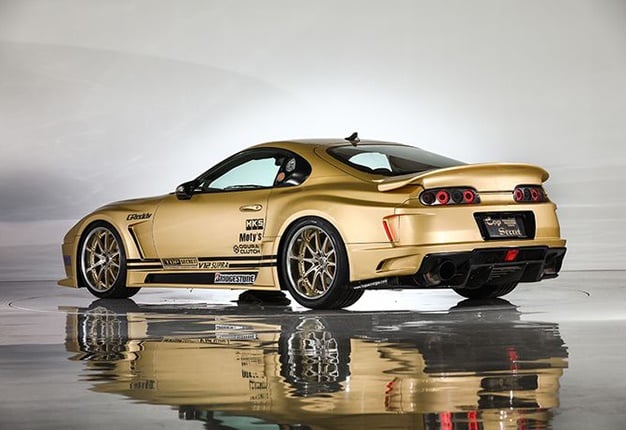 Not many people know who Smokey Nagata is, but mention the word twin-turbo V12 Supra and things start to make a little more sense.

Sporting a Bruce Lee-like hairstyle and specs, he is the brains behind the Top Secret tuning garage in Japan.

Smokey worked as a mechanic at Trust tuning and after a while secretly started working on parts for his car and those of others behind the scenes.

WATCH: The Toyota Supra is a legend in its own right - Here's where it all started

He was eventually found out, but the owners refused to let him leave on condition he kept everything to himself. A year later he opened Top Secret - now you know how he came up with the name...

What is the craziest engine swap you have ever seen or heard of? Email us

Once the garage was up and running and building himself a reputation for creating and tuning high-performance cars like the Skyline, Supra, and NSX, a decision by Toyota set the wheels in motion for the V12 Supra project.

A piece of automotive history

According to a documentary aired about the car, Smokey was furious with Toyota for not bringing out a successor to the MK4 Supra. He wanted to build something that would make them sit up and take notice. He got to work using the 1998 Supra as a base, chucking the original 3.0-litre straight-six 2JZGTE engine and replaced it with a 5.0-litre V12 1GZ-FE that powered the luxurious Toyota Century limousine.

Although both engines made similar power, the V12 had the displacement for the abuse Smokey was about to dish out to it. It was mated to a six-speed gearbox which was responsible for transferring all that power to the rear wheels.

Fitting the colossal V12 engine was by no means an easy feat. It looks a like a completely different car with no resemblance to that of a Supra apart from the rear lights. It sports a G-force wide-body kit and signature gold paint job of the Top Secret stable and letting everyone know which garage it came out of.

While many would have considered that an achievement on its own, Smokey wasn't content with it. He wanted more - and more, in this case, meant adding a set of ball-bearing turbochargers. Space was already limited with the fitment of the engine but that didn't phase the 'tuning god'.

Take a look at the video of Smokey attempting to break the top speed record:

In order to reach the speeds Smokey was aiming for, the car needed to be able to handle it. The engine was re-enforced with stronger pistons, conrods and bottom end. The harmonic drive suspension kept everything smooth and on the road - as it needed to be.

The range of modifications included a wet nitrous oxide kit, two standalone management systems (at the time, there were no ECU's for something with 12 cylinders) and of course the twin turbo setup. When put on the dyno it made 693kW. It was then time to put the car to the test.

Smokey initially tested the car on the Nardo test track in Italy reaching a top speed of 357km/h before the engine topped out at 7300rpm. Although Top Gear SA claims the Supra reached a speed of 385km/h.

The car went under the hammer earlier this year at the Tokyo Auto Salon but it is unclear where the car is at this present time.

Find out more about the car in this 30-minute video:

We live in a world where facts and fiction get blurred
In times of uncertainty you need journalism you can trust. For 14 free days, you can have access to a world of in-depth analyses, investigative journalism, top opinions and a range of features. Journalism strengthens democracy. Invest in the future today. Thereafter you will be billed R75 per month. You can cancel anytime and if you cancel within 14 days you won't be billed.
Subscribe to News24
Related Links
WATCH | Out with the new, in with the old - This 2JZ swapped A90 Supra shows it does not mess about
Next on Life
Does cruise control help save fuel when driving? Here's what you should know

Read more on:
japanguide and lists