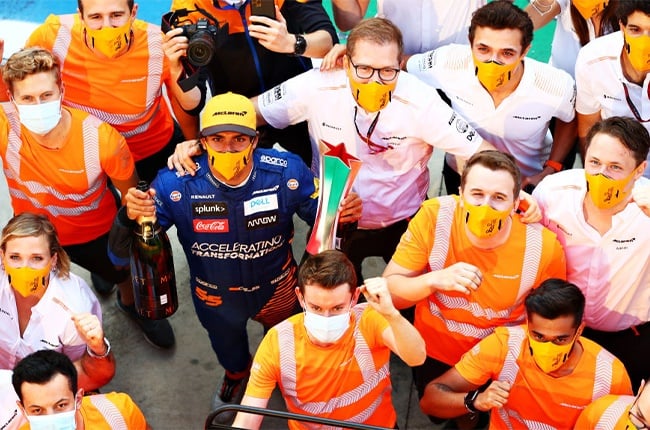 • The McLaren team sent Ferrari a message, asking them to take care of Sainz.

All good things must come to an end, but when the farewell is as emotional as this one, you can't help but feel that frog in your throat.

Following the Abu Dhabi Grand Prix, Carlos Sainz Jr. and the McLaren went their separate paths as the Spanish driver will join Ferrari come the 2021 season. Sainz had been with the team since the start of the 2019 season and has, quite clearly, established himself in the team in more than just a professional way. His soon-to-be-former team took to social media, but not to thank the driver for his unwavering dedication over the last two seasons, but rather to ask Ferrari and the Tifosi, Ferrari's adorned fans, a favour.

Several members of the McLaren team, including Sainz's team mate Lando Norris, all took part in a video, in which they ask Ferrari, in Italian, to take care of a 'gift' they nurtured and helped grow since 2019. The video is loaded with emotion and highlighted the true nature of the relationship between Sainz and his team - something McLaren wants Ferrari to have, as well.

For the first time since 2012, McLaren ended a season as the third-best team. This year, they were embroiled in a season-long battle with Racing Point and Renault for the slot behind Mercedes-AMG and Red Bull Racing, with the team from Woking taking that honour. McLaren's upward turn of events was a long-time coming, with Sainz stepping up to the plate in 2019 and taking his first career podium at the Brazilian GP. He followed it up with a second-place finish at this year's Italian GP.

The driver returned the team's trust in him with solid performances and helping them to a third-place finish, but his metal will be tested when he joins Ferrari next year.

READ: Should Carlos Sainz be concerned about Ferrari's pace ahead of joining the team in 2021?

The Italian team endured a torrid 2019, with the car lacking in almost every area. Though the team's current drivers, Charles Leclerc and the departing Sebastian Vettel, did what they could, it wasn't enough to lift the team higher than sixth in the Constructors' standings. Sainz, though, will have to step up to the plate and help Leclerc bring glory back to the Scuderia.

That Sainz can race is undoubted, but his input will have to be invaluable in lifting the team from its slump. His success at Ferrari will not only be measured out on track, but also his ability to unify a team that is seemingly in discord.

We live in a world where facts and fiction get blurred
In times of uncertainty you need journalism you can trust. For only R75 per month, you have access to a world of in-depth analyses, investigative journalism, top opinions and a range of features. Journalism strengthens democracy. Invest in the future today.
Subscribe to News24
Related Links
Should Carlos Sainz be concerned about Ferrari's pace ahead of joining the team in 2021?
Sainz faces questions for trading competitive McLaren for struggling Ferrari
'I have not become number one' - Leclerc insists that Sainz will be on equal footing in 2021
Next on Wheels24
'No thank you, no' - James Allison has no desire to be Mercedes F1 team boss, says Wolff