F1: Too nice for his own good? Leclerc failed to benefit from Verstappen's rare mistake • The Ferrari driver had a chance for leading the race after the restart.

• Leclerc finished one position ahead of his team mate, Carlos Sainz.

Ferrari saw a welcome return to speed at this Sunday's Imola Grand Prix held in Italy. Or, if we use the race's full name: Formula 1 Pirelli Gran Premio Del Made In Italy E Dell'emilia Romagna. For Ferrari, especially, it was a good race as, for the first time in more than a year, the team had performance and could challenge McLaren as the next best team after Red Bull Racing and Mercedes.

The Italian team walked away proud of themselves after registering a strong result as both its drivers finished inside the top five. Charles Leclerc finished ahead of new team mate Carlos Sainz in fourth, but one has to wonder if there wasn't a chance of him going one position better.

See, when the race resumed after Valtteri Bottas and George Russell's 300km/h crash, the drivers took to the track behind the safety car. With Leclerc in second, he was poised for a strong result, but a single judgement call affected his restart and, ultimately, his performance in the remainder of the race.

Why did you stop?

When the safety car signalled that it'd be returning to the pits, Max Verstappen, the race leader, backed up all the cars. He slowed the field down to allow enough time for the safety car to return to the pits and for racing to then resume. With Leclerc on his gearbox, it was clear that the Ferrari driver had only one intention in mind: attack.

However, coming through an S-bend, Verstappen lost control of his car and careened off track. This was a perfect opportunity for Leclerc to pass him - legally! - but the Ferrari driver instead opted to slow down and allow the Red Bull driver to reclaim his position at the front of the field.

The moment Verstappen slotted in front of Leclerc, he slammed on the throttle, never to be seen again. Leclerc, caught off-guard by Verstappen's sudden acceleration, came under pressure from McLaren's Lando Norris, who passed him leading into Turn 1.

Does Charles Leclerc lack the 'killer mentality' of an F1 champion? Email us your opinion or use the comments section below.

Had Leclerc opted against being the ever-gentleman he is, he could have been leading the race after the restart. Fair enough, his Ferrari is a sitting duck against Mercedes and Red Bull's prowess - perhaps even McLaren, too - but it would nonetheless have given him a better chance of fighting for a podium finish.

Had he passed Verstappen at the said moment, it could have allowed Norris to pass the then race leader, as well. It would have made Verstappen's job to reclaim the lead a tad more difficult, given that he'd have to pass Norris' fast-charging McLaren. The tussle between Norris and Verstappen could have given Leclerc some breathing room and allow him to eke out a gap in front. Of course, Verstappen would have passed Norris, and Hamilton, fighting his way back to the front from ninth, would have done so, too.

And even if Verstappen and Hamilton passed Leclerc to finish first and second, respectively, Ferrari could have seen their star driver finish their home Grand Prix in third place.

Charles Leclerc is one of the nicest guys in F1, but perhaps, just perhaps, he should adopt a more ruthless approach when taking to the track. Much like the Verstappens and Hamiltons of F1… 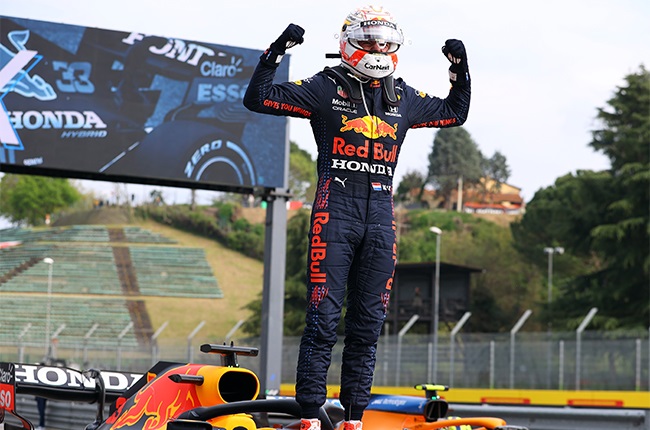 Max Verstappen after winning the 2021 Imola Grand Prix
Getty Images Bryn Lennon
We live in a world where facts and fiction get blurred
In times of uncertainty you need journalism you can trust. For only R75 per month, you have access to a world of in-depth analyses, investigative journalism, top opinions and a range of features. Journalism strengthens democracy. Invest in the future today.
Subscribe to News24
Next on Wheels24
A record-setting run! Lewis Hamilton takes 100th pole of his F1 career in Spain