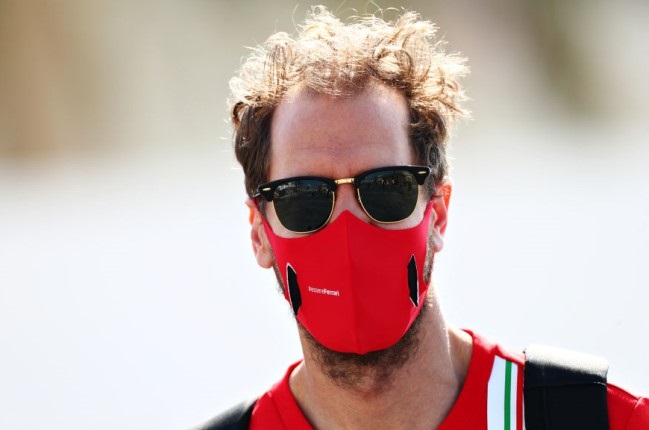 Sebastian Vettel of Germany and Ferrari walks in the Paddock during previews ahead of the F1 Grand Prix of Abu Dhabi at Yas Marina Circuit. (Photo by Dan Istitene - Formula 1/Formula 1 via Getty Images)

• The German driver joined the team in 2015 after winning four titles at Red Bull.

• The 33-year-old won 14 races during his tenure at the Italian team.

Four-time champion Sebastian Vettel hopes to bid farewell to Ferrari with a smile on Sunday, but has admitted that his six-year stint in Italy is, ultimately, ending in tears of failure.

The 33-year-old German, who joined Ferrari in 2015, offered a searingly-honest and realistic appraisal of his time in Italy, despite winning 14 races, when he admitted his goal had been to claim a fifth title.

That total made him the third most successful driver in the team's history behind seven-time champion Michael Schumacher, with 72 wins, and Niki Lauda on 15.

But emulating his idol Schumacher as a Ferrari title-winner had been his target.

"It doesn't change anything, we've still failed," he told reporters.

"We had the ambition to win the championship and we didn't.

"We were up against a very strong team-driver combination, one of the strongest we've seen so far, but our goal was to be stronger than that and, in this regard, we failed.

"There's a lot of reasons why, but in the big picture, I think it's not unfair. It's just the truth. Nothing wrong with saying it out loud."

He rejected a suggestion that the pressures of expectation from the 'tifosi' had contributed to the team's failings.

"The pressure in Italy? The fans and so on, yes, it is there, but ultimately I always set the highest sort of expectations on myself and I think I was the first and best judge if I didn't achieve them," he added.

Vettel will join Racing Point, re-branded as Aston Martin next year, and believes he has gained from his Ferrari experiences.

"Everything that happened has happened for a reason. The main thing on my side is to make sure that I learned from it and I think I have grown with it.

"Overall, I feel much more comfortable, or in a better place now, than all those years ago, but certainly it hasn't always been easy and straightforward."

His only hope for a seat next season is with Red Bull if they decide not to retain Alex Albon.

Others on the move after Sunday's finale include Daniel Ricciardo, who switches teams from Renault to McLaren, and Carlos Sainz who leaves McLaren to replace Vettel at Ferrari.

Haas are changing both drivers. Kevin Magnussen is out after Sunday following already-departed Romain Grosjean, who has returned home after his amazing escape from a high-speed fireball crash at the Bahrain Grand Prix.

Daniil Kvyat is also expected to be leaving Alpha Tauri where Japanese Yuki Tsunoda is poised to replace him in the Honda-powered outfit.

We live in a world where facts and fiction get blurred
In times of uncertainty you need journalism you can trust. For 14 free days, you can have access to a world of in-depth analyses, investigative journalism, top opinions and a range of features. Journalism strengthens democracy. Invest in the future today. Thereafter you will be billed R75 per month. You can cancel anytime and if you cancel within 14 days you won't be billed.
Subscribe to News24
Related Links
'If I had the chance to drive a Mercedes myself, I wouldn't say no' - Vettel
Vettel says Ferrari's engine troubles are not the team's only 'big problem'
Next on Wheels24
First Leclerc's watch in Italy, now Vettel's bag stolen in Barcelona