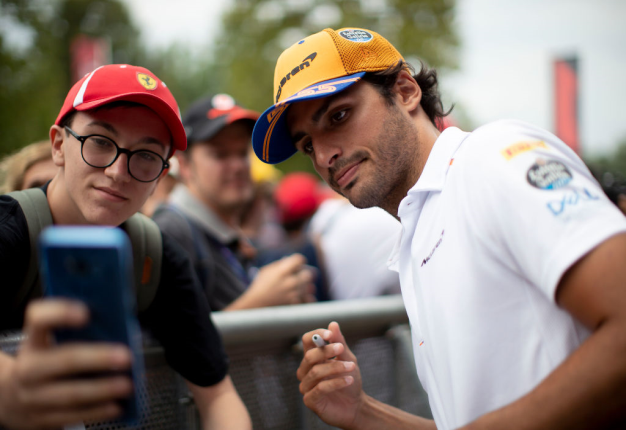 Carlos Sainz Jr. of McLaren F1 Team with fans during the F1 Grand Prix of Italy. (Photo by Marco Canoniero/LightRocket via Getty Images)

Madrid-born Sainz started his career like most racing drivers in karting, winning the Junior Monaco Kart Cup in 2009, moving on to Formula 3, before coming through the tough selection process for the Red Bull Junior Team in 2015.

"I've given him some advice but the most important was 'enjoy yourself'," said 58-year-old Sainz Sr, world rally champion in 1990 and 1992 with Toyota, and runner-up four times.

He made his F1 debut in 2015 with Toro Rosso alongside Max Verstappen, before joining Renault in 2017, moving on to McLaren in 2019.

So far he has raced 102 Grands Prix highlighted by a sixth-place finish in the first year at McLaren last season, underlining his consistent growth.

Sainz delivered McLaren's first podium in five years with third in Brazil last year, awarded retrospectively, after a sensational comeback from 20th and last on the grid.

After a five-race point-scoring streak from France to Hungary, he finished the 2019 championship with 96 points and in sixth place.

"The big step forward was made last year, this year is more one of continuation," said Sainz.

Sainz should have no problem settling in at Maranello as he speaks fluent Italian, perfected during his karting days.

The Spaniard lived for three years with Italians while at Toro Rosso, whose headquarters are in Faenza, like Ferrari also based in the Emilia Romagna region.

Sainz becomes the third Spaniard to drive for the 'Prancing Horse' after former two-time world champion Fernando Alonso from 2010-2014 and Alfonso de Portago briefly in 1956-1957.

"Carlos is doing great, and not only last year," said compatriot Alonso, a friend and advisor to the young Sainz during his first steps in Formula One.

"Since Toro Rosso, he has done a great job. He had Verstappen as a partner from the beginning, after that he had (Nico) Hulkenberg. He has always had tough competitors at his side and he has always done well."

I’m very happy that I will be driving for Scuderia Ferrari in 2021 and I'm excited for my future with the team.

I still have an important year ahead with McLaren Racing and I really look forward to go back racing with them this season. pic.twitter.com/UXkTzFzUgV

We live in a world where facts and fiction get blurred
In times of uncertainty you need journalism you can trust. For 14 free days, you can have access to a world of in-depth analyses, investigative journalism, top opinions and a range of features. Journalism strengthens democracy. Invest in the future today. Thereafter you will be billed R75 per month. You can cancel anytime and if you cancel within 14 days you won't be billed.
Subscribe to News24
Related Links
UPDATE | Carlos Sainz to Ferrari, Daniel Ricciardo to join McLaren in 2021
A lack of 'understanding' caused Vettel divorce - Ferrari
Next on Wheels24
Spanish GP pole slips through Verstappen's fingers as Leclerc recovers from spinning error