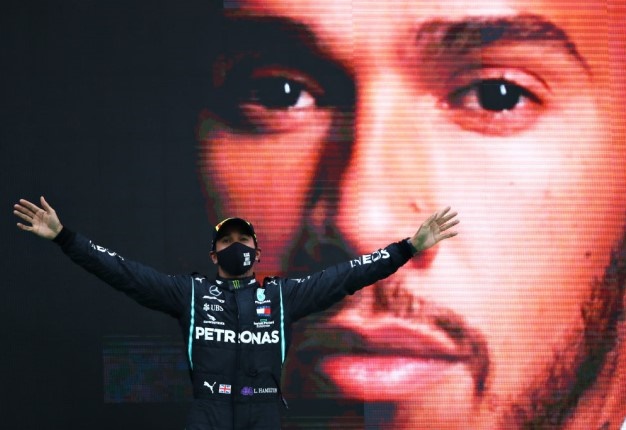 • Lewis Hamilton has the most race wins in Formula 1 after victory in Portugal.

• The Briton has 92 wins, one more than former Ferrari driver, Michael Schumacher.

• Hamilton can equal Schumacher's drivers' title record of seven if he wins the 2020 championship.

Lewis Hamilton is Formula 1's most successful driver, in terms of race wins, after he won the Portuguese grand prix at Portimao Sunday.

The Mercedes driver eclipsed Michael Schumacher's 91 race wins and is on course to equal the seven world titles the former Ferrari achieved in the sport.

"I'm thinking of Michael today, I will forever have the utmost admiration and respect for you, it's truly been an honour to be mentioned in the same sentence as you," the Briton wrote on Twitter after the race.

Earlier in October Schumacher's son Mick presented Hamilton with his father's helmet at the Eifel GP after the Briton scored his 91st race win to equal the German's record.

The 35-year-old's achievement drew congratulations from fellow sportspeople around the globe. From world record marathon runner Eliud Kipchoge to former English footballer Gary Lineker, the world joined the chorus to congratulate one of the true greats of the sport on his momentous achievement.

Lineker, now a football pundit, said: "Another record breaking win for the phenomenal Lewis Hamilton. Hard to argue that he's not the GOAT (greatest of all time)....you will, though."

UK broadcaster Sky Sports F1 produced a touching tribute to Hamilton featuring footage from his karting days. The video includes every driver who Hamilton has surpassed on the way to reaching 92 wins.

Lewis, many congratulations on making history by winning your 92nd grand prix race. I believe that No Human Is Limited, and your story and achievements in Formula 1 are proof of that. Thank you for everything you are doing. pic.twitter.com/Qd6BDt6zO9

Another record breaking win for the phenomenal @LewisHamilton. Hard to argue that he’s not the GOAT....you will, though. ????????

To the legends before me, thank you for paving the way ???? https://t.co/u9hIcdKz2j

No question in my mind. @LewisHamilton is the greatest #F1 has EVER seen. Both on the track and off it. The path he has pursued has taken courage. He is a quality person. Don’t @ me.

Hamilton has won the last three championships and is on course for a fourth title this season, taking his career tally to seven at the end of 2020. He holds a 77-point lead over Mercedes team mate Valtteri Bottas in the standings.

Hamilton told AFP after Sunday's race "I only ever dreamed of being where I am today," he said after the race and a long hug with his father Anthony, who managed his early career.

"I have got my dad here which is amazing and my step-mum Linda - and Roscoe (his dog) - so it's a very special day. It's going to take time to sink in, but I was still pushing coming across the line," he said.

Apart from dominating the season with nine wins from 12 races so far this season, the Briton has been vocal in the Black Lives Matter (BLM) campaign sparked by the death of George Floyd on 25 May 2020.

Hamilton is the only driver to wear a sweater bearing the words Black Lives Matter before races. The only black driver on the grid is intent on using his platform as one of the most recognisable sportspeople in the world.

Hamilton has also drawn attention to the murder of a young black woman Breonna Taylor and the citizen protests in Nigeria against police brutality.

The six-time world champion has been criticised for bring 'politics' into the sport. This is not politics, this is life and a reality for many people around the world.

And Hamilton has illustrated that people mean more to him than titles.

We live in a world where facts and fiction get blurred
In times of uncertainty you need journalism you can trust. For 14 free days, you can have access to a world of in-depth analyses, investigative journalism, top opinions and a range of features. Journalism strengthens democracy. Invest in the future today. Thereafter you will be billed R75 per month. You can cancel anytime and if you cancel within 14 days you won't be billed.
Subscribe to News24
Related Links
Mercedes team boss believes that Lewis Hamilton's market value 'incredibly high'
Lewis Hamilton in dreamland after record-breaking triumph in Portugal
Next on Wheels24
Leclerc fastest again, this time ahead of Merc duo in Barcelona second practice