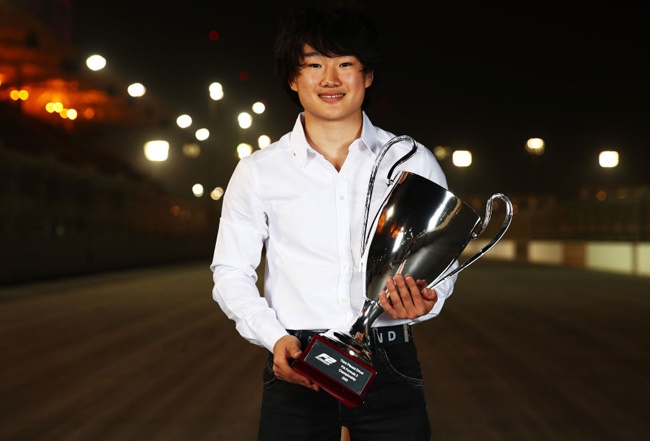 2020 F2 third placed driver Yuki Tsunoda of Japan and Carlin poses for a photo with his trophy during the Formula 2 Championship Prize Giving Ceremony at Bahrain International Circuit on December 06, 2020 in Bahrain, Bahrain.
Photo by Joe Portlock - Formula 1

• Scuderia Alpha Tauri has announced its new driver for 2021 to partner Pierre Gasly.
• F2 driver Yuki Tsunoda has been promoted to the premium class after finishing third in the 2020 championship.
• Tsunoda also participated in the Young Driver's F1 test this week.
• For more motoring stories, go to Wheels24.

The seats are getting less, and chances are looking slim for the remaining F1 drivers without race seats as Japanese racer Yuki Tsunoda will make his debut on the grid in 20201.

Scuderia AlphaTauri announced on Wednesday (16 Dec) that the twenty-year-old Japanese Tsunoda will join the team in 20201. The Red Bull and Honda junior driver finished third in this year's Formula 2 Championship.

Tsunoda's appointment also means he is the first Japanese driver to represent his country on the grid since Kamui Kobayashi who last drove for Caterham in 2014.

JAPAN BACK ON THE GRID! ???? @yukitsunoda07 joins Scuderia AlphaTauri for the 2021 @f1 season! ?? pic.twitter.com/RKzntSQWyZ

Rumours had long been mulling around the pits that the Honda-backed driver would partner Pierre Gasly at Red Bull's sister team.

According to Formula1.com, Tsunoda was quoted as saying: "Like most racing drivers, it has always been my goal to race in Formula 1, so I am very happy with this news," said Tsunoda, 20, who will be the first driver to race in F1 born in 2000 or later.

"I want to thank Scuderia AlphaTauri, Red Bull and Dr. Marko for giving me this opportunity, and of course everyone from Honda, for all their support so far in my career, giving me great opportunities to race in Europe.

"I must also thank the teams that I have raced with to get to this point, particularly Carlin, with whom I have learned so much this year. I realise that I will be carrying the hopes of a lot of Japanese F1 fans next year and I will be doing my best for them too."

Franz Tost, AlphaTauri Team Principal says: "Red Bull has been following Yuki's career for a while now and I am sure he will be a great asset to our team.

"Watching him in Formula 2 this year, he has demonstrated the right mix of racing aggression and good technical understanding.During the test in Imola in November when he drove our 2018 car, his lap times were very consistent over a race simulation, he progressed throughout the day and gave our engineers useful feedback.

"In addition, his integration with the Honda engineers has been seamless, which certainly helps. At the test in Abu Dhabi this week, he proved to be a fast learner and that he is ready to make the step to Formula One."

??? Franz Tost "As Yuki will drive for us next year, we say goodbye to @kvyatofficial, I want to thank Daniil very much for his input to the team, especially this year, he helped us a lot with his experience to set up and improve the performance of the car." pic.twitter.com/N6sN9IxFgz

We live in a world where facts and fiction get blurred
In times of uncertainty you need journalism you can trust. For 14 free days, you can have access to a world of in-depth analyses, investigative journalism, top opinions and a range of features. Journalism strengthens democracy. Invest in the future today. Thereafter you will be billed R75 per month. You can cancel anytime and if you cancel within 14 days you won't be billed.
Subscribe to News24
Related Links
It's the end of the road for these F1 drivers
Honda announces its departure from Formula 1 at the end of 2021 season
Red Bull's Horner and Verstappen advise Gasly to stay at AlphaTauri
Next on Wheels24
Hamilton admits 'I'm struggling with the car' after qualifying sixth for Spanish Grand Prix