• Tensions are running high between Valtteri Bottas and his Mercedes team.

• It is rumoured that Bottas will be replaced by George Russell in 2022.

Mercedes driver Valtteri Bottas' time could be running out at the team, according to Sky Formula 1 pundit Karun Chandhok. Bottas finds himself in a very familiar situation at Mercedes as he looks to justify a decision to extend his Silver Arrows contract for another year.

However, unlike previous seasons, there appears to be cracks manifesting in the relationship with the start of the season already marked by a handful of significant flash-points between them.

Whilst Bottas was unwilling to play the team game in Barcelona when Lewis Hamilton was charging his way through to victory, Mercedes boss Toto Wolff then put some blame on the Finn for his role in the disastrous pit stop in Monaco which saw Bottas' race come to a rather abrupt end. The general consensus to Wolff's comments was that he was being unfair on Bottas for suggesting he had not stopped on his marks correctly in the pit box. Many also pointed out that those members of the Mercedes crew looking after the front-left tyre had no such problems, so his car positioning cannot have been much of an issue.

Chandhok feels like it is getting ugly between Bottas and Mercedes, and that will be music to the ears of a very interested onlooker in George Russell who is looking to earn himself a seat with the senior team.

Chandok said: "This whole saga seems like unnecessarily public mud slinging both ways and not really a sign of a harmonious team-driver relationship. I imagine George will be watching this with more than a passing interest."

Chandhok was reacting to Bottas' response to the whole Monaco debacle, with the Finn questioned about it on media day in Baku.

"I was surprised," Bottas said when asked about his reaction to seeing Wolff partially blame him for the pit-stop blunder in Monaco. "I looked at the video footage and, in my opinion, I was spot on. The team and I held a normal post-race briefing, we analysed the situation also with the engineers at the factory and they understood everything perfectly. So there was nothing unusual about the analysis of the race.

"I missed the middle line by about 2 or 3cm, and if you're that accurate, that's actually pretty good. We also had concerns about the pitstops for a few weeks, so the problem didn't come out of the blue." 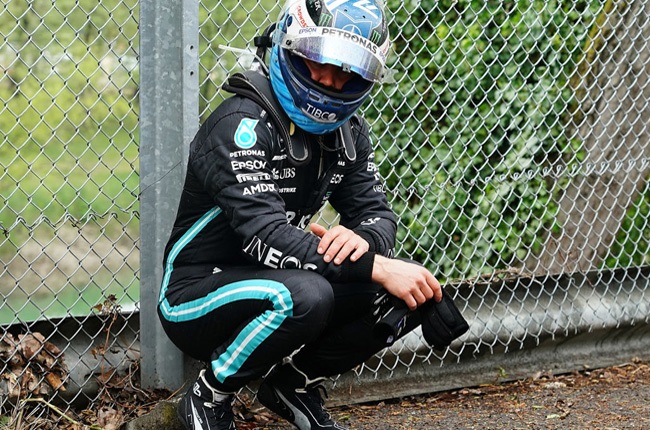 Valtteri Bottas
Getty Images Hasan Bratic
We live in a world where facts and fiction get blurred
In times of uncertainty you need journalism you can trust. For only R75 per month, you have access to a world of in-depth analyses, investigative journalism, top opinions and a range of features. Journalism strengthens democracy. Invest in the future today.
Subscribe to News24
Next on Wheels24
Ka-ching! These are the 10 highest-paid drivers in Formula 1 - Forbes