• Red Bull's Max Verstappen won nine races in 2021, and leads the championship with 369.5 points.
• Lewis Hamilton is also on 369.5 points but only won eight races this year.
• If Max wins the race on Sunday, it will secure his maiden Formula 1 title - even if both drivers crash out.
• For motoring news, go to Wheels24.

From the moment that Max Verstappen joined the Red Bull Junior Team in 2014, there was an inevitability that he would one day find himself battling it out to be Formula One world champion.

He missed an opportunity in Saudi Arabia last weekend, first when he slammed into the wall during qualifying and then when his aggressive tactics against Mercedes' Lewis Hamilton during the race led to him having to give up the lead and take a five-second penalty.

But the 24-year-old has another chance this weekend in Abu Dhabi.

The arch rivals head into the season finale level on points but Verstappen has a slight advantage, having won nine races to Hamilton's eight. If they both crash out of the race, Verstappen will become the first Dutchman to win the title. Such an outcome is not off the books given the way Verstappen has wrangled with Hamilton on the track.

At Silverstone, Verstappen ended up in the crash barriers; at Monza he crash-landed his Red Bull on top of the Mercedes. In Saudi Arabia, Hamilton crunched into the back of the Red Bull after Verstappen braked to let him pass.

READ | Closest F1 title race since 1974: What can we expect from Hamilton vs Verstappen in Abu Dhabi?

The incidents on the track have led to a war of words off it. The Dutchman has labelled the seven-time world champion a "stupid idiot" while Hamilton accused the young pretender of being "over the limit" in Jeddah.

Not once, though, has Verstappen taken a step back or wilted under the pressure.

"He seems to deal with the pressure better than other people," said two-time world champion Fernando Alonso earlier in the season.

A finishing record to behold as we return to Abu Dhabi ??

We are merely days away from capping and end to our unforgettable season so far ?#F1 #HistoryAwaits pic.twitter.com/TP2SiaJpni

Verstappen is used to the spotlight, the pressure and, with already 20 years already on the track, is experienced beyond his years as a racing driver.

According to his father Jos Verstappen, who raced in over a hundred Grand Prix between 1994 and 2003, Max first clambered into a go-kart when he was four and a half years old.

"He was keen, watching all my races, he knew what was going on. He was brought up with racing," Jos told the official F1 podcast Beyond the Grid in 2019.

"I never had to tell him racing lines, he knew."

His father was not the only influence on his early racing career; his mother is Belgian ex-kart driver champion Sophie Kumpen. Her uncle competed in motocross and rally, and her cousin Anthony Kumpen raced Nascar in the United States.

Titles followed and the teenage Verstappen made the step up to Formula Three, winning 10 races in his debut season when he finished third in the championship which was won by Esteban Ocon, a year his senior and now with the F1 Alpine team.

Verstappen would almost certainly have gone on to win the Formula Three title but after one season he made the step up to the biggest stage.

After taking part in practice at the 2014 Japanese GP, he made his F1 debut for Toro Rosso at the Australian GP in 2015. Aged just 17 years, 166 days, he was the youngest ever driver in the sport - and still had not passed his regular driving test.

"For me it was never about age," said Jos. "It was so natural what he was doing. Impressive. Max is an exciting driver. He's much better than me."

That first season saw him take his first points and get involved in his first scrap. A shunt on Romain Grosjean in Monaco saw Verstappen labelled "dangerous" by Williams driver Felipe Massa but he went on to land the FIA's Rookie of the Year title.

In May 2016, he was promoted to the Red Bull team, replacing Daniil Kvyat, and the results were impressive and immediate. In his first race in Spain, he qualified fourth and then held off Ferrari's Kimi Raikkonen to become the youngest ever winner, aged 18, in F1. 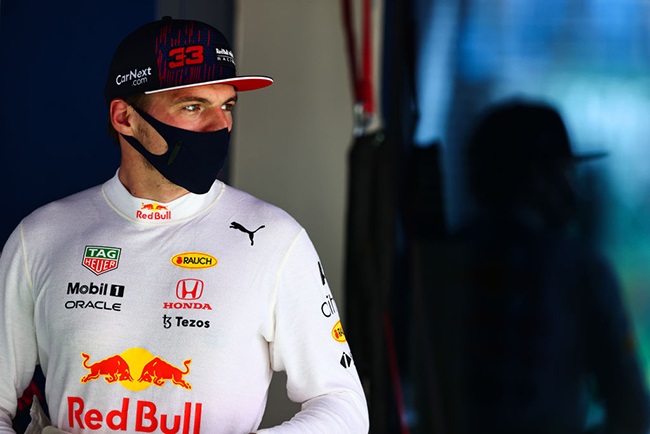 Third place qualifier Max Verstappen of Netherlands and Red Bull Racing looks on in parc ferme during qualifying ahead of the F1 Grand Prix of Turkey at Intercity Istanbul Park on October 09, 2021 in Istanbul, Turkey.
Getty Images Photo by Mark Thompson

The last two seasons he finished third in the championship behind the two Mercedes of Hamilton and Valtteri Bottas. This year, with a better engine and reliability, he has not just matched the Mercedes cars but on occasion he has eviscerated them.

"Max was, from go-karting till the first steps in the cars, always very special, very quick," his manager Raymond Vermeulen told AFP.

"We see him still developing and I think we have yet to see the best."

Whatever the ending is next weekend in Abu Dhabi

2021 will always be remembered because of these two extraordinary drivers

Get ready for the final race week of a season like no other #HistoryAwaits @LewisHamilton @Max33Verstappen pic.twitter.com/nlIVGnp7yj

We live in a world where facts and fiction get blurred
In times of uncertainty you need journalism you can trust. For only R75 per month, you have access to a world of in-depth analyses, investigative journalism, top opinions and a range of features. Journalism strengthens democracy. Invest in the future today.
Subscribe to News24
Next on Wheels24
Max Verstappen 'justified fans' confidence' in him with maiden F1 crown - Mario Andretti