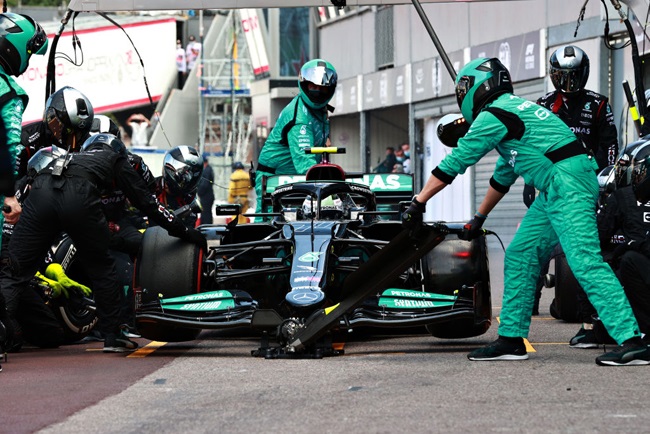 Valtteri Bottas of Finland driving the (77) Mercedes AMG Petronas F1 Team Mercedes W12 makes a pitstop but his front right wheel is stuck on his car leading to his retirement from the race during the F1 Grand Prix of Monaco at Circuit de Monaco on May 23, 2021 in Monte-Carlo, Monaco.
Photo by Mark Thompson

Mercedes driver Valtteri Bottas went into the pits but never returned to the race at the Monaco GP due to issues related to a tyre change.

The Finn had been comfortably maintaining P2 in Monaco, yet unable to make a real impression against leader Max Verstappen.

It was at the pit stop then where Mercedes needed to make the difference for Bottas as he looked to ditch the soft tyres. They sure succeeded in changing the race for their driver, but not in a good way.

Instead Bottas was left stuck in his pit box with the front-right tyre stuck onto the axel.

"The wheel nut machined onto the axle as we attempted the pit stop, meaning the wheel cannot be changed," Mercedes confirmed.

Bottas would sink down the order as Mercedes worked frantically to try and free the wheel, but unable to do so, it meant that the Finn had gone from P2 to a DNF.

Mercedes have admitted before that pit stops are not their strongest area, and that seems like an understatement after yet another race-defining error.

Back at the season opener in Bahrain a blunder in the pits cost Bottas any chance of victory, while at the Emilia Romagna Grand Prix an issue with the pit stop gun resulted in an extended stop for Lewis Hamilton.

And in Monaco, Bottas was not the only one left unhappy with his Mercedes service.

Hamilton was furious after the German outfit failed to stop him and get him back out onto the track ahead of Pierre Gasly, having been stuck behind the AlphaTauri driver in his first stint.

Then just to make matters worse, Sergio Perez was able to go longer in his Red Bull and jump the pair of them, meaning Hamilton was down a place to P7.

We live in a world where facts and fiction get blurred
In times of uncertainty you need journalism you can trust. For only R75 per month, you have access to a world of in-depth analyses, investigative journalism, top opinions and a range of features. Journalism strengthens democracy. Invest in the future today.
Subscribe to News24
Next on Wheels24
Mad Max puts an end to Silverstone drama: 'Can we just stop it now, please?'