On this day: Hamilton and Massa's 2008 F1 title battle goes down to the wire in Brazil

• Lewis Hamilton won the 2008 Formula 1 championship at the end of an intense Brazilian Grand Prix.

• The driver had his work cut out as Felipe Massa challenged him for the gold.

• The title-deciding race was one of the most exciting in Formula 1 history.

Remember the 2008 Formula 1 drivers' championship battle? Yeah, the one where Felipe Massa (Ferrari) challenged Lewis Hamilton (McLaren-Mercedes) for the title, only for the final outcome to be decided on the final corner of the final lap of the final race of the season.

It was a humdinger of a race, marred by rain, unpredictability and one driver being championship for about 30 seconds before the pendulum swung against him.

On this day, 2 November 2008, Massa and Hamilton each went into the Brazilian Grand Prix with one goal in mind: to win that year's drivers' championship. For Massa, he needed to win, while Hamilton needed a fifth-place finish to secure the title. It was crazy, but it got even crazier as the race drew on. As the rain descended on Massa's home Grand Prix, the Ferrari driver led from the front and did everything he could to ensure victory.

But it's never over in F1, and the sport would experience probably the most intense 30 seconds in its history. 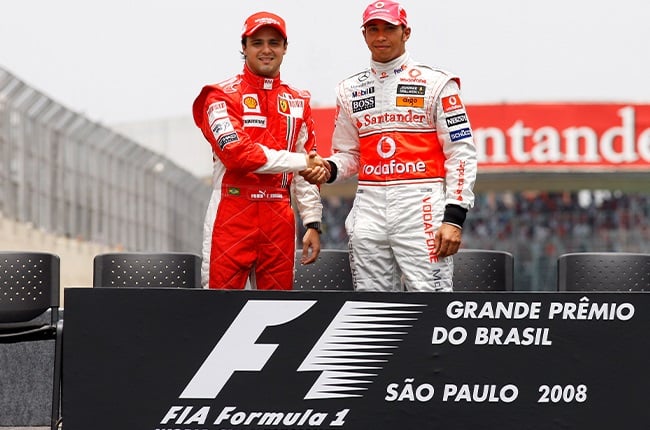 Massa was on a roll in 2008. Despite a few errors throughout the season by both him and Ferrari, they managed to go into the season's final race with a chance to topple their rivals still. On the other hand, Hamilton had the points advantage and the absence of the pressure of needing to win - unlike Massa.

Massa was on the button throughout the weekend, securing pole, setting the fastest lap of the race, and winning it. He did what he had to do and crossed the finish line with the rain pouring down on his Ferrari. It was a jubilant affair in the Ferrari garage and throughout Brazil as, for the first time since Ayrton Senna, a Brazilian had won the F1 championship. Ferrari fans worldwide were in a festive mood as, for the first time since 2004, the team had secured the championship in two successive seasons.

While the party mood was rampant, the call came that the race was not done and Hamilton was still out on track. With a fresher set of the full-wet tyre fitted to his car, Hamilton carved his way through the field and past drivers who opted to stay out on the dry tyre. It was the wrong decision for them, but it proved to be the right one for Hamilton.

The British driver trod carefully around the track and caught up with Timo Glock (Toyota) at the final turn of the last lap. Hamilton then passed the driver for fifth place, in the process securing his first F1 championship. In 2007, Hamilton lost out on the gold to Kimi Raikkonen (Ferrari) by one point as he and then-teammate Fernando Alonso both scored 109 points to Raikkonen's 110.