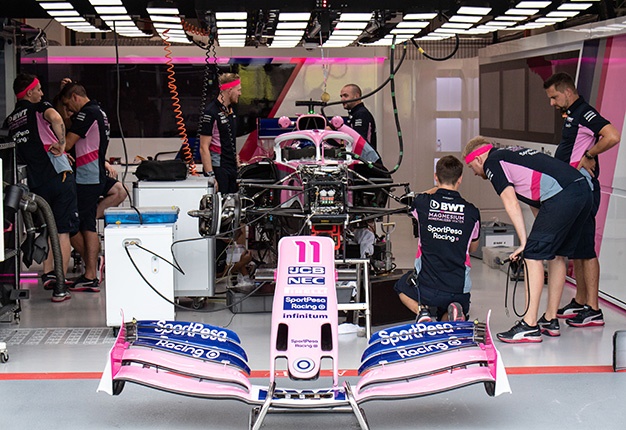 Although the weekend in Singapore was quite a messy, it was a positive and competitive race. SportPesa Racing Point drivers are both looking forward to Sochi as it feels like a mix of a street track and a permanent circuit.

Lance Stroll: "I always find it interesting going to Sochi and seeing all the buildings from the Olympic Games. I love winter sports so it’s great to see it up close. I’ve not been up to the mountains or anything, but I remember last year seeing the mountain tops covered with snow in the distance. It’s a really nice idea to build a track that makes its way through the old Olympic site."

"It’s a track that’s satisfying to drive and it suits my style. I feel it’s going to be a track where we can be competitive. It’s a very smooth surface and that allows you to be more aggressive compared to some other circuits. In many ways it’s quite similar to Singapore and Abu Dhabi – tracks with some long straights that are followed by slower and medium speed corners."

??? @SChecoPerez: "Sochi is a track where I have good memories. My podium there [in 2015] was a really special result. There was quite a bit of drama on the last lap, but we came through to take the podium"

"The DRS has quite a big impact in Sochi, but it’s still tough to overtake. “I like the fact that the walls are close because it makes it more of a challenge. You don’t get as much margin for error as you do on a lot of other modern tracks. We introduced a decent update in Singapore and there’s still some fine-tuning to make sure we get the most from it. Sochi will give us a chance to do that.”

Sergio Perez: “Sochi is a track where I have good memories. My podium there [in 2015] was a really special result, where we chose a different strategy compared to the others and it really worked out well. I remember I was under big pressure from behind. There was quite a bit of drama on the last lap, but we came through to take the podium."

“The Sochi track feels like a mix of a street track and permanent circuit. It’s quite a challenge and it doesn’t allow for any mistakes, especially the final sector where the walls are quite close. It can be very tricky and feels narrow. For the drivers, it’s an interesting layout with some unusual corners. I really enjoy turn three because of the high energies and its long duration."

??? @lance_stroll: "It’s a track that’s satisfying to drive and it suits my style. I feel it’s going to be a track where we can be competitive"

"You can take it flat, but it’s the one corner on the track which really takes the life from your tyres. “For whatever reason, overtaking has never been as easy as you would think. It’s surprising, given that we have such a long straight. It’s not easy to follow other cars closely around there. When you are following a car, you struggle quite a lot for traction out of the low-speed corners [at the end of the lap] and that can be a problem because you fall back by the time you get to the straight.”

Otmar Szafnauer, CEO & Team Principal:  “We had a messy weekend in Singapore, but took away some positives too. The race pace was competitive, although we couldn’t really demonstrate it given our starting positions and race circumstances."

"The race seemed to be coming to us, and it looked as though points were within reach, but we ran out of good fortune in the end. It’s one to take on the chin and bounce back in Sochi this weekend. The updates we introduced in Singapore have given us a performance step and I think the races coming up will allow us to extract even more from them.”

Fireworks ??
Fight back ??
Strike back??

We reflect on our 5 key moments from the SingaporeGP ??https://t.co/K7JrMCizKs#MakeItCount #F1 pic.twitter.com/SP3BBRM7qA

We live in a world where facts and fiction get blurred
In times of uncertainty you need journalism you can trust. For only R75 per month, you have access to a world of in-depth analyses, investigative journalism, top opinions and a range of features. Journalism strengthens democracy. Invest in the future today.
Subscribe to News24
Related Links
Singapore GP: Racing Point have work cut out after tough qualifying session
Racing Point #ItalianGP race report: 'I was just in the wrong place at the wrong time' - Stroll
Next on Wheels24
Lawrence Stroll strengthens grip on Aston Martin ahead of new F1 season - report