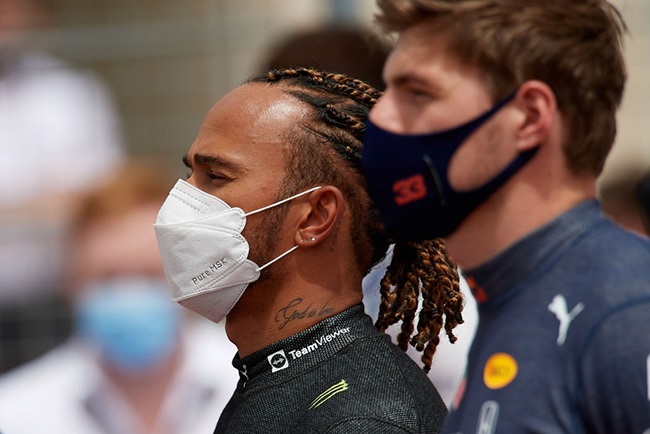 Lewis Hamilton of Great Britain and the (44) Mercedes AMG Petronas F1 Team and Max Verstappen of Netherlands and the (33) Red Bull Racing prior to the F1 Grand Prix of France at Circuit Paul Ricard on June 27, 2021 in Le Castellet, France.
Photo by Jose Breton/Pics Action/NurPhoto

• Max Verstappen and Lewis Hamilton will start the final race on equal points.
• Verstappen has led most of the 2021 championship but lost the last three races to Hamilton.
• Max will start on pole, with an advantage to smash Lewis' record title run hopes.
• For motoring news, go to Wheels24.

Red Bull boss Christian Horner has likened the Formula One title fight to Squid Game as Max Verstappen and Lewis Hamilton battle for the championship in Abu Dhabi.

The pair are locked on 369.5 points in the drivers' standings, with the Red Bull of Verstappen having the advantage of winning one more race than Hamilton throughout an enthralling season.

Red Bull and Mercedes are also still contesting the constructors' championship, although the latter holds a solid 28-point lead in that fight.

How we'll line up for our title decider on Sunday!#AbuDhabiGP ???? #F1 pic.twitter.com/RqO6HNorCK

However, for the first time since 1974, two drivers enter the last race of a season neck-and-neck and, while Netflix has their own behind the scenes F1 series, Horner instead feels this year has played out like the hit South Korean show Squid Game, which saw competitors try and survive to win a huge cash prize.

"I think the mood is one of excitement," Horner said at a press conference alongside Mercedes counterpart Toto Wolff, a man with whom he has verbally sparred throughout the season.

"I think that the way we have fought the way we have pushed in this campaign, no-one has come close to challenging this team in the last eight years, and here we are in the final race in with a shot, a long shot in the constructors and an equal shot with drivers.

"It has been tense, frustrating on occasions, we have pushed the limits, pushed each other and pushed our competitors, and here we are at the final race for the showdown. It almost feels like Squid Game that we have ended up here on equal points."

When asked if he had a message for Horner, the two team principals having exchanged barbs across a campaign fraught with tension, Wolff was magnanimous.

We're at the tail end of a truly unforgettable season

The Verstappen-Hamilton rivalry will surely go down as one of the most talented, iconic and fierce in F1 history ??#AbuDhabiGP ???? #F1 pic.twitter.com/3QeyI7ZbIL

"Good luck. May the best man and the best team win," he said. "It is exciting, both teams have had their fair share of luck and bad luck, and from where we sit, it is that team and driver are both married to win.

"The journey so far has been very happy at times, exuberant and very frustrating in different moments and to find each other here competing on equal points; it is good for spectators but also for us.

"It has pushed us to new limits, they (Red Bull) have done a formidable job this year, and that is why it is all-in for this Sunday; whoever wins deserves to win.

"I think there is mutual respect for the job the other team has done. They wouldn't be where they are, but it is just too intense.

"I stand for the team and the interest of the team. That can be fierce at times because it is not just the drivers fighting on track, it is a fight for advantages in the regulations, and a certain bias comes from different perspectives.

"I can understand that rationale that if things go against a team or the two drivers, I can get quite emotional in the moment, and Christian has his own way of dealing with it.

"Two very different personalities, but it is just this fight for the trophy, one of the most important prizes in the sport, and that is why you cant expect a lot of schmoozing between the drivers, team principals and the team."

Horner echoed those sentiments and joked about not spending time with Wolff away from the track over the off-season.

"We are competing for two of the biggest trophies in sport; of course, the competition is intense; as characters, we are quite different, but we have the same intensity and competitiveness," he said.

"I will defend my team and both my drivers to the hilt because that is what you do, that is who you represent and who you look to protect.

"Yes, there has been competition on track, off track, and it has been pushing the boundaries. Toto has done the same from his side, it has got heated, but that is sport. For me, it would be very artificial to sit here or throughout the season and be all smiles with your biggest competitor. I can't do that because that wouldn't be being true or honest.

"It has been an intense competition, it has been fierce between the two of us, and it will be next year and the year after.

"We have two great teams, separated by 15 miles, and the commitment that has gone in has been phenomenal. If they (Mercedes) would slow down a bit, it would certainly help!

"Of course, emotions boil over, we are in a competitive sport, and that is Formula One. I'm not going on holiday with you (Wolff) after this weekend."

We live in a world where facts and fiction get blurred
In times of uncertainty you need journalism you can trust. For 14 free days, you can have access to a world of in-depth analyses, investigative journalism, top opinions and a range of features. Journalism strengthens democracy. Invest in the future today. Thereafter you will be billed R75 per month. You can cancel anytime and if you cancel within 14 days you won't be billed.
Subscribe to News24
Next on Wheels24
F1 LIVE | 2022 Spanish Grand Prix - 1st Practice