Ricciardo finally scores a podium with Renault, now the team's boss has to get a tattoo 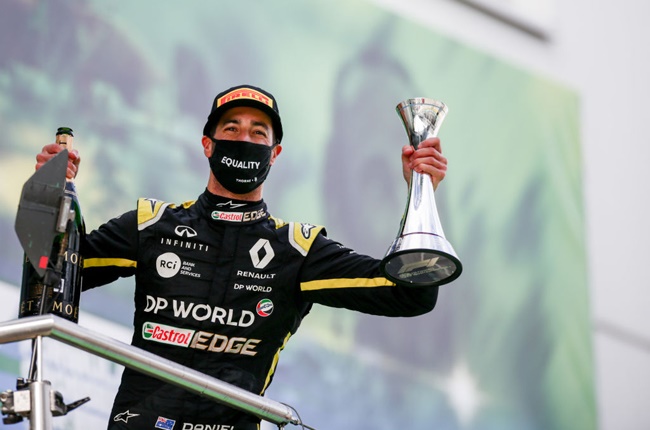 • Ricciardo joined the team at the start of the 2019 season.

• Renault's team boss will get a tattoo following the podium finish.

After a two-year wait, Daniel Ricciardo finally appeared on a Formula 1 podium.

The last time the Honeybadger stood on one was in Monaco 2018 when he won the race in what was sweet redemption for the 2016 fiasco.

At the end of the 2018 season, Ricciardo packed his bags and left Red Bull for Renault, but the newly formed partnership did not get off to the best of starts. 2019 was a challenging year for both Ricci and Renault, which led to the Australian signing with the McLaren team even before the 2020 season got underway. It left a sour taste in Renault's mouths - especially for team boss Cyril Abiteboul - but Ricciardo was adamant that he is still focused on Renault and that he's aim remains to get on the podium with his new team.

It happened yesterday in Germany, and it was ecstasy all around in the Renault garage.

Did Ricciardo make a mistake signing with McLaren given Renault's current good run of form? Email us.

Ricciardo is no stranger to Renault. When racing for both Toro Rosso (now AlphaTauri) and Red Bull, his cars were powered by the French giant's engines. In this time, he got to know Abiteboul and formed a good bond with the man who'll later become his team boss.

When Ricciardo joined the team at the start of last year, he told his new team principle that when he scores the their first podium, Abiteboul has to get a tattoo of his choosing. That's right: Ricciardo was going to choose the tattoo Abiteboul would get, to which the boss agreed.

After the race, a reporter posed two questions to Ricciardo, one of which was about the tattoo. Ricciardo, himself a man of the ink, said that it is still very much on the cards, but that it shouldn't just be a tattoo. When Abiteboul looks at it, he must smile and remember the good times they all shared.

Don't be too surprised if Ricciardo sticks a honey badger on Abiteboul's skin.

We live in a world where facts and fiction get blurred
In times of uncertainty you need journalism you can trust. For 14 free days, you can have access to a world of in-depth analyses, investigative journalism, top opinions and a range of features. Journalism strengthens democracy. Invest in the future today. Thereafter you will be billed R75 per month. You can cancel anytime and if you cancel within 14 days you won't be billed.
Subscribe to News24
Related Links
Formula 1 CEO under threat for 'not caring' about Eifel Grand Prix in Germany
How Honda’s departure is leaving F1 with difficult decisions
Next on Life
First Leclerc's watch in Italy, now Vettel's bag stolen in Barcelona