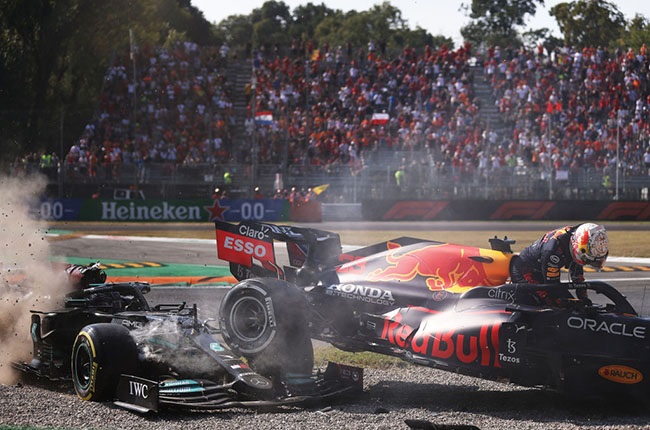 Max Verstappen of the Netherlands driving the (33) Red Bull Racing RB16B Honda climbs from his car after crashing during the F1 Grand Prix of Italy at Autodromo di Monza on September 12, 2021 in Monza, Italy.
Photo by Lars Baron/Getty Images

• This time the two rivals took each other out of the race.

• The incident is being reviewed by the FIA after the race.

Formula 1 world championship leader Max Verstappen will have a three-place grid drop at the Russian Grand Prix after stewards ruled he was mainly to blame for a collision with title rival Lewis Hamilton at Monza on Sunday (12 September).

The collision put both men out of the Italian Grand Prix, with Dutch driver Verstappen's Red Bull landing on top of Hamilton's Mercedes.

The Russian Grand Prix is next up on 26 September.

Verstappen leads Hamilton by five points in the championship after 14 of the scheduled 22 races. The stewards also gave Verstappen two penalty points, his first in the current 12 month period. Both drivers were summoned to the stewards after the race to review video evidence.

BREAKING: Max Verstappen has been handed a 3-place grid penalty at the #RussianGP for causing a collision in Sunday's race at Monza #ItalianGP ???? #F1 pic.twitter.com/A3aCvYd7hg

The stewards said in a statement that they had found "the driver of Car 33 (Verstappen) was predominantly to blame for the collision with Car 44 (Hamilton) at Turn Two. At the 50m board before Turn One, Car 44 was significantly ahead of Car 33. Car 33 braked late and started to move alongside Car 44, although at no point in the sequence does Car 33 get any further forward than just behind the front wheel of Car 44.

"The stewards observed on CCTV footage that the driver of Car 44 was driving an avoiding line, although his position caused Car 33 to go onto the kerb. While Car 44 could have steered further from the kerb to avoid the incident, the stewards determined that his position was reasonable."

Sunday's incident was the second big collision between the two this season, with Verstappen crashing out after contact at the British Grand Prix in July, a race Hamilton went on to win. Title rivals Lewis Hamilton and Max Verstappen collided and crashed out of the Italian Grand Prix at Monza on Sunday after both drivers had long pitstops, Verstappen sitting for 11 seconds in his.

Mercedes' seven-times world champion Hamilton had pitted and returned alongside Red Bull's championship leader, with the pair colliding at the first chicane and Verstappen's car wedged on top of the Briton's in the gravel.

Both drivers stepped out and the safety car was deployed.

"That's what happens when you don't give space," said Verstappen on the team radio.

Verstappen had started the day five points clear of Hamilton after finishing second in Saturday's sprint race for a bonus two points.

READ | Hamilton and Verstappen take each other out during Italian GP

The Dutchman lost out at the start to McLaren's Daniel Ricciardo, who led the race ahead of British team mate Lando Norris with 20 laps to go. McLaren have not won a Formula One grand prix since 2012.

Race stewards will be reviewing the Hamilton/Verstappen incident after the race ??

Verstappen had been running in second place but lost 11 seconds in a slow pitstop that dropped him down to 10th place while Hamilton passed Norris to take the lead with Ricciardo having already pitted.

Hamilton pitted three laps after Verstappen and went wheel-to-wheel with his rival after rejoining the track, with the cars making contact and the Red Bull lifting off the kerb and into the air.

Hamilton's halo head-protection device seemed to take the brunt of the impact as the Red Bull came down on top of the Mercedes.

Hamilton and Verstappen collide at Turn 2!