• F1 engineers are as important to teams as their drivers - if not more.

• There's a reason that this one man is most wanted in F1.

With neither Lewis Hamilton nor Sebastian Vettel's contracts finalised for 2021, you'd expect them to be at the top of any F1 team's shopping list. But you'd be wrong.

Instead, they'd be phoning Andy Cowell, the former head of Mercedes' High-Performance Powertrains (HPP) division, who parted ways with the company in January. Under Cowell's genius guidance, HPP produced all of Mercedes' Formula One championship-winning engines since the adoption of the turbo-hybrid formula in 2014, winning a record six consecutive drivers' and constructor's  titles – with the upcoming seventh already looking like a mere formality in 2020.

Take, for example, a struggling team like Ferrari. Following their suspiciously sudden loss of horsepower after an FIA clampdown on its exploitation of fuel flow regulations at the end of 2019, an appointment – like Cowell – to their engine division, from the best in the business and armed with intimate knowledge of their arch-rival's speed secrets, is worth more than hiring any superstar driver, even Lewis Hamilton. Cowell's relationship with Mercedes started in 2004 when he joined the then Mercedes-Ilmor group, responsible for McLaren's V10 engines (that's what they were called back then as if a dirty word today) at the time, after being involved with the Kinetic Energy Recovery System programme that F1 cars used between 2009 and 2013; and eventually becoming HPP's managing director in 2014, with the advent of the stupidly named turbocharged 1.6-litre V6 "power units".

In a podcast recorded last year, Cowell recalled secretly harbouring fears that HPP, then supplying eight cars in 2014, would arrive at the era-heralding Melbourne season opener woefully unprepared. But after seven mechanical retirements in that race, they needn't have worried: Mercedes-powered cars finished 1-2-3 as a warning shot to their rivals.

While HPP's public progress appeared to be effortless, in truth, the new engines were extremely complicated. If mastering engine knock from the high-boosting V6 engine was one thing, it was nothing compared to the integration of the individual components: two high-speed electric motors and their matching inverters, the battery pack, control of the fuelling, spark timing and variable inlet timing, the MGU-K (kinetic energy recovery system), MGU-H (heat energy recovery system) and the compressor. Still, Mercedes' continuously floundering rivals made the Silver Arrows' success look easy; even if, by the latter's own admission, they were initially lacking on the aerodynamics front. In 2014, the champion-elect, Lewis Hamilton, scored nearly 150 points more than his nearest non-Mercedes rival; and more than 100 points in 2015. Following last Sunday's British Grand Prix, a Mercedes-powered car has won 93 out of 125 races since 2014.

At HPP, Cowell obsessed about efficiency, evolution and innovation. One category that has been evolving non-stop in the hybrid era has been the different engine modes available to the driver. From the outset, there was a qualifying mode, also used at the start of the race; a race mode and a race-save mode, the latter essentially for switching into once the chequered flag is in sight. But a constant development has been race-plus mode, which has, over time, seen increasingly more power being made available over the lap – as Cowell's team has continued finding ways of delivering more power, more of the time – and reliably so: Lewis Hamilton was the only driver to complete every race lap of 2019 without suffering a single mechanical breakdown.

One of the company's proudest moments was when its M08 EQ+ engine, powering the championship-winning 2017 Mercedes W08, achieved a thermal efficiency rate over 50% on the dyno that year, staking its claim as the most efficient racing engine ever built. Thermal efficiency is calculated as the remaining useful energy in an internal combustion engine after discounting the losses suffered through heat transfer and unburnt fuel. At their peak, the naturally aspirated V8s used in F1 between 2006 and 2013, reached a thermal efficiency of 29%. The first Mercedes turbo hybrid engine of 2014 ramped that figure up to 44%. As a sign of unrelenting progress, the 2017 engine developed 80kW more but used the same amount of fuel.

If you're wondering why thermal efficiency is important in an F1 engine, bear in mind that power outputs are throttled through a fuel-flow limit – specifically, at an instantaneous rate of 100kg per hour, or 27.8 grams per second. (By comparison, the 2005 three-litre Mercedes V10 F1 engine gorged fuel at an uncontrolled rate of 194 litres per hour.)

Because the hybrid system is capped to deliver a maximum of 120kW of power, there is additional emphasis on maximising returns from the internal combustion engine while remaining within the fuel flow limitations. Optimal efficiency is attained when the volume of unburnt fuel is minimised; or put differently, extracting the most energy from what's available.

How much power? These are F1's most closely guarded secrets, but the number "1 000 horsepower" (750kW) is being bandied about all too often nowadays. At full boost, the Mercedes will spin its tyres in sixth gear. 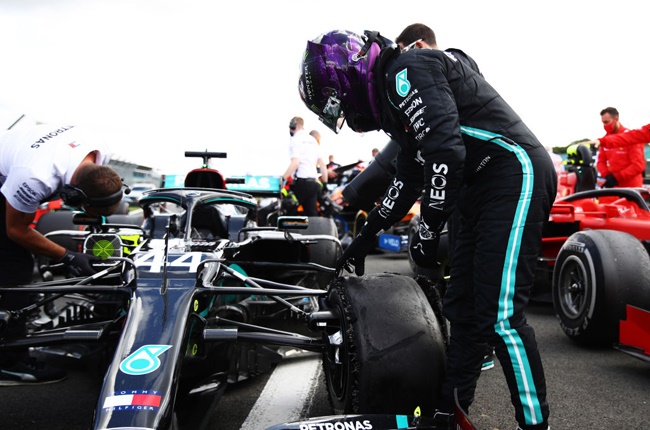 Between 2000 and 2004, Ferrari's dream team of Jean Todt, Ross Brawn, Rory Byrne and Michael Schumacher made history by scoring five consecutive double-titles. That record was surpassed by the Mercedes equivalent of Toto Wolff, James Allison, Andy Cowell, and Lewis Hamilton in 2019 when they went one better.

While Cowell's reasons for his departure from the empire that he'd help build remain unclear, one thing is sure: he's the most wanted man in F1.

We live in a world where facts and fiction get blurred
In times of uncertainty you need journalism you can trust. For 14 free days, you can have access to a world of in-depth analyses, investigative journalism, top opinions and a range of features. Journalism strengthens democracy. Invest in the future today. Thereafter you will be billed R75 per month. You can cancel anytime and if you cancel within 14 days you won't be billed.
Subscribe to News24
Related Links
'The tyres are gone!' Double blowout nearly saw Mercedes-AMG lose it all at 2020 British GP
Next on Wheels24
First Leclerc's watch in Italy, now Vettel's bag stolen in Barcelona