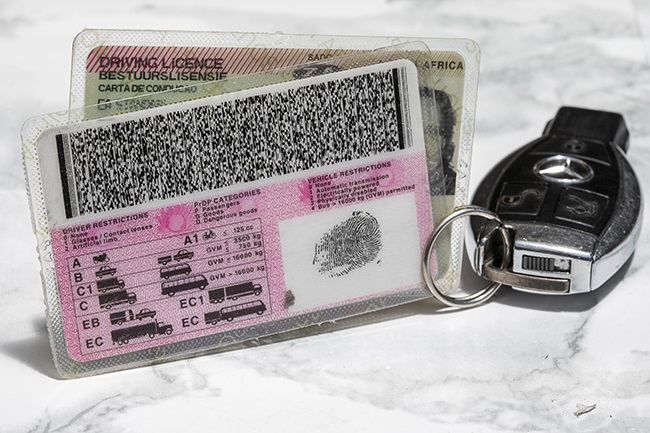 A general view of a driving licence card.
Photo by Gallo Images/Jacques Stander

Wheels24 reader Madelene Rensburg and her husband battled to get their driving licence renewed during the pandemic. They've since ventured out and done their duty, only to be told months later their fingerprints were "rejected".

Wheels24 has contacted the Road Traffic Management Corporation, who told us they're not responsible for printing licences; the department of Transport is. We've also reached out to Transport Minister Fikile Mbalula and his department, but they are yet to respond.

I was somewhat concerned about the specific time given to Rensburg and her husband to arrive between 13:00 and 16:00, especially since the Fish Hoek DLTC closes at 12.30. On enquiry, the City of Cape Town's licence department had no knowledge of the situation or about the DLTC being open after their usual hours. They also strongly advised the couple to go earlier during regular office hours for their safety. "Dear Janine, I'm one of the elderly people who previously wrote to you about the struggle with our driving licence renewals during the Covid-19 pandemic lockdown.

"In May, my husband and I finally plucked up the courage to go from Pinelands to Fish Hoek to renew our licences. It went well at the time. However, today we both received SMSes as follows:

Are you experiencing any trouble with your driving licence or vehicle licence renewals? Please share your thoughts in the comments section below, or email the Wheels24 editor here.

"We don't understand because our fingerprints were taken when we were there. Now at short notice, we have to drive to Fish Hoek again, with the high cost of petrol, to have our fingerprints taken a second time with no guarantee that there will be a better outcome.

"We then went through to Fish Hoek on 30 July as requested; arrived there at 12:40 on Saturday. The doors were still open, and there were about 20 people in a queue out the door in the rain, which, luckily for us, eased off a bit when we arrived. After a few minutes, several people arrived separately, saying they had been told to come at 12:45 to collect their licenses. "The official at the door (security? I'm not sure) told them to give her their ID books, and she would fetch their licences. Some people objected to handing over their ID books but were told they would have to wait outside in the queue if they didn't. Others then arrived and said they had been told to collect their licences at 13:00.

"I didn't see how that worked out because we then asked another official at the door if we were queueing in the right place to have our fingerprints redone. She then took about eight of us (at that stage) needing re-fingerprinting into the building, which was very crowded, to queue at the same window where the people in front of us were waiting. This wouldn't work as only one person attending to those at the window. Then after our "herder" had run back and forth and yelled to other officials, she changed her mind about us waiting at that window and took us to queue outside the fingerprinting room. We stayed there while they finished with the last of the people who were in the queue for the "normal" fingerprinting procedure.

"While we waited, one official walked past and asked another what was going on, and the other replied that a whole month's worth of fingerprints were lost and had to be redone.

"When one of the people doing the fingerprinting finished his last "normal queue" person, he stood up and said he was leaving because he hadn't been asked to help with the re-fingerprinting exercise because they don't want to pay him overtime. He seemed disappointed.

"I asked the lady who re-fingerprinted me: 'So they lost our fingerprints?' and she replied: 'I don't know what they did in Pretoria'. I told her that my temporary driving licence expires in less than a month, and she advised me just to hope that my new driving licence card arrives in time.

"I'm really dreading when our licences arrive, and we have to either brave the chaos again or hand over our ID books with several other people and wait for our licences outside the door. I don't know if people who received their licences had to sign for them or not, but it seems to be a rather irregular process.

"We don't know what the procedure is if our new licences DON'T arrive before our temporary ones expire, which looks pretty likely. Are we going to be fined if we drive under these circumstances? I suppose we can show the SMSes to a traffic cop and hope he doesn't fine us."

We live in a world where facts and fiction get blurred
In times of uncertainty you need journalism you can trust. For 14 free days, you can have access to a world of in-depth analyses, investigative journalism, top opinions and a range of features. Journalism strengthens democracy. Invest in the future today. Thereafter you will be billed R75 per month. You can cancel anytime and if you cancel within 14 days you won't be billed.
Subscribe to News24
Next on Life
Cape Town drivers, beware: Expired licences, reckless driving can get your car impounded on the spot