Dakar | Well-earned rest ahead of marathon stage for Toyota Gazoo • Six stages and one week into the Dakar Rally, Toyota Gazoo Racing have experienced highs and lows.

• South African Giniel de Villiers and Alex Haro are into the top 10 overall after finishing eighth on stage 6.

•The teams will rest on Saturday before Sunday's marathon stage.

Stage 6 of Dakar 2021 was a shortened route that saw the rally reach its mid-point at the city of Ha'il. The 347-kilometre timed section was another tough one, including large dune fields and rocky tracks, which made navigation difficult and punctures plentiful. South African Giniel de Villiers and Alex Haro opened the road, but lost 22min 20sec due to continued pain in De Villiers' neck, as well as two punctures. Despite this, the 2009 Dakar winner is back in the top 10 at the halfway mark, trailing leader Stephane Peterhansel (Mini) by 2:12min 12sec.

On the stage, Toyota's highest-place duo, Nasser Al-Attiyah and Mathieu Baumel consolidate their second position in the overall standings by recording the third-fastest time on the day, just 7min 16sec behind stage winner Carlos Sainz (Mini).

Al-Attiyah raced to pip Peterhansel to the finish by 18 seconds and means the Hilux crew is now 5min 53sec behind in the overall classification, despite suffering two punctures in the stage to Ha’il. Shameer Variawa and Dennis Murphy had one puncture during on the sixth stage, but still brought their Hilux home in 16th place on the day, 35min 35sec behind the stage winners. They are now in 32nd overall, trailing by 6:28min 33sec.

"Today was a day of consolidation for the team, as we reached the mid-point of the race," said team principal, Glyn Hall, from the bivouac at Ha'il.

"We're pleased to have Nasser and Mathieu in the thick of the fight, and Giniel and Alex back in the Top 10. Shameer and Dennis also recorded a good stage, and will have a good starting position for the Marathon Stage on Sunday," Hall said. The so-called rest day of the Dakar offers some respite to the race crews, but is a day of mad activity for the technical crews who will strip the race cars down to bare bones and check every component before repairing, replacing and reassembling the cars in preparation for the final week of the rally.

"Stage 7 is the marathon stage, which means the crews will race away from the bivouac at Ha'il to an isolated bivouac at Sakaka, where there will be no technical assistance. Any work that needs to be done on the cars, need to be done by the race crews themselves, using only tools and spares carried aboard the cars," explained Hall.

The marathon stage marks the beginning of the final week of the race, as the rally heads first to Sakaka and then on to Neom for a looped stage, before finally turning back towards the city of Jeddah via the town of Al Ula. The race will draw to a close with Stage 12, which takes place on January 15th. 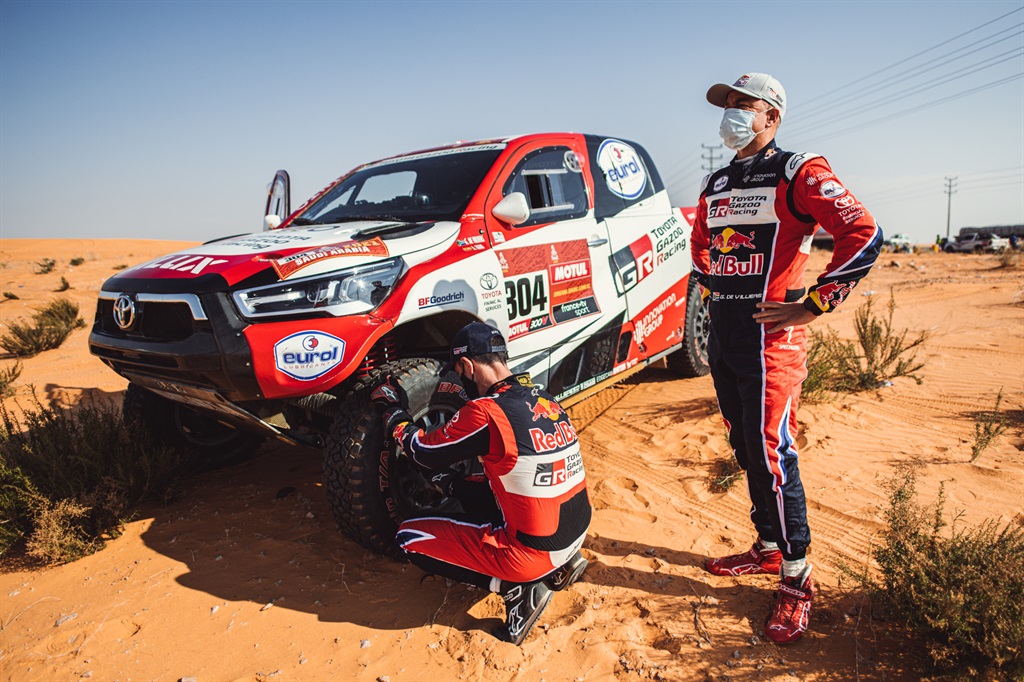 TGR_DKR21_Stage6-
Motorpress
We live in a world where facts and fiction get blurred
In times of uncertainty you need journalism you can trust. For only R75 per month, you have access to a world of in-depth analyses, investigative journalism, top opinions and a range of features. Journalism strengthens democracy. Invest in the future today.
Subscribe to News24
Related Links
DAKAR 2021 | Highs and lows for Toyota Gazoo Racing on fifth stage
Sainz wins Dakar stage six, Peterhansel leads
Next on Wheels24
Formula E: Jaguar Racing raring to go in Saudi season-opener