Toyota Gazoo Racing's South African team will undoubtedly raise the bivouac roof this evening as they celebrate taking P1 and P2 and P3 for stage 9 of the gruelling Dakar 2022 that looped around Wadi ad Dawasir in Saudi Arabia. 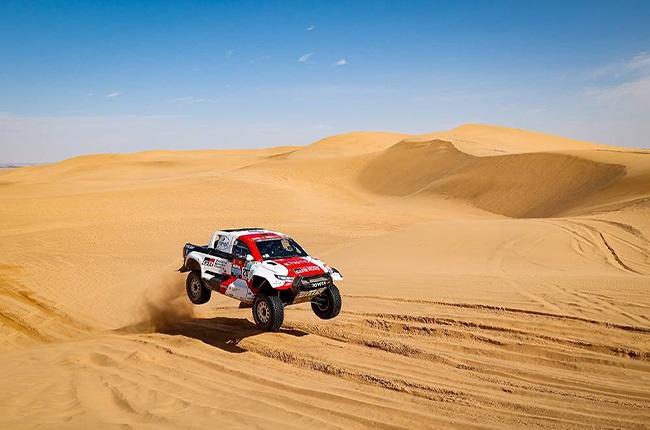 Toyota on the charge from the get go

De Villiers, Lategan and Al-Attiyah struck early in the stage, almost as if they had coordinated a military-precision strike to ensure the team secures all three positions on the podium today.

Dakar News notes that after a mere 40km, Lategan was in the lead and looking prime to secure another stage win over Nasser Al-Attiyah and Giniel De Villiers. However, the two Audis driven by Stéphane Peterhansel and Mattias Ekström were not far behind.

Sébastien Loeb experienced a tyre blowout today, yet tried his best to improve his overall time. When speaking to Dakar News after the stage, he said although he's not satisfied with second place in the general rankings, he has little room for manoeuvre to claw back the 39 minutes that separate him from Nasser Al Attiyah: "We did a good stage, I think. We pushed hard, from the start to the end. There were no mistakes with the navigation, but one little puncture where I tried to be a bit aggressive in the stones because I needed to regain some time. So we had to change the wheel, but apart from that, we drove a clean stage without problems".

Giniel talks after the stage win

De Villiers won the Dakar Rally overall back in 2009, but he hasn't tasted a step on the podium this year. Winning stage 9 has enabled him to claw his overall standing back to fifth in the car category in the competition. The circuit and off-road racing professional received abuse on social media after accidentally bumping into a fellow competitor riding a motorcycle. He hasn't let this incident shatter his will to win, although it will be challenging for him to catch Al-Attiyah for the overall lead with only three stages remaining.

Speaking to Dakar News today, de Villiers said: "It looks good. We had a nice clean stage today. I must say that the mechanics worked hard last night because we had a problem with the dampers over the last two days. But they did a great job, and the car was just unbelievable today."

He expounded that he experienced one slow puncture on the front left about 50km from the end of the gritty stage, but his tyre managed to hold out.

"We didn't stop because it wasn't necessary to stop. We're very happy for the team, and thanks to the guys for last night for their hard work. We've had some bad luck. Unfortunately, we had an oil pipe come off, and we lost one hour, but this race is very strange. We've had some challenges ourselves, and we will see," de Villiers said.

He explained that there are still three stages to go, so anything could still happen: "So, we'll keep on trying our best until then, for sure. I must say, the first week was not ideal. It was very stressful and mentally very, very tiring. Something I would not like to go through again, but that's behind us now. We're looking to the future. We cannot change the past. We're looking to the future."

Here are the overall standings for the car category at the end of stage 9 of Dakar 2022:

We live in a world where facts and fiction get blurred
In times of uncertainty you need journalism you can trust. For 14 free days, you can have access to a world of in-depth analyses, investigative journalism, top opinions and a range of features. Journalism strengthens democracy. Invest in the future today. Thereafter you will be billed R75 per month. You can cancel anytime and if you cancel within 14 days you won't be billed.
Subscribe to News24
Next on Wheels24
DAKAR | Toyota Gazoo Racing reflects on 'nail-biter' Stage 8 with no podium finish