#Dakar2020 set for a thrilling conclusion after penultimate stage

The winds that made the race so difficult on Wednesday largely died down for Thursday’s race, and increased humidity levels meant that the sand was slightly less treacherous on Stage 11. This no doubt came as a relief to all the competitors left in this year’s Dakar, as they dared to dream of finishing the event.

Saudi Arabia’s Empty Quarter contains many notorious dune fields, but yesterday they seemed to loosen their grip a little, allowing competitors to push harder on the return trip to Haradh from Shubaytah.

Stuart Gregory (#100) took advantage of yesterday’s faster speeds to edge closer to a Top Ten finish in the Original by Motul Category. Although he finished in a relatively modest 16th, he started today in 11th position in the General Classification. As an indication of how difficult the Dakar can be, only 27 Original by Motul Category riders remain in the event (a little over half the number who started) after Thursday’s epic total distance of 744km.

Mercia Jansen, Motul Area Manager for Southern and Eastern Africa, commented: “To have completed 11 Stages of the Dakar is undoubtedly an immense achievement. Motul is extremely proud of all the competitors in this year’s Dakar - particularly the riders and drivers from Southern Africa. We know as well as anyone that the Dakar isn’t over until it’s over, and we wish everyone all the best for today’s final Stage.”

Consistency has proved to be the calling card of the Sabertooth Motoring Adventure/Red-Lined team’s Nissan Navara (#342), with another Top Thirty finish yesterday. As the team start the final Stage to Qiddiyah, they are in 36th place in the General Classification, having made up one place.

Terence Marsh, CEO of Motul-backed Red-Lined Motoring Adventures, reported: “After sleeping in a remote location in the desert on Wednesday evening, the guys moved into Stage 11’s complicated dunes. Despite the distance, they had no major issues. Everything is on course for the final stage today but there are no guarantees – we know the Dakar can bite, and bite hard when it does! Hopefully the team get to finish what’s been a difficult and gruelling 2020 Dakar.”

Now that the end is almost in sight – today’s Stage is a relatively modest 447km – attention is naturally turning to who this year’s winners will be. In both the Car and Bike Categories, it would seem that the leaders have at least one hand on the coveted trophy – although as a veteran Dakar driver, Carlos Sainz (#305) knows better than to make any assumptions until he has crossed the finish line.

Sainz’s third place on Stage 11 was enough to give him a 10-minute margin of error over defending champion Nasser Al Attiyah (#300). Barring disaster, these two will be joined on the podium in Qiddiyah by Stéphane Peterhansel (#302) who reached a peerless total of 80 Dakar Stage Wins yesterday.

With so much at stake this late in the Dakar, tactics have been just as important as strength and speed. Leading the Bike General Classification, Ricky Brabec (Motul-backed Monster Energy Honda) rode at only around 70% on Stage 11, by his own admission. His cautious approach saw him surrender around half of his accumulated lead, but more importantly, meant that he avoided any eleventh-hour disasters. 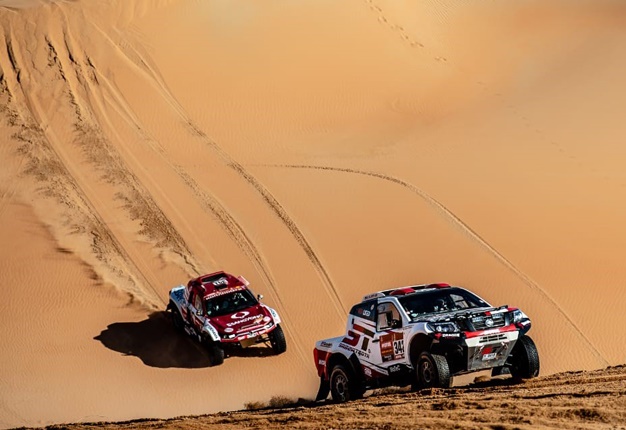 We live in a world where facts and fiction get blurred
In times of uncertainty you need journalism you can trust. For 14 free days, you can have access to a world of in-depth analyses, investigative journalism, top opinions and a range of features. Journalism strengthens democracy. Invest in the future today. Thereafter you will be billed R75 per month. You can cancel anytime and if you cancel within 14 days you won't be billed.
Subscribe to News24
Related Links
WATCH: Fernando Alonso's scary crash down a steep dune at #Dakar2020
Sand, rocks, and plenty of rolls on Stage 10 of #Dakar2020
Next on Wheels24
Dakar: A dream realised for SA's Schalk Burger and Henk Janse van Vuuren