Many of the teams competing in the previous T1 category suffered immense punctures during the 2021 edition of the race, as their smaller wheels, compared to the wheels allowed in the buggy class, simply could not handle the rough terrain. 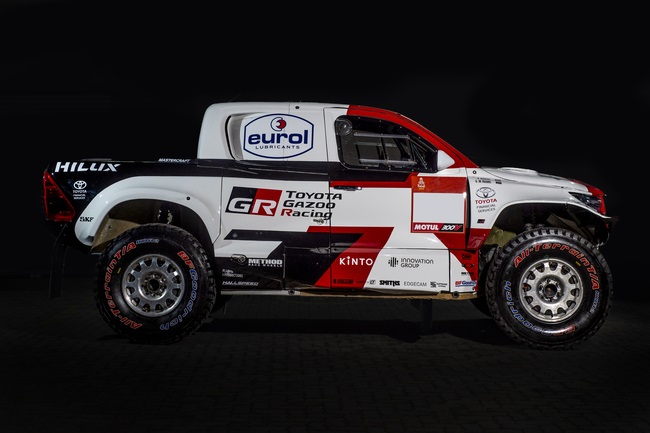 The teams and the FIA decided that it was necessary to make a rapid change in the sport's best interests and developed a new set of regulations for what is now known as the T1+ category.

"Despite a challenging development time frame which included metal worker strike, shipping delays and design changes, the team have managed to build and test a car that conforms to the new regulations," says Andrew Kirby, President and CEO, Toyota SA

Kirby made no bones about his expectations for the team come January. "I expect four cars to finish, three cars in the top 10, and we need to win."

"The beauty of these new regulations is that many of the existing cars competing in the T1 category can be retrofitted to the new specification and given a second lease on life. I believe that these regulations are the future and that other teams will follow," adds Toyota Gazoo Racing team principal, Glyn Hall. Toyota Gazoo Racing SA, based in Kyalami, used this opportunity to redesign and rebuild their car entirely and at the same time incorporate a new engine.

The team has bid farewell to the trusty naturally-aspirated V8 and installed a new turbocharged 3.5-litre V6 sourced from the recently launched Land Cruiser 300. The amount of boost pressure is carefully controlled by the FIA, and the power plant needs to conform to a reference power curve, but that still means that it produces 298kW and 700Nm, with the majority of that torque available in the lower parts of the rev range.

"Thanks to this reference power curve, the engine is under-stressed, which is great for reliability. We have done a couple of thousand racing kilometres in the local SACCS series as well as in testing in Namibia with no problems," says Hall. The new T1 category allows for bigger 37-inch wheels, increased suspension travel from 280mm to 350mm and a wider track.

The 37-inch in diameter and 320mm in width BF Goodrich KDR2 tyres are mounted on aluminium Method racing wheels that are both extremely strong and offer exceptional heat dissipation qualities.

The new chassis and suspension are wrapped in broader carbon fibre body panels finished in the latest livery design as seen in WEC and WRC, resulting in one mean looking Hilux bakkie.

Veteran driver Giniel de Villiers has been instrumental in the rapid development process. He says:

We have done an immense amount of work in getting the engine, suspension and tyres to work together as a package. The tyre and suspension combo has been particularly tricky to get right as we understand how the bigger tyres react to changes. It is a systematic process that we have managed to refine in testing across various terrain. De Villiers believes that this development and testing process has been worth it, "For the first time in many years, I am excited for the Dakar. The car is nice to drive and puts a smile on my face every time I get behind the wheel."

2019 Dakar Rally winner Nasser Al-Attiyah is equally excited, "I continue to be impressed by the new car, and I'm particularly impressed with the tough terrain that we can tackle with the new, bigger tyres. The engine delivers excellent power and torque, and we are looking forward to testing the car further before the Dakar commences in January."

While Toyota Gazoo Racing has undoubtedly taken a big step forward, so has the competition. Audi will be entering a big-budget team with a partially electric vehicle, while Prodrive will be campaigning a biofuel-powered BRX.

"We have always focussed on ourselves, interpreted the regulations as best as possible and applied them to our design most efficiently. None of us has raced against each other, so seeing what happens in that first stage will be enlightening. One thing is for sure, we will race as hard as we can for those 13 days," adds Hall. Finding their way in the dessert

Organisers have changed the roadbooks used by competitors to follow the route and check in to all the necessary waypoints along the way. The roadbook is now in a digital format and is only given to teams a few minutes before the start of the stage. This levels the playing field as it is now about who can interpret the road book the most efficiently instead of who can prepare the most thoroughly night before, which often saw navigators pouring over maps late into the night.

"This new format has forced us to work differently in the car as we have no prior idea of where we are going. It would help if you were focused and compared the notes to what you see outside the car. The driver and navigator have to work together in the car to be successful", notes navigator Mathieu Baumel

"As a team, we are excited about this change as it levels the playing field and rewards the best car and the best driver," concludes Hall. A mix of youth and experience

The drivers who did duty in 2021 remain the same; however, there have been a few changes in the navigator seats.

Qatar's Nasser Al-Attiyah and French co-driver Mathieu Baumel will be spearheading the attack for the team. The 2019 Dakar Rally winners will again have Giniel de Villiers (2009 Dakar winner) as a teammate, and the South African will be partnered with co-driver Dennis Murphy for the 2022 edition of the race.

South Africans Henk Lategan and Brett Cummings will return to the Dakar Rally to show their pace over the entire race. The final car in the line-up will be driven by Shameer Variawa and co-driver Danie Stassen, both from South Africa. 2022 Dakar Rally will be tough, but Toyota is looking to win it.
Supplied

For Lategan, his second trip to the Dakar means getting to finish what he started. Lategan showed tremendous pace in the early stages of the 2021 event but unfortunately rolled his Hilux and was forced to retire with a shoulder injury.

"It has been a tough year that started with a tough lesson. I have put in a lot of work in training, rehab and my overall mindset and am looking forward to going back with a better mindset and being better prepared as I now have an idea what to expect," said Lategan.

The 2022 Dakar Rally kicks off on the 1st of January in Hail, Saudi Arabia.

KEEP UPDATED with the latest motoring news and insights by subscribing to our weekly newsletter, 'LET'S DRIVE'.

We live in a world where facts and fiction get blurred
In times of uncertainty you need journalism you can trust. For only R75 per month, you have access to a world of in-depth analyses, investigative journalism, top opinions and a range of features. Journalism strengthens democracy. Invest in the future today.
Subscribe to News24
Next on Wheels24
DAKAR | 'This one's for Dr van Zyl' - Glyn Hall on Toyota Gazoo Racing's 2022 victory