• Toyota Gazoo Racing will be entering four crews in the 2021 Dakar Rally.
• The Hilux bakkies have been completely rebuilt in recent weeks with new engines.
• Still a lot has to be done before the cars, and spare parts, are loaded onto an A330 later in December.
• For more motoring stories, go to Wheels24.

It is a hive of activity at Toyota Gazoo Racing, near the Kyalami Grand Prix Circuit in Johannesburg, as the team ensures their four cars are fresh and ready for the 2021 Dakar Rally, which starts on 2 January.

The team, which has competed at the Dakar since 2012, will field a mix of highly experienced specialists, together with relative newcomers to the rally-raid world for 2021. This will give Toyota Gazoo racing a potent attacking force in the form of Nasser and Mathieu; as well as Giniel and Alex while building depth and experience in the form of Henk and Brett, as well as Shameer and Dennis. Even though most of the staff have been living on site since April, to minimise their exposure to Covid-19, there is still a lot to do before the cars, and spare parts, are loaded onto an A330 later this month.

Spare parts are being manufactured and are carefully packaged, labelled and sorted in a variety of crates, as they will be sent via airfreight along with the bakkies.

There have been several changes to the rules for the 2021 edition of the Dakar rally. There will be a strictly enforced speed limit of 180km/h, which should level the playing field slightly and prevent buggy type vehicles from gaining an advantage in the wide-open sections.

The most significant change, however, is in terms of the navigation. The teams will now receive the roadbook on an electronic tablet only 20 min before their start time. This means that teams will have no idea of the route, and navigators will not have a chance to prepare the roadbook in their own style or do any preparation like studying satellite images.

"I am a bit apprehensive, it was nice to be able to go through the road book the night before and familiarise with what's to come, now you just need to take it as it comes," said Toyota Gazoo racing navigator Brett Cummings.

This change will hopefully level the playing field for all teams but will put added pressure on the navigator in the car as they will have to think on their feet while staying on the route and trying to find the marked and secret waypoint. 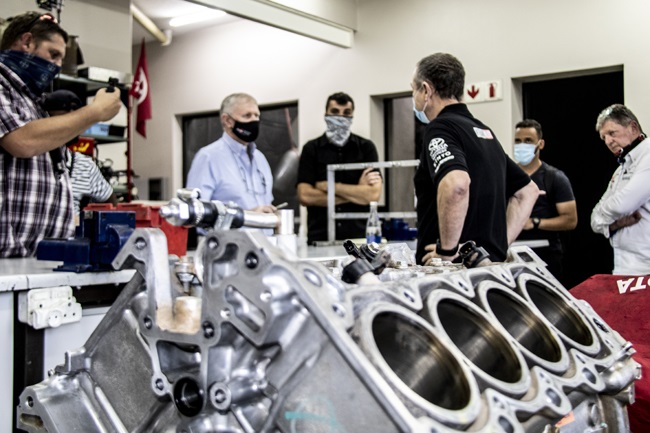 The four cars that will be entered all competed in Dakar last year, but have received a frame-off restoration in the previous few weeks. They have new engines, which have been run in on the engine dyno. The front and rear diffs are brand new, while the Sadev gearboxes have been completely rebuilt using new parts.

Every part of the drivetrain, including side shafts and propshafts, is new. The Reiger dampers, of which there are two at each corner of the car, have been rebuilt and tested on the shock dyno in-house to ensure that they continue to perform optimally even when reaching temperatures of 200 degrees Celsius.

The team has also worked with local manufacturer Powerbrake to develop a new brake disc and pad combination, which should alleviate some of the issues they had last year.

Fortunately, the team have the facilities and tooling available to develop and manufacture most of the parts for these cars in house and those parts that they do not manufacture themselves are sourced from local South African suppliers, which has meant that they have been able to avoid Covid-19 supply chain disruptions.

The team also obtained a special permit, which allowed them to complete an extensive training programme in Southern Africa, with Giniel de Villiers completing around 2 000km in addition to his participation in the local South African Cross Country Series.

Drivers Henk Lategan and Shameer Variawa recently return from a familiarisation trip to Saudi Arabia where they trained in the dunes using Side-by-Side type vehicles. What are their chances

The route is said to be more technical which should suit the four-wheel drive Hilux better than some of the competition.

"We are hoping that it will be a very tight race, but we are quietly confident, following lots of testing," said Toyota Gazoo racing team principal Glyn Hall.

"The biggest competition will come from the regulars like Carlos Sainz, Stephane Peterhansel and Sebastian Loeb although he is driving a brand new car which could come with some issues. However, my team mate Nasser is the quickest in the world right now while Toyota Overdrive pilots such as Yazeed Al Rajhi, Bernhard ten Brinke and Jakub Przygonski are also extremely fast. There are more than ten teams that can win the race," said Toyota Gazoo racing driver, Giniel de Villiers.

"People want to know if we can win the race," added Hall. "The answer to that question is a simple yes. We have won the race before, and we can certainly do it again."

"We have a good team in terms of experience and youthful talent when it comes to the drivers and the navigators, and over the past decade, the Hilux has proved that it has the pace and reliability it needs to win the race. But there will also be a few new factors at play. Many officials and competitors felt that the 2020 race was too fast, and perhaps not technical enough. Some of these issues have been addressed for the 2021 race, which should level the playing field a little more," said Hall. What about the tyres?

In 2020 the team suffered 35 punctures, and that arguably cost them the race. BF Goodrich developed a new tyre, but the team tested it in the Parys round of the SA Cross Country Series and didn't find it much better.

They have decided to stick to the same tyres that were used in 2021, but have made some changes to the suspension set up of the Hilux and are hoping that will partly solve the puncture issue. The team will also be taking an additional 80 tyres along so that even the three spare wheels that they carry are fitted with new rubber on every stage.

"In the beginning, I am going to go out and try to forget about the tyres; there is no point in thinking about it too much. I am using the same tyres because there hasn't been time to manufacture anything superior. It is also risky to go with a tyre that has not been proven; I will rather race with something I know, I am just hoping that the improvements we made to the suspension will help the tyre a little bit. We practice the tyre changes, and it only takes us around one minute and ten seconds, so we are ready to handle things if we do puncture," said de Villiers. This will be Henk Lateran's first trip to the Dakar rally while his navigator Brett Cummings has won the Malle Moto motorcycle category in a previous edition. The pairing will be using 2021 as an opportunity to gain experience to prepare themselves for future events.

"I am not entirely sure how I will manage the situation as there are many unknown factors in the race. We know we have the pace off-road, but the dunes and those high speed rolling sections are different to the conditions we race on in South Africa and can be quite intimidating," said Toyota Gazoo racing driver, Henk Lategan.

There are a few scenarios that are difficult to practice locally, the endurance, the mental preparation and your nutrition. "Eating the right things to get yourself all the way through the event and keep your concentration levels at a peak will play a big role in getting through all the stages safely," added Lategan.

"We will pick a comfortable pace, there is no point in going slowly as that can also cause you to make mistakes, but we don't want to push too hard and take risks either. The aim is to try and have clean days, one clean day after another will help me build my confidence. The most important thing will be getting to the end so that we have information to work with for future events. This year is definitely a learning year and its important not to get caught up in some kind of race," said Lategan.

For Shameer Variawa, this is a second attempt at the Dakar rally, armed with extremely competitive machinery this time around; he is looking forward to rolling off the start ramp come January.

"I have been to Dakar and know what to expect. I have travelled to Saudi Arabia many times, so I know the country well. I just want to go out there and do my best, and I think the results will come from there," said Variawa. Racing during a pandemic

Although there had been much uncertainty as to whether the race would go ahead, the ASO who organises the Dakar Rally has implemented several measures to do so during the current pandemic such as periodic testing of all drivers and crew members.

Crew and teams will have to live in mobile homes or tents in the bivouac, where some liked to spend the night in local hotels previously. There will also be no communal dining area; teams will be responsible for their own catering.