Unlike the previous edition at the end of May, the roster for this round was made up of the coastal rounds for various inland categories that form part of the tour.

Arangies topped this off by winning all three of the day's races while setting three fastest laps below the one-minute mark. In the first two races, he had fierce competition from Angel, who finished as runner-up on both occasions. Budnik completed the podium in Race 1 but lost out to Paulo Loureiro (Combined Racing BMW) in Race 2 following a good tussle between the pair. Loureiro finished as runner up in the third race ahead of Morgenrood. The day's first major incident happened in the Car Care Clinic SuperHatch qualifying session. Melanie Spurr lost control of her Car Care Clinic Volkswagen while negotiation the esses in severe windy conditions. The car flipped and landed on its roof in a very dangerous position. The rest of the field did not hesitate to stop and check on the well-being of their fellow competitor, who fortunately did not suffer any significant injuries.

Jonathan du Toit (Trans Africa Racing Honda), Brett Garland (AutObarn Honda) and Andre Dannhauser (Pro Auto Rubber Opel) delivered two superb threeway battles in the first two of three races. After jostling for position throughout Race 1, Du Toit led Garland and Dannhauser over the line. Race 2 saw an even closer contest with only 0.4 of a second separating the trio at the finish line, with Garland beating Dannhauser and Du Toit. The latter took the day's final win, this time with a clear advantage over Garland, who held off Dannhauser for the runner-up position. Due to the size of their entry list, the Pozidrive VW Challenge races were split into separate heats for Class A & C and B. Dawie van der Walt (Universal Motorsport) took a double-victory in Class A while Wayne Masters (Performance Masters) finished as runner-up on both occasions.

Completing the podium on both occasions was Marco Busi (Automan Fitment Centre), a driver from Cape Town who made his championship debut. In Class C, Pierluigi Muzzulini (FSS International), Mohammed Karodia (Universal Motorsport) and Ian Walker (Cycles United-Mellow Velo) also repeated their positions in both races. Both Class B races were won by Stiaan Kriel (T-Rex Racing), while Stuart Mack (Bluebelt Pozidrive) finished third in both races. In Race 1, Karshin Naidoo finished as runner-up while Leyton Fourie (Universal Racing) came back from an incident with Charisse van der Merwe (Hot 102.7FM) in Race 1 to finish as runner-up in Race 2.

Race 2 also saw an opening lap pile-up between Ethan Coetzee (JRT Racing), Aldin Haupt (Haupt Racing) and Lindsay Clur (Mirage Leisure) resulting in extensive damage to the pit wall, resulting in an extensive delay to have this repaired before the recommencement of the day's races. The full event, streamed live by Wheels24, can be watched here.

The next round of the Extreme Festival tour will take place at Zwartkops Raceway in Pretoria on 22-23 October. 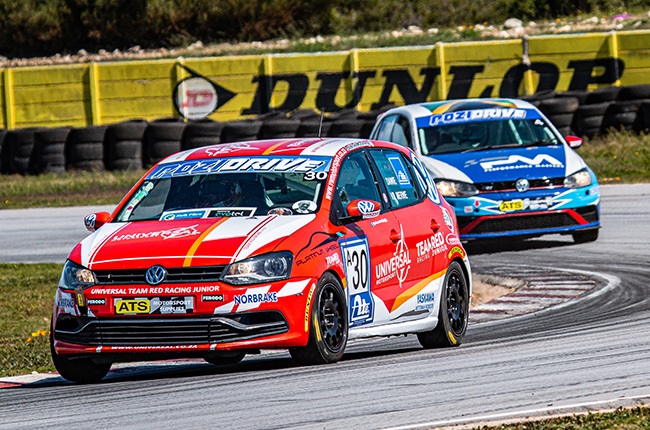 Pierluigi Muzzulini
Wheels24 Reynard Gelderblom
We live in a world where facts and fiction get blurred
In times of uncertainty you need journalism you can trust. For only R75 per month, you have access to a world of in-depth analyses, investigative journalism, top opinions and a range of features. Journalism strengthens democracy. Invest in the future today.
Subscribe to News24
Next on Wheels24
Sideways in the dirt - Going racing at the SACCS Nampo 400 in Ford's Ranger Raptor

Subscribe to newsletters
Lockdown For
DAYS
HRS
MINS
Brought to you by
Voting Booth
Who do you feel was at fault for Verstappen and Hamilton's Italian GP crash?
Please select an option Oops! Something went wrong, please try again later.
Verstappen
25% - 1215 votes
Hamilton
42% - 2040 votes
They were both at fault
33% - 1587 votes
Previous Results
Car Doctor
WATCH | How to protect yourself from buying a water-damaged used car