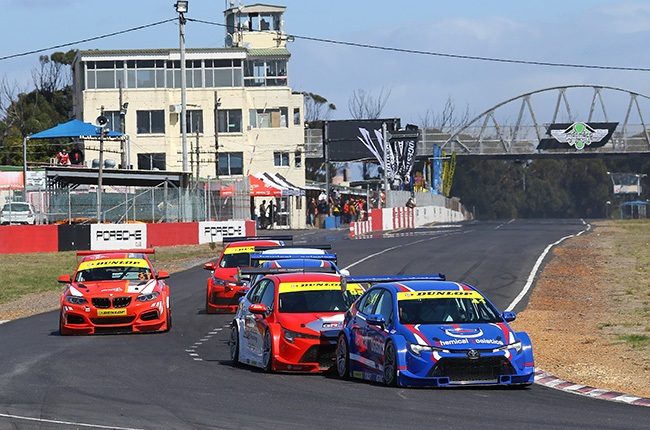 • The Global Touring Cars season opener took place at Killarney over the past weekend.

• The second round of the 2021 GTC Championship will take place at Zwartkops on 16-17 April.

Michael van Rooyen and Julian van der Watt shared the first two Global Touring Cars race victories for 2021, while Brad Liebenberg recommenced his dominance in the GTC SupaCup this past weekend (19-20 March) at Killarney International Raceway, while a host of drivers and a returning manufacturer took maiden podium finishes.

Who do you think will come out tops in the second round to take place next month at Zwartkops Raceway? Email us, or please leave a comment below.

The first race produced a four-way battle for the lead, with the quartet covered by one-second up to the halfway point. It was Wolk who held off Van Rooyen in the opening stages in a side-by-side battle, with Temple and Thompson in close pursuit. Van Rooyen took the lead into the second half of the race while Thompson slotted into third place.

The race concluded with Van Rooyen's first Killarney International Raceway victory and Wolk crossing the line runner-up closely behind. Thompson took his maiden podium finish, with Temple finishing fourth. Further back, Van der Watt and Mdakane battled; however, contact between the pair near the end of the race saw the Ford driver losing ground. Initially, it was Mdakane who was the fifth driver to cross the line, but a penalty applied after the race saw the pair changing positions. Originally planned as a 30-minute plus one lap endurance heat, Race 2 was shortened to 20-minutes following delays in the programme. Van der Watt rapidly moved to the front of the field and built up a comfortable margin to win his first race in his fifth start.

Wolk made his way into second place and made it two podiums for the day while Mdakane held off Temple in a good tussle to take his first podium finish since joining the class in 2020. They were closely pursued over the line by Thompson while Van Rooyen completed the field.

Michael Pitamber came back from an incident in Friday's final practice session, which saw his Toys R Us Volkswagen SupaPolo stranded on the outside of Fastron Corner to set the seventh-fastest time ahead of Manogh Maharaj (SMD Exotics). Debutants Dawie Joubert (Wild Rose Gin Rembrandt Racing) and Nick Davidson (Stu Davidson & Sons) slotted onto the grid ahead of Johan de Bruyn (OdorCure) after the latter had an accident early into the qualifying session.

Liebenberg dominated Race 1 to open his 2021 account with a win as Mogotsi made his way into second place in the order to finish as runner-up. Variawa held off Campos to take a podium finish on his debut. They were closely followed over the line by Kruger. Pitamber made his way into sixth place ahead of the more experienced Bezuidenhout and Maharaj. Davidson, Joubert and De Bruyn completed the field.

Liebenberg's perfect weekend concluded with a win in Race 2 after a good battle with runners-up Kruger and Mogotsi for the lead. The podium battle also included Campos, who was forced to retire near the end of the race. Variawa continued his impressive debut with a fourth-place finish while Pitamber stayed in front of Bezuidenhout again in the battle for fifth place. Joubert, De Bruyn and Davidson all improved on their positions from Race 1 ahead of Maharaj.

The second round of the 2021 GTC Championship will take place at Zwartkops Raceway in Pretoria on April 16-17. Global Touring Cars would like to thank their partners Dunlop Tyres South Africa, ATS Motorsport and SKF for making 2021's season possible.

We live in a world where facts and fiction get blurred
In times of uncertainty you need journalism you can trust. For only R75 per month, you have access to a world of in-depth analyses, investigative journalism, top opinions and a range of features. Journalism strengthens democracy. Invest in the future today.
Subscribe to News24
Next on Wheels24
Wolk, Liebenberg stay on top of GTC points tables as debutant takes victory