• Round 2 of the 2021 Global Touring Cars championship takes place at Zwartkops this weekend.

• This is the first GTC Championship outing to take place at the track since July 2019.

• Robert Wolk is the most recent winner at the circuit, and heads up the leaderboard with 35 points.

The battle for the 2021 Global Touring Cars title moves to Zwartkops Raceway in Pretoria this coming weekend (April 16-17) for the second round of the season, with Robert Wolk and Brad Liebenberg heading up the respective points tables.

This will be the first of two 2021 rounds to be hosted at the circuit, which has already hosted 12 rounds of the series in the past five seasons. Due to the impact of the global COVID-19 pandemic, changes in driver line-ups and new technical regulations, it will not be that much of a familiar environment for a large portion of competitors despite this being the home circuit for most of them.

While the GTC SupaCup had two rounds at Zwartkops Raceway in 2020, this coming weekend will see the first GTC Championship outing since July 2019 at the venue. Robert Wolk (Chemical Logistics Toyota Corolla) is the most recent winner at the circuit and heads up the leaderboard with 35 points. Julian van der Watt (Euro Performance Ford Focus ST) – one of four drivers who will make his first GTC Championship appearance at Zwartkops Raceway – trails Wolk by four points and will be eager to add a second win to his tally following his maiden victory in the season opener.

Trailing Van der Watt by two points is Michael van Rooyen (Toyota Gazoo Racing South Africa Corolla), who, along with Wolk, has also competed at Zwartkops Raceway before in the GTC Championship and has also taken one win already in 2021.

Tied for fourth place on the points table are Lee Thompson (Universal Racing BMW 2 GTC) and Scott Temple (Chemical Logistics Toyota Corolla) on 24 points. Thompson, who rounded out the podium in his debut race, is one of the most experienced drivers in various saloon car formats around Zwartkops Raceway and could be a formidable challenger, while Temple will be eager to take his first podium finish. Mandla Mdakane (Toyota Gazoo Racing South Africa) moved into the GTC Championship in 2020 but will celebrate a milestone this weekend with his 50th race start in the series. He will be looking forward to adding to his tally of 22 points after finishing the weekend at Killarney International Raceway on the podium.

GTC SupaCup leader Liebenberg up against a formidable challenge

Reigning GTC SupaCup Champion Brad Liebenberg (Sparco / Nathan’s Motorsport) had a dream start to the 2021 season with two victories and being the fastest on track throughout the weekend to claim a full house of 43 points. Jonathan Mogotsi (Volkswagen Motorsport South Africa) occupies second place on the points table, 12 points behind Liebenberg and closing in on his maiden victory after a career-best runner-up finish in Cape Town. 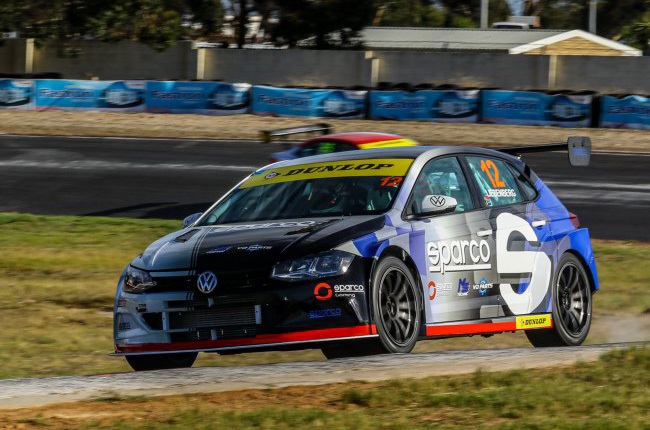 Jeffrey Kruger (Universal Racing) is the driver with the statistics in his favour from 2020’s two rounds. With three wins from four starts at the circuit and the current lap record, he will be eager to make his first visit onto the top step of the podium for 2021 and add to his points tally of 27. Just one point adrift of Kruger is Saood Variawa (SV Safaris / Varia / Mariner), the highest-placed debutant heading into Round 2 and with one top-three finish already to his name. Mikael Pitamber (Toys R Us) and Andre Bezuidenhout (Motul Team Perfect Circle) respectively have accumulated 18 and 14 points in Cape Town and will be eager to continue their on-track rivalry. In seven career starts, Jason Campos (Turn 1 Insurance Campos Racing) has narrowly missed out on the podium on three occasions. He will be eager to break into the top-three and add to his 12 points. Dawie Joubert (Wild Rose Gin Rembrandt Racing) accumulated seven points in his home round in Cape Town and will be looking forward to his first outing at Zwartkops Raceway in a Volkswagen SupaPolo. Manogh Maharaj (SMD Exotics) has five points to his name and will also welcome the support of his teammate Shaun Duminy who had to miss the season opener. Tied for tenth place on four points are Johan de Bruyn (OdorCure) and debutant Nick Davidson (Stu Davidson and Sons). Paul Hill (Kalex Racing) will also be making his first outing for 2021.

Friday will see the final opportunities to fine-tune car setup with three practice sessions scheduled. Qualifying and the battle for the two Dunlop Pole Positions will take place on Saturday morning ahead of the two races. Race 1 is scheduled to start at 12:30 will be contested over 12 laps. The second race will be contested over 16 laps at 15:50.

Due to the continued National State of Disaster brought on by the COVID-19 pandemic and in line with the restrictions implemented on sporting events hosted in South Africa, there is still a prohibition on spectators attending motorsport events. The event will be streamed free-to-air via the Extreme Festival’s social media channels.

We live in a world where facts and fiction get blurred
In times of uncertainty you need journalism you can trust. For only R75 per month, you have access to a world of in-depth analyses, investigative journalism, top opinions and a range of features. Journalism strengthens democracy. Invest in the future today.
Subscribe to News24
Next on Wheels24
History in the making? Audi reveals all-electric challenger to take on 2022 Dakar Rally