• Seef Fourie Jnr clinched the Round 2 race victory this past weekend.

• The race marked the first outing for the series at the circuit since the 2019 season.

Seef Fourie Jnr celebrated the Liqui Moly INEX Legends Round 2 victory under the floodlights at The Rock Raceway this past Saturday (September 11), with the category producing four fiercely contested battles throughout the field.

The championship round formed part of the memorial event in honour of the late Gert Oosthuizen at the circuit, located in Brakpan. This was only the second round of the championship in a year that has already seen the calendar severely impacted by two strict national lockdowns. It also marked the first outing for the series at the circuit since the 2019 season. Like the previous time, the round saw a change from the traditional three-race format, switching to a four-race programme with two afternoon races around the full circuit before two night races around the oval.

This also saw two separate grid-draws taking place for both the full circuit and oval portions of the day. Charl Roux drew pole position for Race 1 ahead of Richard van Heerde. Row 2 saw Gerhard Roux lining up ahead of Jagger Robertson, with Johann van de Venter and Riaan Draper completing the top-six. Devin Robertson and Fourie Jnr completed the grid. 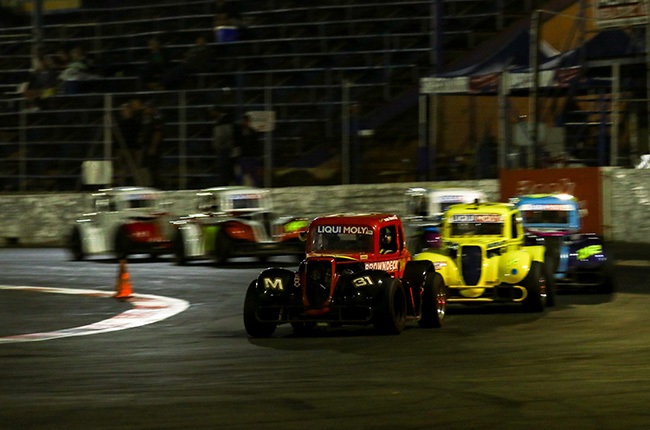 It did not take the pair at the back long to establish themselves as contenders in the Race 1 battle for the lead with Jagger Robertson. Draper and Charl Roux retired early in the race, and after nine laps, the red flag was deployed due to debris on the circuit brought on by the aggressive line taken by the drivers through Turn 2. A five-lap sprint to the flag followed after the clean-up with Jagger Robertson looking set to hold off Devin for the win, but a racing incident between the pair on the final lap saw Jagger pointing the wrong way in the penultimate corner. Devin Robertson took the win, with Fourie Jnr finishing as runner-up closely behind the winner. Gerhard Roux picked up the final podium position ahead of Jagger Robertson. Van de Venter and Van Heerde completed the results.

The original draw was inverted for Race 2, with Charl Roux's mechanical issues resolved. Draper, however, had to withdraw from the event. With the sun setting, Fourie Jnr held off a host of challenges from Devin Robertson to take a lights-to-flag win. This time, it was Jagger Robertson who picked up the final spot on the podium, with Gerhard Roux finishing in fourth place a bit further back. Charl Roux held off a persistent Van Heerde for fifth place, with Van de Venter completing the field. Following the supper interval, it was Gerhard Roux who lined up in pole position for Race 3 with Jagger Robertson alongside him. Fourie Jnr and Charl Roux shared the second row. While Draper drew fifth place, his withdrawal saw Van de Venter, Van Heerde and Devin Robertson all gaining positions on the grid.

Although some of the drivers did not participate in the previous Liqui Moly INEX Legends night races, all the drivers are accustomed to competing at ovals under lights. Gerhard Roux took the early lead, but it was Fourie Jnr's experience in this format that came to the fore as he strategically picked off Jagger Robertson and Roux to move into the lead. Fourie Jnr took his second victory of the day, with Gerhard Roux holding off Devin and Jagger Robertson for second place. Van Heerde and Charl Roux traded positions, with Roux taking fifth place. Van de Venter completed the results. Devin Robertson had the upper hand from the inverted grid in Race 4 and built up a margin of comfort ahead of the pursuing pack. But after running wide, he made contact with the wall on the back straight, which brought out a full-course yellow flag. From the restart, Van Heerde held off Jagger Robertson and Fourie Jnr for the win. Charl Roux took fourth place following a close battle with Gerhard Roux and Van de Venter.

With a podium in all four races, including his two wins, Fourie Jnr took the Round 2 victory ahead of Jagger Robertson and Gerhard Roux. This also saw Fourie Jnr and Jagger Robertson head up the Professional class with Devin Robertson in third place. Gerhard Roux's consistency saw him take the Masters class honours ahead of Van Heerde. A competitive performance from Van de Venter saw him rounding out the podium ahead of Charl Roux.

Round 3 of the 2021 Liqui Moly INEX Legends championship is scheduled to take place at Red Star Raceway on October 15-16.

We live in a world where facts and fiction get blurred
In times of uncertainty you need journalism you can trust. For only R75 per month, you have access to a world of in-depth analyses, investigative journalism, top opinions and a range of features. Journalism strengthens democracy. Invest in the future today.
Subscribe to News24
Next on Wheels24
SA's Brad Binder to start 12th on the grid for Aragon MotoGP while brother Darryn on pole in Moto3