• The Nissan GT-R has become the go-to vehicle to compete in the Simola Hillclimb with.

• This year, three GT-Rs are in contention for top honours up the 1.9km-long Simola hill.

• Driver Franco Scribante is currently the fastest of the GT-R competitors.

The Nissan GT-R has always been synonymous with the Simola Hillclimb, and the 2021 edition of the race is no different. For this year's event, three GT-Rs compete for top honours and have dominated the Modified Saloon Car class.

The first is the R35 GT-R of Franco Scribante. Scribante won the Classic Conqueror title on Friday in a 1972 Chevron B26. The Simola Hillclimb veteran ran consistently in the low 40-second bracket, which would have been enough to win the race a few years ago, before hitting a snag in the first qualifying run with misaligned electronic settings.

He returned in the second qualifying round with the first sub-40 second run in the Modified Saloon class. He remained at the top of the charts for the day with that time of 39.581 seconds and is well-positioned to defend his King of the Hill title today, 5 September. 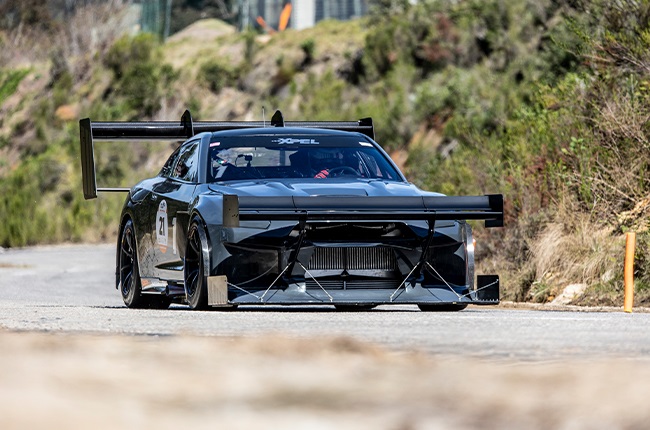 Baard started his campaign late and did not compete in the morning's test runs. He opted to give his team time to tweak the fuel supply system on his highly modified GT-R. It meant that his first run was during the first Qualifying run of the day.

The third GT-R is piloted by Wade van Zummeren. Van Zummeren usually sends all the pit crews running for their ear protection as his rear-wheel drive R34 GT-R screams so loudly that it echoes off the nearby houses. Van Zummeren dropped to 40.507 seconds up the 1.9km hill during the third qualifying round, positioning him well for the final qualifying rounds and class shootout on Sunday.

Stefan Haasbroek, marketing director for Nissan South Africa, says: "Perhaps the most telling statistic for us is how the number of GT-R entries at the Simola Hillclimb has grown over the last decade. After its first win, its breadth of capabilities and ability to lay down its power through all four wheels have become well known and more and more competitors have started competing in the Nissan GT-R." Wade van Zummeren
Motorpress
We live in a world where facts and fiction get blurred
In times of uncertainty you need journalism you can trust. For only R75 per month, you have access to a world of in-depth analyses, investigative journalism, top opinions and a range of features. Journalism strengthens democracy. Invest in the future today.
Subscribe to News24
Next on Wheels24
Double trouble as SA's Darryn Binder joins brother Brad in MotoGP for 2022