• Michael van Rooyen finished this past weekend's race as the points leader.

• The next round will take place at the Aldo Scribante Racetrack in Gqeberha.

Michael van Rooyen finished the second round of the 2021 Global Touring Cars season at Zwartkops Raceway this past weekend (April 16-17) as the points leader, while Scott Temple and Jason Campos claimed their maiden race wins.

The race day, filled with action and drama, also left the title battles in both the GTC Championship and GTC SupaCup wide open, heading into the next coastal visit for the 2021 season.

Van Rooyen, Temple resilient at the front of the GTC field

Who do you think will come out tops in the next race to take place at at the Aldo Scribante Racetrack? Please email us, or share your thoughts in the comment section below.

Race 1 was halted on the opening lap following an incident into Turn 1 between Van der Watt, Temple and Mdakane, while Thompson had to react quickly to avoid the trio in front of him. Temple emerged as the only driver sustaining enough damage to prevent him from taking the restart. As the race recommenced, Van Rooyen held off Wolk for the lead through the first series of corners. 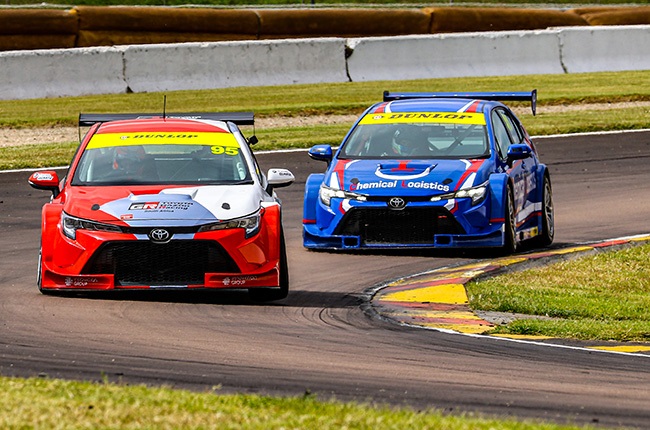 Van Rooyen set the fastest lap and went on to take his first race win at Zwartkops Raceway, with Wolk finishing as runner-up. He was closely followed over the line by Van der Watt and Thompson. Mdakane, who celebrated his birthday on the weekend as well as his 50th start in GTC, finished in fifth place. Crucially, the WCT Engineering team completed repairs to Temple's car with enough time to get onto the circuit again and complete eight of the 12 laps. Apart from earning a classification and points, it also saw him take pole position for Race 2.

Temple and Mdakane held off the podium finishers from Race 1 in the afternoon's reverse-grid second race. The 16-lap race got neutralised due to one of the GTC SupaCup entrants getting stuck in a precarious position requiring the Safety Car to be deployed. This resulted in a two-lap sprint for victory upon resumption.

Temple managed to open up a slight margin over the Toyota Gazoo Racing South Africa pair to take a maiden victory and podium finish, a superb end to the day given the drama in Race 1. He also set the fastest lap of the race. Mdakane crossed the finish line as runner-up, which was his best result to date. At the same time, Van Rooyen completed the podium and took a one-point lead in the championship. Wolk held off Van der Watt and Thompson for fourth place. Following the aborted start in Race 1, the field regrouped on the grid. Kruger had his work cut out to retain the lead from Liebenberg and Mogotsi. He held off the pair in a battle for the win that closely resembled the trio's 2020 season-opening tussle. Kruger also beat his own lap record in the process. Campos finished in fourth place while holding off Variawa.

Further back, Bezuidenhout, who made up positions in the opening laps, finished in sixth place. Duminy was closely pursued to seventh place by Pitamber and Davidson. De Bruyn took the final point in tenth place and was also the last driver to finish on the lead lap ahead of Hill and Maharaj. Joubert retired after one lap. Mogotsi moved into an early lead in Race 2 but experienced mechanical difficulties after the opening laps and lost positions. This saw Campos moving to the front of the field and in a relatively comfortable position until the midway point when the safety car was deployed to allow the marshals to remove Maharaj’s stricken Volkswagen SupaPolo. Campos, who was experiencing brake difficulties, held off Kruger and Liebenberg in the two-lap sprint for the flag. Like Temple, Campos also achieved his first podium finish at the top step, becoming the first driver other than Kruger and Liebenberg to take a victory. Kruger finished as runner-up, while Liebenberg's third place marked the first weekend in the history of the class that he didn't find himself on top of any race or session. He did set the fastest lap and still retains the championship lead. Variawa beat Mogotsi to fourth-place while Pitamber completed the top-six. Bezuidenhout, Davidson, Joubert and De Bruyn took the last points-paying positions. Both Maharaj and Duminy retired while Hill did not start the race.

Round 3 of the 2021 Global Touring Cars season will see the field returning to the coast at the Aldo Scribante Racetrack in Gqeberha in support of the Extreme Festival.

We live in a world where facts and fiction get blurred
In times of uncertainty you need journalism you can trust. For only R75 per month, you have access to a world of in-depth analyses, investigative journalism, top opinions and a range of features. Journalism strengthens democracy. Invest in the future today.
Subscribe to News24
Next on Wheels24
15th to 5th: SA's Brad Binder impresses with resurgent fifth place at Portuguese MotoGP