• The Golf 8 GTI continues its winning run in the 2020 GTC championship.

• The Volkswagen team converted their early weekend pace into another victory.

• Drama ensued in the second race of the weekend.

Volkswagen Golf 8 GTI racecar is proving to be quite the challenger in the 2020 Global Touring Cars championship. The Golf 8 GTI, albeit a heavily-modified version of the roadgoing car, has won the opening race at Red Star Raceway near Delmas and has done so again in Port Elizabeth this past weekend.

Racing around the Aldo Scribante circuit, the Volkswagen team quickly established themselves as the ones to beat.

Mike Rowe, head of Volkswagen Motorsport, said: "We are thrilled with the performance of our new car and we are very proud of what the team achieved in a short space of time. Thanks to the efforts of everyone involved, from the technicians to our team drivers, the new Golf 8 GTI has now won four of the six races that it started." During the practice sessions on Friday (30 October), it became clear that the Golf 8 GTI had the pace to register a good result. The team converted their early pace into good qualifying results. The drivers, Daniel Rowe and Keagan Masters locked out the front row for Race 1, with Rowe setting a time of 1:01.450. Masters was a mere 0.003sec slower.

Rowe went on to convert his pole position into a flag to flag victory after controlling the race from the front, while Masters was forced to relinquish second place late in the race.

Race 2 saw a very similar result, but this time it was Masters who controlled it to claim his second victory of the season while Rowe ended up on the final step of the podium in third. The two Golfs started the final race of the day from second and fourth on the grid respectively. 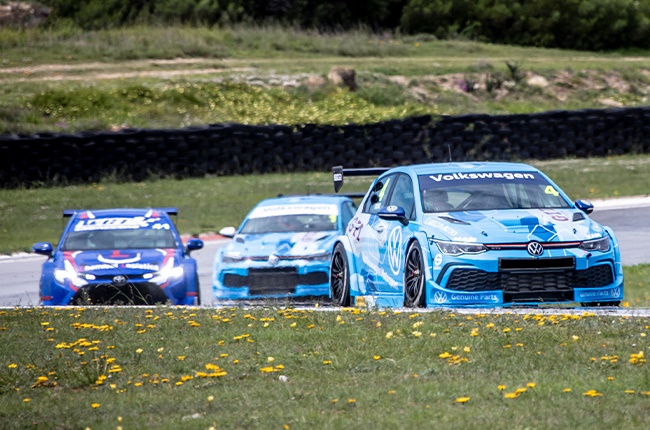 Masters and Rowe were quick off the line, but on the outside line for turn one contact between Masters and another competitor sent the Golf onto the grass and seemingly out of the race. Two turns further, more contact ensued - this time between Rowe and one of the rival competitors.

The organisers had no choice but to stop the race to allow the marshals to retrieve the stricken cars. The race resumed a few minutes later with both Golfs forced to start from the pitlane. Both Masters and Rowe were soon near the front of the field before smoke inside the cockpit of the Masters' car forced the young driver to return to the pits for the team to rectify the problem. Meanwhile, Rowe maintained his pace to record a second-place finish to complete a successful day for the team.

Daniel Rowe said shortly after the last race: "We have definitely established ourselves as the team to beat. The team did a great job with the car, and it is a privilege to be a part of the entire team effort." We live in a world where facts and fiction get blurred
In times of uncertainty you need journalism you can trust. For 14 free days, you can have access to a world of in-depth analyses, investigative journalism, top opinions and a range of features. Journalism strengthens democracy. Invest in the future today. Thereafter you will be billed R75 per month. You can cancel anytime and if you cancel within 14 days you won't be billed.
Subscribe to News24
Related Links
Volkswagen's Golf 8 GTI races to victory on its debut at opening-round of 2020 GTC Series
Early success for Toyota at GTC race - Corolla racecar opens 2020 account with a win
Next on Wheels24
WATCH | Sébastien Ogier celebrated in a new film as he returns for Rally Portugal