Despite being race car drivers for VW, they also have day jobs. There is often a misconception that well-known or famous people are serious and unapproachable and generally need a golden carpet wherever they go. Okay, maybe that is pushing the envelope, but nevertheless, they're held in high regard by the wider audience who follow them.

Have you ever heard of JD Productions? Neither have I – that is, before the 2022 Knysna Simola Hillclimb. JD Productions is the fictional name that former Volkswagen GTC drivers Daniel Rowe and Jonathan Mogotsi coined if they should ever start their own YouTube channel to document their banter.

One hilarious example came during a practice run up the hill when Daniel put 20kg worth of luggage and charging equipment in the rear of Jonathan's 100kW e-Golf, unbeknown to him. Jonathan complained that the car felt heavier going up the hill and later found out what Daniel did. No matter when and where, they are constantly chirping one another. Daniel wouldn't be far behind wherever Jonathan would be, and vice versa. Having spent a weekend with them, it's evident they are the most down-to-earth, humble, and relatable people you'll meet. They're always willing to answer any questions – whether personal or professional. Despite being factory drivers for VW, they also have regular jobs. Jonathan is a business analyst, and Daniel is a biokineticist.

Do you have a special bond/relationship with a petrolhead friend or partner? Please email us, or comment below.

Jono says he always tries to make time for the people in his life, juggling work and racing, ever since he won a racing seat with Volkswagen Motorsport in 2017. 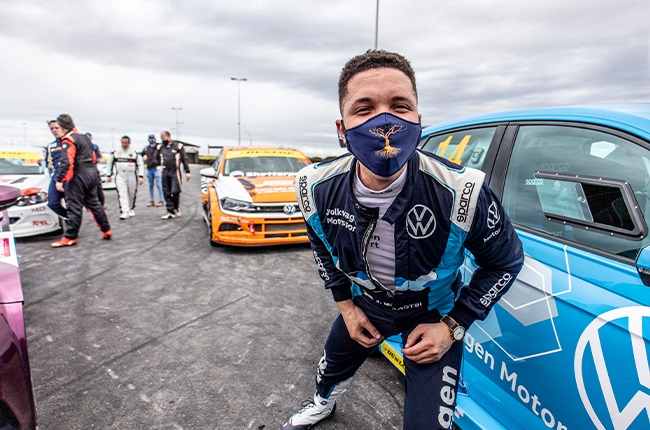 Daniel started his career by driving karts when he was younger, and the hard work and dedication over the years afforded him the current opportunity. "Sometimes I run on fumes, but there is no other feeling in the world than what racing gives you," says Rowe.

READ | Jonathan Mogotsi: How an 'extroverted introvert' went from sim racing to driving for VW SA

If I had bucketloads of money, I'd make sure JD Productions sees the light of day because just by being themselves, the content is most definitely worth it.

Sadly, after the successful Knysna Hill Climb, Volkswagen Motorsport suffered a tragic loss, losing two of their own. The fatal crash saw the Volkswagen Motorsport team transporter destroyed, and with it, both the Golf 8 GTIs driven by Mogotsi and Rowe in the first half of the 2022 CTC Championship.

Mogotsi has since then stepped back into the GTC SupaCup in Round 4 of the championship at Red Star Raceway, driving a Polo SupaCup backed by SONAX and Motul. Next weekend in Round 5, Daniel Rowe will be stepping into the second Team Perfect Circle entry in the GTC SupaCup. The opportunity came about following an injury sustained by team owner and driver Andre Bezuidenhout.

Rowe will be driving the car for the remainder of the 2022 season. This also sees him reunited with his former Volkswagen Motorsport GTC teammate and 2019 champion Keagan Masters.

We live in a world where facts and fiction get blurred
In times of uncertainty you need journalism you can trust. For 14 free days, you can have access to a world of in-depth analyses, investigative journalism, top opinions and a range of features. Journalism strengthens democracy. Invest in the future today. Thereafter you will be billed R75 per month. You can cancel anytime and if you cancel within 14 days you won't be billed.
Subscribe to News24
Next on Wheels24
Nicholas Fischer extends points lead as Class B dominates Phakisa BMW races