• Lee Thompson scored his and BMW's win first since the penultimate round of the 2019 season.

• Robert Wolk and Brad Liebenberg continue to be the front-runners in their divisions.

• The next race takes place at Red Star Raceway in Delmas on September 24-25.

Robert Wolk and Brad Liebenberg consolidated their positions at the top of the respective GTC Championship and GTC SupaCup points tables, while Round 4 at the East London Grand Prix Circuit saw the race wins split between four different drivers this past weekend (August 27-28).

The weekend also saw a maiden victory for Lee Thompson and BMW's win first since the penultimate round of the 2019 season. Samuel Hammond and Nicky Dicks also made their GTC SupaCup debut. Van Rooyen continued to exhibit his pace in Race 1 with a lights-to-flag win while setting the fastest lap. This saw him gradually pulling away from Wolk and Temple, who challenged each other for the final two podium positions. During the early stages, Thompson held off a host of challenges by Van der Watt, but the latter was able to gain the position when Thompson retired with a mechanical issue. Mdakane, who struggled with electrical issues, finished two laps down on the leaders in fifth place. Thompson did complete nine laps, which saw him classified in sixth place.

The result-classification saw Thompson starting from pole position in the reverse-grid second race. He was hounded by Wolk and Van Rooyen in the opening laps, but with the latter two engaging in their cat-and-mouse battle, Thompson was able to build a margin of comfort at the front to take his maiden victory. Van Rooyen completed the podium behind runner-up Wolk and again set the fastest lap in the process. Further back, Temple and Mdakane finished in fourth and fifth places, respectively. Van der Watt retired after six laps after sustaining damage on Lap 1 following an incident that also involved Van Rooyen. 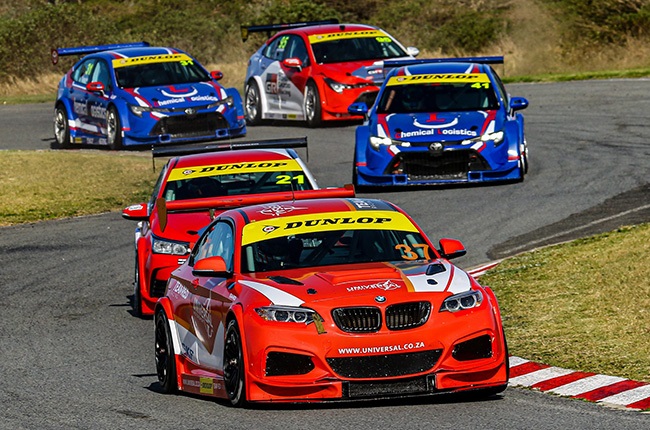 Following the conclusion of the race, Van Rooyen was issued with a penalty for his part in the incident, which saw him demoted to fifth place. This resulted in Temple being promoted to the podium and Mdakane to fourth place. Jason Campos made the most of his pole position to hold off Liebenberg in a fiercely contested battle for the lead. This saw Campos taking his second GTC SupaCup victory, his first from the standard grid. Further back, Kruger, Mogotsi and Variawa were involved in another closely contested battle for the final podium position. Variawa dropped back while Kruger momentarily held onto the position, but soon Mogotsi made his way past again. Mogotsi collected the final podium place with Kruger in close pursuit. Joubert, who missed Round 3 due to mechanical problems, bounced back with his best result of fifth place in his debut season ahead of Davidson and Variawa. Hammond beat Bezuidenhout to eighth place while Dicks picked up the final point. Campos finished in 11th place following contact between himself and Pitamber, the latter retiring with front-end damage after two laps. De Bruyn retired at the end of Lap 4 with stub-axle damage following contact between himself and Dicks at the end of Lap 3.

It did not take long for Liebenberg to make it to the front of the reverse-grid race, but he had to work hard to keep his closest rival Mogotsi behind him. Liebenberg, however, secured his fourth race win of the season while setting the fastest lap. The podium was completed by Kruger, with Variawa finishing in fourth place. Joubert equalled his best result, this time with a much bigger margin of comfort over Davidson. With his Race 1 damage repaired, Du Bruyn held off Bezuidenhout for seventh place. Pitamber and Dicks completed the list of finishers, a lap behind the leaders. Both Jason and Rui Campos were eliminated in an opening lap incident, while Hammond was forced to retire after four laps.

Round 5 of the 2021 GTC Championship and GTC SupaCup will take place at Red Star Raceway in Delmas on September 24-25.