• The fourth round of the 2021 GTC Championship will take place at the Border Motorsport East London Grand Prix Circuit on July 2-3.

Robert Wolk surpassed Michael van Rooyen on the GTC Championship points table while Jonathan Mogotsi celebrated his maiden GTC SupaCup win this past weekend (May 28-29) at Aldo Scribante Racetrack in Gqeberha, on the Volkswagen Race Day. Van der Watt passed Thompson early on the opening lap while Wolk retained his lead through the first series of corners. Following a cat-and-mouse battle at the front for the remainder of the 10-lap race, it was Wolk who took his first win for 2021 after a lights-to-flag lead and also set the fastest lap in the process. Van der Watt finished as runner-up, with Thompson taking his second podium finish for the year in third place. Temple gained a position with Van Rooyen and Mdakane, completing the field.

This saw the Toyota Gazoo Racing South Africa team heading up the grid for the afternoon's second reverse-grid 30 Minute Plus One Lap race. Van Rooyen rapidly made his way past Mdakane while Wolk had to work a bit harder to move into second place in the running order. With the points leaders extending a gap at the front, Mdakane held off Thompson, Temple and Van der Watt. But a third of the way into the race, there was contact between Mdakane and Temple. Despite damage to their cars, both drivers continued, although Temple was forced to pit for repairs to be conducted.

Van der Watt also sustained damage in an incident and retired after 11 laps. Wolk caught up with Van Rooyen in the closing stages but was unable to challenge for the lead, with the latter going on to take his third win of the season. Van Rooyen also set the fastest lap of the race. Wolk closely pursued him to the finish line. Thompson made it two third-place finishes for the day. Despite being 11 laps down on the winner, Temple completed the full race distance in fourth place. Mdakane retired with just under five minutes remaining. A late addition to the entry list was Rui Campos (Turn 1 Insurance Campos Racing), who qualified in eighth place, making his return to the series for the first time since substituting for Jason at the same circuit in the penultimate round of the 2020 season. Andre Bezuidenhout (Motul Team Perfect Circle and Shaun Duminy (SMD Exotics) completed the top-ten. Johan de Bruyn (OdorCure) qualified in 11th place ahead of Manogh Maharaj (SMD Exotics). Despite participating in Friday's practice sessions, a terminal error on Dawie Joubert's (Wild Rose Gin) Volkswagen SupaPolo forced him to miss the session, whereafter he was also unable to compete in any of the day's races.

The battle between Liebenberg and Mogotsi continued into Race 1. Liebenberg took a lights-to-flag win ahead of Mogotsi, who set the new lap record at the circuit. Variawa completed the podium ahead of Kruger with Jason Campos in close pursuit of the pair. Rui Campos held off Pitamber and Davidson for sixth place. Bezuidenhout finished in ninth-place, with Maharaj completing the top-ten. Duminy took 11th place ahead of De Bruyn.

The reverse-grid second race saw Jason Campos taking the early lead with Mogotsi and Variawa in close pursuit. Six laps into the race, there was contact between Pitamber and Liebenberg. This resulted in Liebenberg's retirement, also marking the first race in the series that did not see him take a podium finish. The battle at the front of the field continued, but it was Mogotsi who passed Campos for the lead in the last third of the race. Volkswagen Motorsport South Africa's Mogotsi took his maiden victory in the series at the home of Volkswagen South Africa, with Aldo Scribante Racetrack also being the circuit where he took his first national victory four years prior. 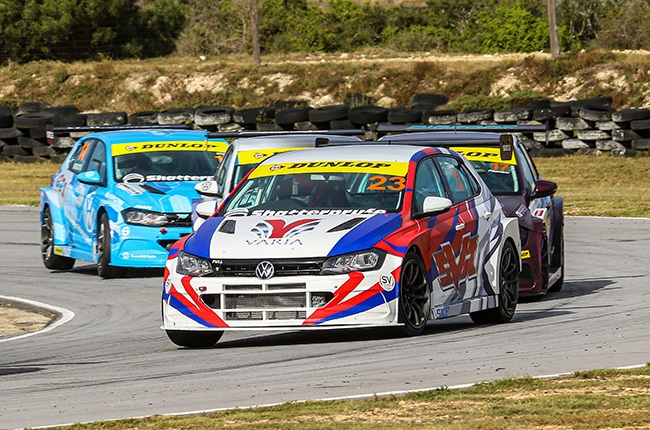 Mogotsi also set the fastest lap of the race. Campos finished as runner-up with Variawa making it two podium finishes for the day in third place. Pitamber finished in fourth place on-track but was handed a three-place penalty for his part in the incident between himself and Liebenberg. This resulted in Rui Campos taking his best finish in the series of fourth place, with Bezuidenhout and De Bruyn completing the top-six.

The fourth round of the 2021 GTC Championship will take place at the Border Motorsport East London Grand Prix Circuit on 2-3 July. We live in a world where facts and fiction get blurred
In times of uncertainty you need journalism you can trust. For only R75 per month, you have access to a world of in-depth analyses, investigative journalism, top opinions and a range of features. Journalism strengthens democracy. Invest in the future today.
Subscribe to News24
Next on Wheels24
Follow the Raptor: Ford's fastest bakkie to be the official route vehicle for SACCS