• The Kia Seltos CRDI recently undertook a journey from Johannesburg to Cape Town.

• The goal: See how much distance can be covered before the fuel tank runs dry.

• The Seltos covered more than 1100km on a single tank of diesel.

Adventurer and presenter of the local television show, Wild in SA, Tumelo Maketekete, recently journeyed from Johannesburg to Cape Town in the diesel-powered Kia Seltos. Dubbed the 'Epic Economy Drive', Maketekete drove the Seltos as he would have done under normal circumstances. This was not your average economy drive, and the presenter took on the 'Joe Soap' challenge by sticking to the speed limit, overtake as per usual, and having the air conditioning on full blast.

Maketekete filled the Seltos' tank up in Johannesburg and set about the journey to Cape Town. The goal: To see how much distance he could cover before the tank is empty. 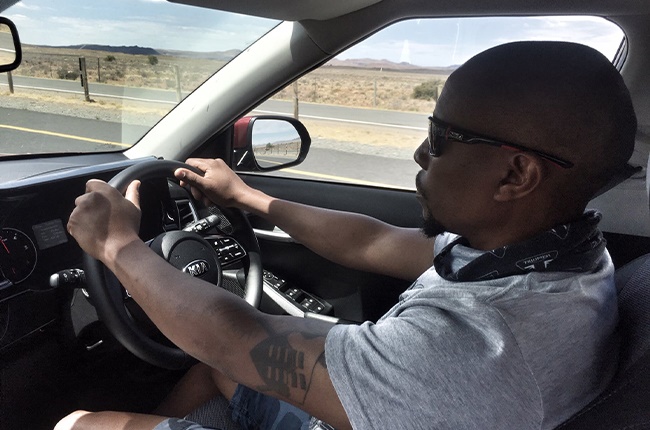 For the Epic Economy Drive, Tumelo was in a Seltos 1.5 CRDI EX, which is the entry-level version with a six-speed manual gearbox. The 1.5-litre diesel engine delivers 86kW and 250Nm of torque.

Maketekete adds: "Once in the Karoo, our quest for minimal fuel use was put to the test. Not only was it boiling hot, but we were battered by some proper crosswinds and headwinds for quite a while. Which is exactly why we love doing local tests such as these because we can give our audience a much more realistic view of how cars perform on South African roads."

At around 1078km into the trip, the Seltos CRDI showed it had a range of about 60km to go. Luckily, the team was only about 30km from Laingsburg, so they weren't too worried about running out of fuel in the middle of nowhere.

In the end, and to avoid damaging the engine, Maketekete reached Laingsburg just short of running the tank dry. Following the final calculations, the results were astounding: the Kia Seltos CRDI achieved a fantastic 4.37-litres/100km. This is a brilliant result, especially considering that no special 'fuel-saving' measures were used - it was just a normal drive.

And if you were wondering, it would be another 262km to Cape Town International Airport from Laingsburg. Almost, Tumelo, almost.

We live in a world where facts and fiction get blurred
In times of uncertainty you need journalism you can trust. For 14 free days, you can have access to a world of in-depth analyses, investigative journalism, top opinions and a range of features. Journalism strengthens democracy. Invest in the future today. Thereafter you will be billed R75 per month. You can cancel anytime and if you cancel within 14 days you won't be billed.
Subscribe to News24
Related Links
RoadTrip | Overberg ramble in Kia's Seltos SUV, understanding ceramics and canola oil
REVIEW | Why the Kia Seltos SUV stands out in the crowd
Eight-month-old Kia Seltos now gains diesel sibling to expand growing success in SA
Next on Life
These are all the cars Toyota is bringing to SA in 2023, and its new Urban Cruiser is a stunner!