Following hot on the heels of the launch of its new NX mid-size luxury SUV, Lexus has lifted the lid on its all-new big-boy SUV, the LX. Since 1996, the large Lexus LX has been winning the hearts of customers around the world. More than 500 000 LX vehicles have found homes in more than 50 countries, and in South Africa the model is one of the most popular vehicles in the Lexus portfolio despite its retina-searing price tag.

Lexus South Africa says it will disclose exact local specifications and pricing closer to the time of the South African introduction in the first quarter of 2022. However, as revealed at last night's function, the vehicle comes with two engine choices and a raft of gizmos and gadgets that will, arguably, please even the most discerning customers. The new Lexus LX can be equipped with either a 3.5-litre V6 twin-turbo petrol engine or a 3.3-litre V6 diesel twin-turbo engine. No South African performance figures have been released yet but we expect them to fall in line with Toyota Land Cruiser 300 outputs.

An electronically controlled braking system (ECB) and an electric power steering system (EPS) is used in the new model to ensure customers can enjoy a safe and comfortable ride, regardless of whether you are on- or off-road.

Lexus says that its latest engineering innovations and the adoption of two new available powertrains will also contribute to improved environmental performance, reducing annual carbon dioxide emissions when the vehicle is in use by approximately 20 per cent on a global cumulative basis compared to the previous model. In harsh off-road environments, to promote a safer and more comfortable driving experience, the instrument panel features Lexus' first dual display with a 12.3-inch upper screen and 7-inch lower screen, as well as Back Underfloor View, which displays the area beneath the rear part of the vehicle as a world first.

"The new LX is more personalised, and the newly added VIP grade is specially designed with four independent seats for elegant and safe travel on all kinds of roads. The F SPORT grade allows customers to enjoy sporty driving on winding roads," according to the manufacturer.

Exact local models and the engine line-up will be revealed early next year. 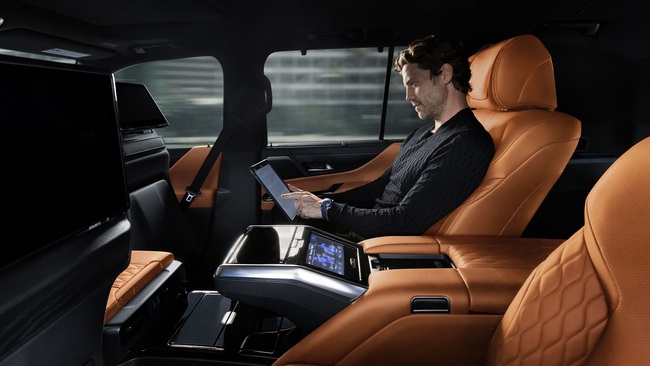 We live in a world where facts and fiction get blurred
In times of uncertainty you need journalism you can trust. For only R75 per month, you have access to a world of in-depth analyses, investigative journalism, top opinions and a range of features. Journalism strengthens democracy. Invest in the future today.
Subscribe to News24
Next on Wheels24
Toyota taxis offer even greater safety features: meet the updated Hiace Ses'Fikile

Subscribe to newsletters
Lockdown For
DAYS
HRS
MINS
Brought to you by
Voting Booth
Who do you feel was at fault for Verstappen and Hamilton's Italian GP crash?
Please select an option Oops! Something went wrong, please try again later.
Verstappen
25% - 1426 votes
Hamilton
43% - 2426 votes
They were both at fault
32% - 1791 votes
Previous Results
Car Doctor
Why covering your licence plate in online photos could protect you, and your car