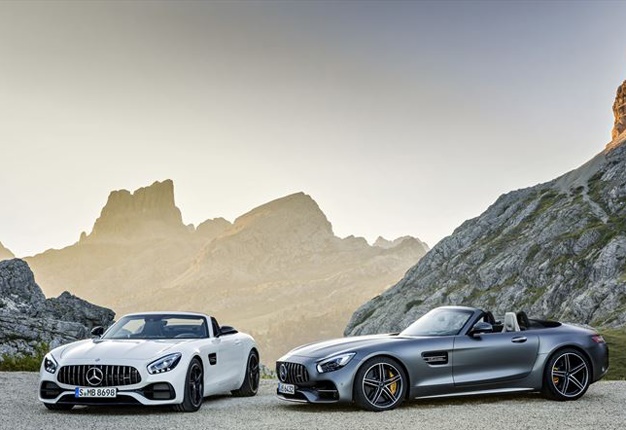 Johannesburg - It's not every day you get to drive a new beastly AMG, nor is it everyday you get to play around with these performance cars at a world-class racetrack such as Kyalami in Midrand.

In celebration of 50 years of Mercedes-AMG, the automaker will treat fans of its performance division to three new members of its AMG GT family; the AMG GT Roadster and AMG GT C Roadster, as well as the the beast of the Green Hell, the AMG GT.

Govender also added that there is already a strong demand for the GLC 45 and 43 models and that the automaker will launch its AMG S 63 and 65 locally in January 2018.

Clint Weston, AMG Driving Academy instructor and racedriver, reckons the GT R is the "best supercar" he has driven yet. I have to say that he might just be right. Although the Hulk (green GTR) had few km's on its clock, the more I drove it on track, the more it warmed up and allowed its inner beast to unleashed on track. It's a monstrous machine at home performing hot laps.

While it's immensely powerful, it's unbelievably easy to drive around the track, and has the ability to push even a rookie driver's confidence behind the wheel. It's extremely comfortable behind the wheel despite its sports-tuned suspension and that's that's the sheer beauty of the AMG GT R.

Mercedes-Benz said: "The front-mid-engine concept with transaxle, the V8 biturbo engine rated at 430kW/700Nm, the extensively modified suspension, the new aerodynamics and the intelligent lightweight construction lay the foundations for the exceptional driving dynamics."

The AMG GT Roadster houses a 4.0-litre V8 biturbo unit and delivers 350kW/630Nm. Boasting an even more striking and dynamic appearance, the AMG GT C Roadster with its output of 410kW/680Nm is a new model variant that slots in between the AMG GT S and AMG GT R.

This is where "luxury meets performance", says MBSA, thanks to its wider track, finest components and nappa leather inside the vehicle. It's also incredibly fast off the line, and during the short drag races, it proved fastest almost every time.

Prices at a glance

SA racer @ClintWeston1 tells us a bit about the @MercedesBenz_SA GT R. He reckons it's the best supercar ever! @MercedesAMG pic.twitter.com/CZE90ecoEm

The AMG GT C Roadster employs some of the sophisticated technical features of the AMG GT R, including the active rear axle steering and the electronically controlled rear axle limited-slip differential. And from the Panamericana Grille through to the broader tail end, its AMG GT R genes are plain to see.

The GT C Roadster is fitted with a nappa leather interior and the AMG performance steering wheel in nappa leather/Dinamica microfibre.

For the first time, the AMG performance seats are also optionally available with AirScarf neck-level heating and seat ventilation - for undiluted open-air driving pleasure especially on brisk winter days. The soft top opens and closes in approx. eleven seconds on both AMG GT Roadster variants, even when on the move at speeds up to 60km/h.

To mark its founding back in 1967, and now celebrating its 50th anniversary, the new AMG GT C Roadster is available as an exclusive special Edition 50 model.

The exterior's distinctive look is defined by black chrome highlights applied to the side skirt trim, the front splitter, the trim strips in the air inlets of the Panamericana grille, the fins on the side air outlets in the front wings, the moulding on the rear diffuser and the exhaust tailpipe trims. The surface of the cross-spoke AMG forged wheels has been harmonised with the black chrome elements of the exterior.

However, MBSA says there are only 4 of these exclusive cars in South Africa, of 500 worldwide. And, one unit has already been sold.

The interior features a contrast black and silver colour scheme followed not only by the trim in Style exclusive nappa leather in silver pearl/black with grey diamond-patterned contrasting topstitching, but also by the black AMG Performance steering wheel in Dinamica microfibre with grey contrasting topstitching. There's also "Edition" lettering on the steering wheel bezel and 12 o'clock mark in silver pearl.

The Edition 50 comes standard with the AMG Interior Night package, which includes steering wheel spokes, shift paddles and doorsill panels in black. There are silver seat belts and black chrome trim while the head restraints of the AMG Performance seat is embossed with "GT Edition 50".

We live in a world where facts and fiction get blurred
In times of uncertainty you need journalism you can trust. For only R75 per month, you have access to a world of in-depth analyses, investigative journalism, top opinions and a range of features. Journalism strengthens democracy. Invest in the future today.
Subscribe to News24
Related Links
GALLERY: Mercedes-AMG GT family
Can you do the #AMGgrowl? Watch SA's Riaan Cruywagen, traffic cop react
Next on Wheels24
WATCH | Meet the 563kW 765LT Spider - McLaren's most powerful convertible yet