• Two models comprise the range, both powered by the same V8 engine.

• Local arrival is yet to be confirmed.

Mercedes-Benz revealed the latest chapter of its SL sports car. The new car is the culmination of 70 years of expertise and engineering excellence that began in 1952 with the 300 SL. Now, in its latest guise, the SL will be produced exclusively under the automaker's performance arm, AMG. In addition, the soft-top roadster will be available as a 2+2 sports car.

The SL also does away with the previous model's metal roof, this time opting for an electric soft top. According to Mercedes-AMG, this roof has a weight saving of 21kg, which creates a lower centre of gravity. The roof closes in a Z formation, and operation is completed in 15 seconds up to speeds of 60km/h.

Gorden Wagener, Chief Design Officer Daimler Group, says: "With the new SL, we have created a repositioning of the iconic SL design. The expressively modelled exterior conveys a light and purist impression and brings sensual beauty and extravagant design into perfect harmony." 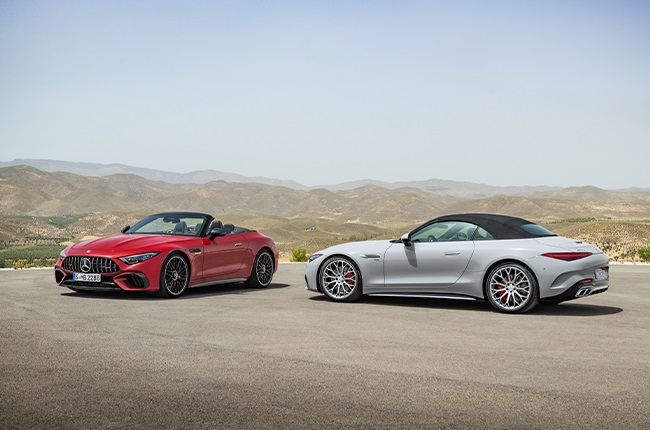 Merc's famous 55 nomenclature returns to identify the SL 55 4Matic+. Implementing the same engine, power has been dialled back to 350kW and 700Nm. The power deficit has very little impact on performance, as the 100/h sprint takes only 3.9 seconds. The top speed is rated at 295km/h. Both models send their power to all four wheels via the automaker's nine-speed automatic transmission.

Mercedes-AMG confirmed that a hybrid model would join the line-up at a later stage. It will form part of the AMG E Performance drive strategy. Mercedes-AMG also announced that the new SL will have a total of six driving modes, these being Slippery, Comfort, Sport, Sport+, Individual, and RACE. The latter mode is standard on the SL 63 4Matic+, but it is included in the optional AMG DYNAMIC PLUS package available to the SL 55 4Matic+.

Mercedes-Benz South Africa is yet to announce when the new car will make its local debut.