Bike or car? Conquering the Karoo on Suzuki's two wheels or four without breaking the bank • Suzuki is one of the few automakers selling both cars and bikes in South Africa.

• The automaker recently showcased its Ignis and V-Strom through a trip to the Karoo.

• Nicol Louw says there are interesting similarities between the two steeds.

What better way to beat the Covid blues than a trip to the breathtaking Karoo?

Wide-open spaces, silence and, best of all, poor cellphone reception. This was precisely what the team at Suzuki was thinking when planning this adventure but with a difference: the opportunity to ride and drive, which is a first.

As the OEM sells both vehicles and motorcycles, it allowed us to sample both the Ignis B-segment SUV and the V-Strom 1050 XT adventure motorcycle on tar and dirt. Why the Ignis and the V-Strom?

The V-Strom is Suzuki's answer to the rapid-growing adventure motorcycling market and a natural choice for covering extended tar sections at speed before slowing down for technical riding through the Swartberg. Not so in the case of the city slicker Ignis. It has a plucky character but would it cope?

There are interesting similarities between the two steeds, though. They both have a striking design; engine size differs by a few cubic centimetres, and both costs almost the same while sitting at the affordable side of their individual segments.

The three-day trip started in Grabouw, joining the flowing N2 up to the turn-off to the majestic Tradouw pass to Barrydale. Heading to the Karoo on the R62, the real adventure started when the group left the tar for Seweweekspoort. The rest of the trip was a combination of tar and dirt with highlights including the Swartberg pass, visiting the small town of Klaarstroom and heading to George on the old Montaque pass. 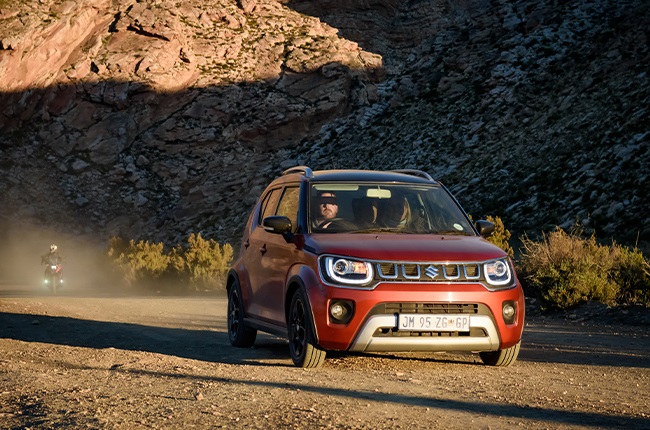 The Ignis was well received at launch, offering a raised ride height (180mm) compared to the popular Swift, with which its shares its 1.2-litre powertrain. It is probably too small for a family weekend away owing to the tiny boot, but it's perfect for couples. With the more powerful bikes streaking off into the distance on the open tar sections, the Ignis had its work cut out to keep up. The steepest gradients required a downshift to keep to the national speed limit. Indicated fuel consumption hovered in the 5.8-litres/100 km region - very impressive.

More surprising was its off-road manners. The good ground clearance and soft suspension set-up made light work of the gravel roads. The drop-down to Bosch Luys Kloof proved a serious challenge as the rainstorm of a week prior washed away part of the track. Loose rocks littered the road, and many pukka 4x4 owners would have selected four-wheel drive.

The Ignis prove up to the task with minimum fuss and even proceeded to climb the same road the following day. It is amazing to see how far a light 4x2 vehicle can go with a skilled driver behind the wheel. The technology race has hit the open-class adventure motorcycle segment with manufacturers (read BMW with the GS and Honda's Africa Twin) introducing touch screens and a myriad of options controlling power delivery, ABS, electronic stability control, wheelie control and dynamic suspension settings. All good to the tech junkie but not for someone who just wants to swing a leg over and go for a ride. This is where the V-Strom hits the mark. It has all the technology (sans dynamic suspension settings) working in the background, which can easily be toggled when needed. For the most part, just hop on, point the nose to the horizon and open the throttle. The Suzuki ate the open road at speed and even managed to carve up a mountain pass like Tradouw. Fuel consumption was slightly worse than the Ignis at around 6.6-litres/100 km, but this was primarily due to over-active right wrists.

Not being a dirt-road expert, I was slightly nervous about riding a 247kg Adventure motorcycle over technical sections. At least the seat height is low, allowing both feet of average riders to touch the floor, the bike narrow, allowing it to feel more compact, and a tractable engine able to deliver fluid (rather than explosive) torque when needed.

As my confidence grew, I trusted the V-Storm to find grip with its road-biased tyres while admiring the spectacular vistas of Swartberg pass. There is no better way to see, smell and experience nature than on a bike. Not everyone can make a choice given family commitments or the possession of a motorcycle license, but which mode of transport would I recommend? The Ignis is the safe, conservative choice; able to shuttle you to most of the wonders the Karoo can offer. It is, however, more about the end destination than the journey.

The opposite is true about the V-Strom - it is all about the journey. Each section of the road is a challenge in its own way with its own rewards. Traversing a tricky dirt mountain pass instils a feeling of achievement in the rider that adds to the enjoyment. Many people are putting off an adventure like this because they are still saving for that 4x4 double cab or SUV. Suzuki proved on the Karoo adventure that spectacular scenery and experiences are within reach of mere mortals willing to brave the roads in their budget orientated transport. These two Suzuki's will get you there in style - we have the pictures to prove it.