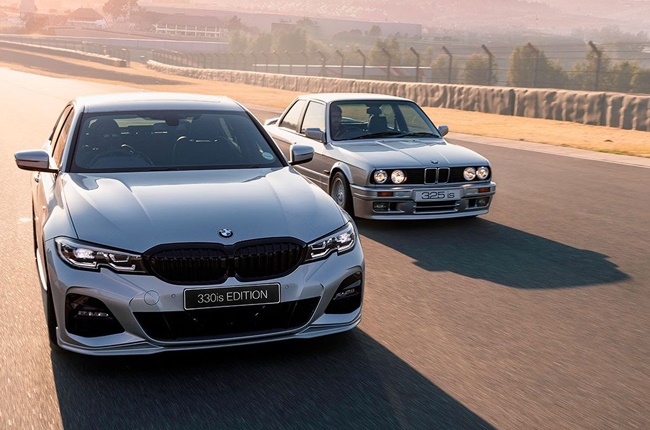 • The BMW "Gusheshe" is one of the most iconic South African cars.

•  BMW has been building cars at its Rosslyn facility since the 1970s.

• This new 3 Series variant is called the 330is Edition.

BMW has as inarguable South African heritage and a dedicated local following.

The German automaker has been building cars at its Rosslyn facility since the 1970s. Its Tshwane production asset now accounts for a significant margin of South Africa's automotive exports, with the third-generation X3.

True to its brand values of prioritising the driving experience, BMW South Africa has also produced some incredibly limited edition vehicles for the local market - all of which have become very collectable.

Cars such as the 530 MLE, original 745i, 333i, and especially the 325is, have rightfully passed into legend. Keen to preserve that brand history, BMW embarked upon a factory restoration initiative over the last few years, adding both a 530 MLE and 325is in its South African heritage collection.

The marketing department at BMW South Africa is not merely content with some period Mzansi cars in pristine condition. It has now launched a new derivative to bolster the local 3 Series range.

This new 3 Series variant is called the 330is Edition and, in theory, BMW claims it to be a homage to the company's original Gusheshe: its E30 325is.

What do you think of BMW's new 330is Edition? Have you owned a Gusheshe or Trip3 you'd like to tell us about? Please email us here. A modern 3 Series that respects its history

Any sequel is burdened with expectation. The 330is Edition is a bold attempt at leveraging BMW's South African brand heritage to assist with sales momentum in a compact luxury sedan market, that is stalling under the pressure of similarly priced SUVs and crossovers.

What you get for your R899 000 is a 330i with an M Sport kit. BMW's signature kidney grille is finished in high-gloss black, while the 330is Edition's headlights feature a black outline.

Framing the front bumper is a splitter, which adds a bit more downforce to the front axle at speed. There are body colour side skirts too and a subtle boot spoiler, which balances the slight improvement in overall downforce. Distinguishing each of the 230 BMW 330is Edition cars BMW is planning to market, will be a bootlid badge.

Inside this new addition to the local 3 Series, there are "Edition" treadplates as you open the door and 330is badges. Cabin equipment upgrades from a conventional 330i include an M leather-trimmed steering wheel, ergonomically-shaped sports seats, a manual sunroof and Harman Kardon surround system.

Much quicker than the original 'Gusheshe'

The 325is was only available with a five-speed manual transmission, whilst the 330is Edition uses ZF's excellent eight-speed automatic. In terms of relative acceleration, there is no content.

On a high-friction surface, the 325is will run a 0-100kph time of 7.5 seconds, which was outstanding in its heyday but trails the 330is Edition by quite a margin. With its vastly more powerful engine and swift shifting automatic transmission, the 330is will comfortably outrun a 325is from 0-100km/h, in only 5.8 seconds.

For BMW purists, the original car's manual transmission, two-door configuration and a kerb weight nearly 300kg lighter will always make it the superior driver's car. But if you can't find a mint condition Gusheshe, and desire something a touch more distinctive from BMW's current 3 Series offering, this 330is Edition might be a fair theoretical compromise.

We live in a world where facts and fiction get blurred
In times of uncertainty you need journalism you can trust. For 14 free days, you can have access to a world of in-depth analyses, investigative journalism, top opinions and a range of features. Journalism strengthens democracy. Invest in the future today. Thereafter you will be billed R75 per month. You can cancel anytime and if you cancel within 14 days you won't be billed.
Subscribe to News24
Related Links
SEE | Superboss, Gusheshe, 323 200i...Three classics that were unique to the South African market
WATCH | Unseen footage of SA's ultra-rare BMW 333i and 325iS legends
Next on Wheels24
WATCH | New Range Rover Sport Autobiography bigger and bolder than before. We drive the R2.2m SUV