Split, Croatia - Mercedes-Benz has launched its all-new A-Class to international media representatives during the closing stages of April 2018 and has dubbed the small city car as one of the most advanced cars it ever set in production.

This is because the A-Class has set the bar slightly higher in terms of technological advancements and can even compete with the mighty S-Class in terms of the skillset at hand.

The beautiful city of Split in Croatia played host to the launch and the countryside allowed for the vehicle to be sampled to great effect. The car is still instantly recognisable as an A-Class, but its design is cleaner and more fluent than before.

On the engine front Mercedes-Benz South Africa cannot yet confirm which derivatives will be coming to our market, but a few powertrain options were available to drive. Comprising two petrol motors and one diesel, the range promises to build on the success of the outgoing generation. 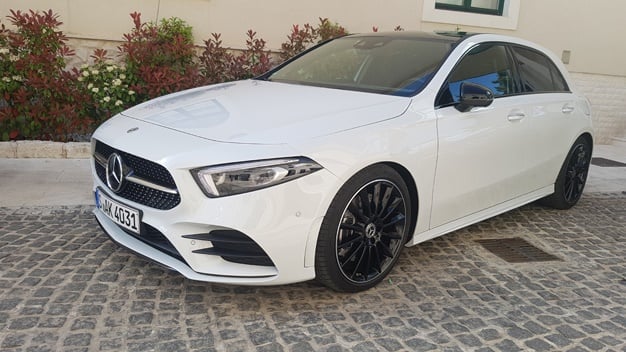 As mentioned, the new A-Class is powered by a series of turbocharged four-cylinder engines, all of which are either new of revised. Kicking off the range is a new 1.33-litre petrol engine that produces 120kW and 250Nm; replacing the old 1.6-litre unit. This engine can be mated with either a six-speed manual gearbox or a seven-speed dual-clutch automatic transmission.

Next is a 2.0-litre engine in the A250 delivering 165kW and 350Nm, mated with only the automatic transmission. And lastly is the 1.5-litre diesel engine in the A180 d that churns out 85kW and 260Nm. This engine is shared with numerous Renault products, but Merc claims to have altered some of the internals for application in the A-Class. It is also mated with only the automatic gearbox.

The chassis on the two aforementioned models do offer good stability on the road and does well to dish up a very compliant ride. Both vehicles have a slight hesitation to initial steering input, but almost instantly reacts with an assured feel. Lane Keep Assist is very aggressive, though, and will brake with menace when detecting that you’re veering out of your lance. And the steering reacts in accordance to bring you back.

The A200’s engine has a liveliness to it, but it never feels as if the small displacement unit has to work hard. Though Merc claims that this car has a fuel economy of 5.2 litres/100km (5.8 for the manual), one can’t help but wonder how both performance and economy will be influenced when the engine is put under strain because of luggage and five adults.

The diesel engine, on the other hand, is perhaps the model to go for. The torque is available from as low as 1800rpm and is there always a good amount of punch available in any gear at any given moment. The clutter associated with diesel engines at idle and whilst on the move is virtually non-existent in this car, but the real question is whether Mercedes will bring this engine to SA - because of the poorer quality of our diesel. If this engine, in this state of tune, does make its way SA then great. If not, expect it in a detuned state (i.e. Renault Duster: 80kW/250Nm). Regardless, Merc claims a fuel consumption of 4.1 litres/100km for this engine.

Highlights across the range include drag figure of only 0.25cd and a cabin that is 30% (3db) more quiet than the outgoing model.

Those familiar with the A-Class will immediately notice the interior differences between the new and outgoing car. Featuring a cleaner and fuss-free layout, the cabin is inviting and creates a sense of space. Most of the controls have been incorporated into the steering wheel and can all settings be displayed on the screens in front of the driver. These screens have been adapted from the Mercedes-Benz S-Class, but the one in the centre of the dashboard allows for touch technology.

Another feature Merc installed in the A-class is its MBUX; a voice-control operating system that allows for commands to be given to the car and the car executing it. Using the keywords “Hey Mercedes”, the car will respond duly and perform the task that’s been asked of it.

Mercedes-Benz admits that the system is not fool-proof and that there are issues that will be sorted out as updates come along, but the system comprehends the basic of commands and tasks. Adjusting the media system’s volume or blow-strength of the air con, or opening/closing the sunroof, the MBUX can do it.

The system is country/dialect sensitive, which made it a tad difficult to understand a user with a very strong Afrikaans accent. But it recognises commands in 23 languages; including English. It is also compatible with Google Home and Amazon’s Alexa.

Furthermore, owners can share their vehicle with others if s/he so wishes thanks to a digital key that can be shared and stored on one’s smartphone. This key is only available for the time period the owner allows for their car to be shared. It also features semi-autonomous driving that allows the car to steer itself, as well as move over to the other lane when it is safe to do so. All without driver input. However, the driver still needs to keep a keen eye on proceedings and not give full control over to the vehicle.

The all-new A-Class is undoubtedly a game changer for the German automaker and will surely ruffle the feathers of its competitors. In terms of styling Mercedes has done a very good job in making the car look the part, but it’s with the interior and technology that it moved the goal posts.

Given that the A-Class is aimed at a younger buyer as opposed to the C- and E-Class buyer, the technology featured will put it at the top, or near the top, of most buyers shopping list in this segment. Unfortunately, there were no models on offer with only the bear minimum of features, because it will be interesting to see how the smallest Merc presents itself without all the bells and whistles.

The new A-Class will be launched in South Africa during the third quarter of 2018. Pricing and model line-up will be confirmed closer to the time.

We live in a world where facts and fiction get blurred
In times of uncertainty you need journalism you can trust. For only R75 per month, you have access to a world of in-depth analyses, investigative journalism, top opinions and a range of features. Journalism strengthens democracy. Invest in the future today.
Subscribe to News24
Related Links
New Mercedes-Benz A-Class breaks cover
Next on Wheels24
Gordon Murray's T50S Niki Lauda track-only hypercar doesn't focus on top speed figures