• Only 30 units came to the country, 12 of which are fitted with a manual gearbox.

The arrival of the BMW M2 CS heralds the M divisions first foray into the premium compact segment with its prestigious and overly sporty special edition model. The M2 CS builds on the success of previous models such as the M3 CS and M4 CS and serves as the basis for the M2 CS racing car, BMW Motorsport's new entry point to amateur racing and the Clubsport segment.

The BMW M2 CS has an even sharper look about it than the BMW M2 Competition and blends outstanding track performance with everyday usability. With high levels of acceleration, handling dynamics, precision and agility, it is a great choice for fans of high calibre performance cars and the perfect gateway into the world of BMW M high-performance cars. An array of carbon fibre-reinforced plastic (CFRP) components, including the bonnet, gives the M2 CS an extremely sporty appearance. The roof is made entirely of carbon fibre as is the front splitter, Gurney spoiler lip on the boot lid, rear diffuser and mirror caps.

The M2 CS has all the traits of an iconic drivers car; a powerful high revving engine, rear-wheel drive and a manual gearbox.

Driving feel, handling stability, steering precision and controllability at the limit make the M2 CS an authentic sports car. It probably is the last true M car in an era where cars are getting bigger, heavier and mostly fitted with X-Drive all-wheel drive. Rumours suggest that the M2 CS will be the last BMW M car fitted with a manual gearbox. The twin-turbocharged six-cylinder in-line engine has an extraordinary appetite for revs for a turbocharged engine, plus linear power build-up over a wide rpm band. The straight-six boasts 331kW at 6250rpm, which is 29kW more than the M2 Competition, and 550Nm between 2350 - 5500rpm. It enables the M2 CS to sprint from standstill to 100km/h in just 4.0 seconds when equipped with the M DCT transmission or 4.2 seconds when fitted with the six-speed manual gearbox. The addition of the M Driver's package means that the M2 CS will keep accelerating to 280km/h.

A baffled sump, as well as extra oil, scavenge pump, and a sophisticated oil return system near the turbocharger keep the oil circuit functioning smoothly under extreme acceleration and braking.

The track-tested cooling system comprises a central radiator plus two radiators at the sides, along with additional oil cooler behind the racy bodywork, which has been designed with maximum airflow in mind.

The exhaust system has a dual-branch design and concludes in a familiar quartet of tailpipes offering aural an aesthetic appeal. Two electrically-controlled flaps ensure that the M2 CS emits a sound worthy of a BMW M car. 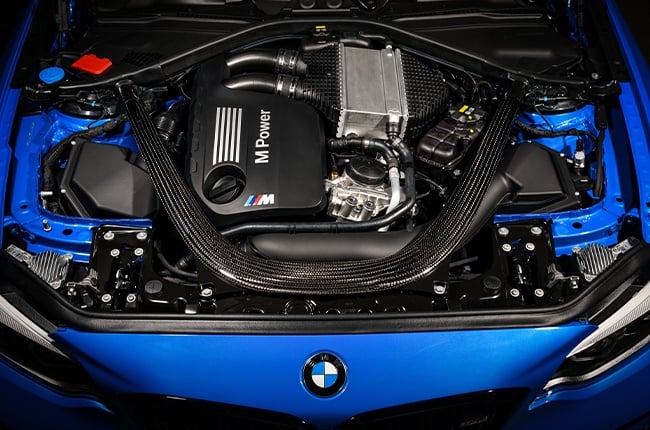 The BMW M2 CS is fitted as standard with a six-speed manual gearbox, catering to the often expressed penchant of the M2's target clientele for a good stick shift. But asking for a manual and buying one in this day and age are two different things. Fortunately, customers can also specify a seven-speed M double-clutch transmission.

Both gearbox options feature the Drivelogic function, which gives the driver a choice of three preconfigured settings, Efficient, Sport and Sport Plus. With the auto, these alter shift timing, shift speed and the automatic blip of the throttle on downshifts. The cabin of the BMW M2 CS blends an exclusive, authentic aesthetic with the sporty look and feel of Alcantara and lightweight design. CFRP has also been used for the door pulls and door panel trim. Lightweight bucket seats guarantee optimum lateral support, and the backrests are upholstered in Merino leather and Alcantara, with contrast red stitching gracing the armrests. The centre console, side panel trim, and headrests feature M stripes, while the backrests feature CS badging. 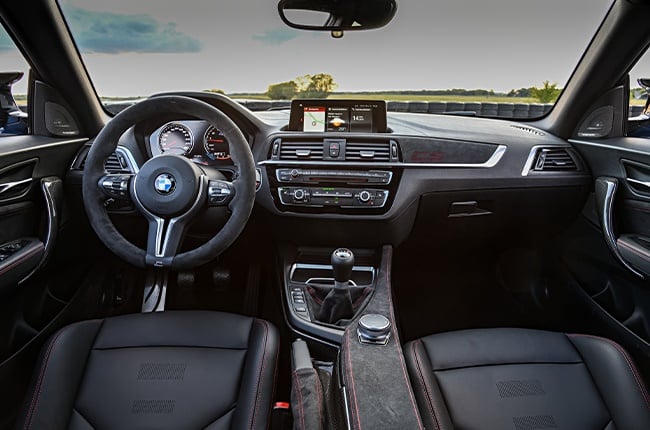 Adaptive M suspension gives the choice of Comfort, Sport and Sport+ modes, each of which alters the damping settings. M Sport brakes comprise of 400mm discs up front, and 380mm discs at the rear are clamped by six and four-piston callipers respectively. M Carbon ceramic brakes are available as an option.

The Dynamic Stability Control is aided in its task by the Active M differential, an electronically controlled multi-plate locking mechanism. The differentials permanent and continuously variable control results in sharper agility, elimination of understeer at corner entry and superior directional stability during braking and load changes.

M Dynamic Mode (MDM) is a DSC sub-function that can be selected as required to allow for a greater degree of wheel slip, which is perfect for situations like high-speed track driving.

The BMW M2 CS rides on 19-inch Y-spoke forged wheels that weigh less than 10kg each and are shod with Michelin Pilot Sport Cup 2 tyres that have been specially matched to the M2 CS.

The BMW M2 CS is pretty handy around a racetrack as a couple of laps around the iconic Kyalami Grand Prix circuit proved. The array of equipment results in a car that thrives on being driven at the limit and rewards the driver with playful predictable handling while steering offers just the right amount of feel. Power delivery is linear and predictable, and braking performance is excellent. The most exclusive BMW M car ever?

Pricing for the BMW M2 CS starts at R1 650 000 and variations include three paint colours, wheel colours, the choice of gearbox and regular steel brakes or optional carbon-ceramic stoppers that offer a weight saving of 23kg, but it comes with a price tag of R160 000.

South Africa's allocation includes all of these variations and 12 of the 30 cars coming to our shores are fitted with manual gearboxes. Each vehicle is individually numbered with a unique plaque on the centre armrest and engine strut brace.

With only 30 of these cars coming to South Africa, BMW knew they were going to have a tough time deciding on how to allocate these vehicles to loyal M customers. With 390 serious buyers ready to put money down, they had to come up with an innovative solution. The answer: 20 of the 30 cars were auctioned off to the highest bidder at an exclusive event. All the profits over and above the list price would be donated to BMW aligned charities. Unconfirmed reports suggest that vehicles sold for an average of R1 900 000, with the most expensive unit reaching R2 135 000.

Although 2200 of these cars will be produced globally, BMW South Africa's decision to only bring in 30 and then to sell them in such a way means that this model will instantly become as sought after and iconic as the M1, 1M and E46 M3. 2021 BMW M2 CS
Supplied BMW South Africa
We live in a world where facts and fiction get blurred
In times of uncertainty you need journalism you can trust. For 14 free days, you can have access to a world of in-depth analyses, investigative journalism, top opinions and a range of features. Journalism strengthens democracy. Invest in the future today. Thereafter you will be billed R75 per month. You can cancel anytime and if you cancel within 14 days you won't be billed.
Subscribe to News24
Related Links
REVIEW | The BMW X3 M Competition is impressive, but you can't have your yin without the yang
WATCH | BMW X3 M Competition goes head to head with Alfa Romeo Stelvio Quadrifoglio
New BMW X5M and X6M touch down in SA - this is how much they cost
Next on Life
SEE | Here are the 21 finalists for SA's 2023 Car of the Year competition