• Both derivatives make use of 1.2-litre engines mated to either a five-speed manual or six-speed automatic transmissions.

Much has been said of Citroen's reintroduction into the local market since they said goodbye in 2016. Some reckoned its comeback was a proverbial shot in the foot, while others saw it as short-lived optimism after a relatively short hiatus.

To officially rubberstamp their new 'homecoming' in South Africa in 2019, they launched the C3 and C5 Aircross SUVs - now they've added a facelifted C3 hatchback to the model line-up.

Citroen - like Fiat, Opel, Alfa Romeo, and Peugeot - now forms part of Stellantis South Africa (the product of a merge between FCA and PSA), with the latter starting the year off on a high launching a slew of new hatch and SUV offerings.

Whether it be a previous bad experience or after-sales service not up to scratch, people have generally moved away from vehicles built and based in France but, with most things, cannot be judged on the past. The direction in which brands under the Stellantis banner is moving makes for really happy reading.

The first generation C3 was introduced in 2002, and became a popular choice in European markets, especially in France. As of 4 May 2021, one million third-generation C3 models have been produced. 2021 Citroen C3 facelift
Wheels24 Robin Classen
Do you think the likes of Citroen and Peugeot will break into and establish themselves in a particular segment? Email us, or share your thoughts in the comments section below.

The model driven at launch was the top-specced Shine derivative retailing for R324 900; it uses a 1.2-litre engine good for 81kW, mated to a six-speed automatic transmission. Alternatively, the more affordable Feel version is priced at R269 900 - with 60kW with the same engine size.

Aesthetically, LED lights and 3D signature rear lights come standard across the range, in addition to six airbags. The unique Airbump (also seen on the C4 Cactus) is found across the front and rear doors, which is a great way to avoid those unsightly body dings. Further aiding its cause in the looks department is the availability of various body and two-tone colour options.

French-built vehicles generally stock the boat when it comes to design and aesthetics, and the intrigue was there to decipher whether it could back up the good looks with spirited runs around city streets and long stretches of road.

Much has been said of the brand's advanced comfort seats and bubble-like cabin, serving as a cocoon that virtually negates exterior noise. Citroen hit the nail on the head in that aspect because it's not just a 'feel good' marketing feature - if there is any hint of road noise from those beefy 16-inch alloy wheels, you wouldn't know otherwise.

When put through its paces, the tiny engine emits a growl more akin to a performance variant. The throttle is as responsive as it should be, and you hardly feel the effects of downshifting under braking, overtaking or tackling inclines. A vehicle can be the most attractive on the planet, but it would likely not see another generation build if it can't even do the basics well.

Looking at it from the outside, you wouldn't know it boasts a massive 300-litre boot capacity, which is a real benefit and bigger than what many of its rivals have to offer. 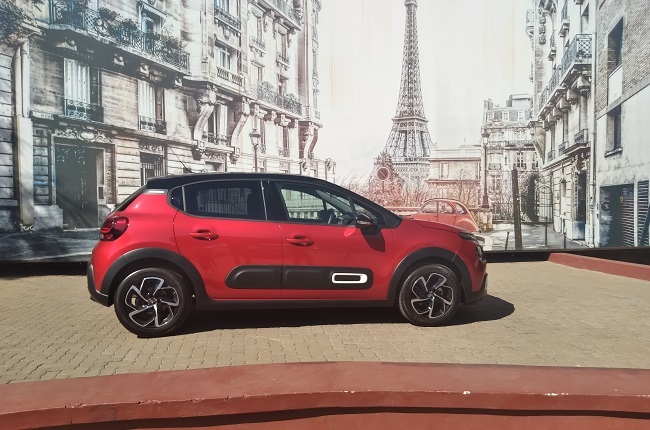 Keeping the driver and occupants safe, in addition to the six airbags, is the presence of nine driver assistance systems like Driver Attention Warning, Speed Limit Recognition, and Coffee Break Alert.

All these systems and functionality incorporate themselves seamlessly that only enhances the driving experience behind the wheel. The distinct round rectangle shape is a theme found in the dashboard, air vents, and Airbump panels.

The idea of owning a French vehicle these days is not the hit-and-miss scenario it might have been a few years ago. Citroen came to SA at a time when the economy wasn't on the best of wickets which, in itself, is a huge risk. But things could be looking up for the automaker.

The refreshed C3 is put together really well and has the potential to sell more than the projected 100 units per month. Ride quality, design and value for money has seen an significant uptake that gives customers something to think about before committing to that debit order. However, in a very competitive market with more attractive offerings, it will be interesting to see if the brand has what it takes to stand out in the crowd.

Models across the entire range come standard with a five-year or 100 000km warranty, and a three-year or 60 000km service plan.

We live in a world where facts and fiction get blurred
In times of uncertainty you need journalism you can trust. For only R75 per month, you have access to a world of in-depth analyses, investigative journalism, top opinions and a range of features. Journalism strengthens democracy. Invest in the future today.
Subscribe to News24
Next on Wheels24
Out with the H1, in with the new: What to know about Hyundai's new premium SA-bound Staria MPV