• Kia's new Pegas has been launched in South Africa.

• The car competes in the compact sedan segment of the market.

• With a competitive price, Kia hopes to reignite locals' interest in sedans.

"The market for sedans is dead." We've heard that countless times before, especially with the impressive sales SUVs and crossovers are enjoying. In South Africa, automakers are slowly but surely moving away from fielding sedans in their portfolios. Instead, they are opting to compete in the more lucrative segments - as the one alluded to at the start of this report.

Kia South Africa believes there is life in the compact sedan segment yet and has just launched its newest contender to compete in this part of the market. And as is customary, the car must win potential customers over with a package that is strong in value and easy on the pocket. The Korean automaker believes that its new Pegas is just what the market needs and is therefore not holding back with what the new car offers.

Gary Scott, CEO of Kia South Africa, says: "With great connectivity features and comprehensive safety specification, the Pegas ticks all the boxes while offering maximum value. There's lots of life in the compact sedan market and the Pegas is poised to draw young families and first-time buyers to the Kia brand." The Kia Pegas line-up consists of three models in two grades - LX and EX - with the EX manual available to sample. Across the board, the Pegas is well-specified without breaking the bank. Features like ABS, ISOFIX anchors, rear-view camera with rear park distance control (PDC), all-round electric windows, and a seven-inch infotainment system are all standard.

The infotainment system is Android Auto and Apple CarPlay compatible and relays many a feature on one's smartphone, including Google Maps. The EX grade adds additional bits and pieces to the package that make the Pegas a hard-to-ignore vehicle in the highly competitive sub-R300 000 market.

READ: Kia's new Pegas compact sedan is now available in SA, here's what you should know

The Pegas' cabin is rather spacious, with rear occupants treated to oodles of legroom. Head- and shoulder room is good all-round, with the car able to comfortably seat five occupants. The 475L boot is another one of the Pegas' strong points. The information display in front of the driver relays all the relevant information regarding one's trip, while the seven-inch screen atop the dashboard makes playing music and the radio quite easy.

The dials with which to control the temperature are solid to the touch, and the faux-leather seat trim offers ample comfort. 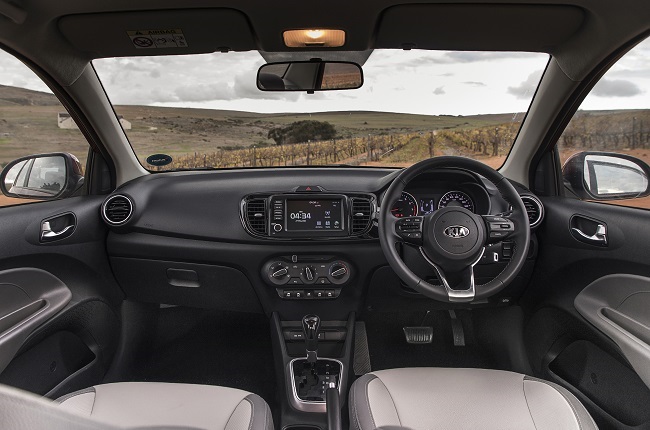 One engine powers the entire Pegas range, that being Kia's popular 1.4-litre four-cylinder petrol engine. In the Pegas, the engine is tuned to deliver 69kW and 132Nm, with a choice of either a five-speed manual or four-speed automatic sending power to the front wheels. Gear changes in the manual model are solid, and the clutch feels ideally weighted under one's left foot.

On the launch drive, which covered city and open-road driving, the Pegas performed admirably. Thanks to the 2 570mm wheelbase, the car feels nicely balanced, and the sheer size is masked well.

The Pegas was not made for performance, but rather to transport occupants in spacious comfort. Kia South Africa let it slip that they began the Pegas project back in 2018. The local team flew to Korea and almost immediately realised that this could be a car that South Africans need. And according to information relayed in the business session, the first consignment has been signed off to dealers across South Africa.

With the Kia Rio sedan no longer on sale in South Africa, the Pegas is the car to fill the gap left by the Rio. And if initial signs are to be believed, the new sedan could be another hit for Kia. The Pegas offers exceptional value at the price and should attract eyes to the compact sedan segment - again.

It is little wonder that Kia South Africa believes that the "Pegas delivers a winning blend of value, roominess, safety and technology to entice both those customers who are in a position to buy their first new car, as well as families looking for maximum value without compromising on quality or comfort." We live in a world where facts and fiction get blurred
In times of uncertainty you need journalism you can trust. For only R75 per month, you have access to a world of in-depth analyses, investigative journalism, top opinions and a range of features. Journalism strengthens democracy. Invest in the future today.
Subscribe to News24
Next on Wheels24
Mitsubishi has updated its new Eclipse Cross SUV to rival the most popular models in SA