• Hyundai has recently launched its upgraded version of its fourth-gen Sante Fe SUV
• There's a new 2.2-litre turbo engine in the range, along with a new eight-speed auto transmission.
• The seven-seater Sante Fe rivals several models with competitive pricing.
• For more motoring stories, go to Wheels24.

Have you taken a look at Hyundai cars of late? Really stopped and taken a closer look?

Over the last decade, if not a bit longer, Hyundai and Kia have changed their design and improved their quality. It's only been going good for the two sister brands. While Hyundai's sales numbers have been hitting it out of the park, the automaker has not been resting on its laurels. We saw it with the new Venue a couple of years ago, and that was already a sign where Hyundai was taking their design and product strategy.

Then came along the Creta, and I won't lie, those new futuristic-type headlights threw me for a bit, but I eventually got used to it. Then Hyundai launched its Sante Fe SUV recently, and the new look continued. We've also seen it on the new Palisade, which will be arriving locally later this year.But it's not just the looks on the exterior; Hyundai has carried the improvements inside the vehicle too and its technology. The latest Santa Fe is the fourth generation and is the flagship in Hyundai's range in South Africa.

The latest version is more than just a facelift and has been completely revamped. Even Hyundai says the interior creates an aura of luxury and prestige. The 2.2-litre turbodiesel engine has been re-tuned, and it is now mated to an eight-speed Dual Clutch Transmission.

First launched in 2000, the Sante Fe has come a long way now in its 20th year, and as the flagship model, there is a lot to like in this large SUV.

Stanley Anderson, sales and operations director of Hyundai Automotive South Africa, says: "The Santa Fe was Hyundai's first SUV, and it still is the flagship model in our local model line-up.

"The continuing improvements the Santa Fe has undergone over the past two decades demonstrate Hyundai's commitment to developing quality products with the latest features for its customers, as is evident from this latest upgrade.

"We believe the Santa Fe offers great value and easily passes the test in its market segment, where the bar is set very high in terms of quality, luxury, an outstanding driving experience and innovative features."

Of course, people of the brand would speak highly of their own products, but there is very little to contest what Anderson says after driving it.

The build quality is really good, and there are no cheap plastics in the cabin as you run your fingers over the fascia and materials in the car. Locally, the new Santa Fe is available in two seven-seater models: the R2.2 Executive with the upgraded turbodiesel engine and new eight-speed Dual Clutch Transmission (DCT); and the R2.2 Elite, with the same engine and transmission, but with All-Wheel Drive and several more luxury features.This latest Santa Fe is the first model to be fitted with the next-generation powertrain Smartstream R2.2 turbodiesel engine, which produces 148kW (3kW more than the previous model) and 441Nm (5Nm more).

The new engine block is made of aluminium instead of iron, making it 19.5 kg lighter. There's also a new 2 200 bar injection system improving overall engine performance.

Another first for the brand is the newly developed Smartstream Wet 8DCT, a dual-clutch transmission delivering quick eight-speed shifting and acceleration performance. It employs two clutches, one coupled to a shaft for odd-number and the other to the shaft for even-number gears. There's also no gear lever inside the car, but you change gears via buttons on the new floating centre console. At first, I thought this would hamper the driving experience, but it really is as simple as a flick of a button. And, once you get used to it, it takes the same effort as it would using a conventional lever.

The SUV offers a great drive, despite its bulky size, but everything is well proportioned. The eight-speed DCT offers smooth shifting while enhancing fuel efficiency at the same time. The fuel needle hardly budged during the day's drive through the Swartland district.

The automaker also says the maximum torque capacity is increased by 58% thanks to an optimum clutch cooling performance, achieved through a dedicated electric oil pump for lubrication. The high-efficiency hydraulic control system consists of an on-demand control-based electric oil pump and accumulator. In the Elite model, Hyundai's signature HTRAC four-wheel drive technology is featured. HTRAC is a combination of the words "Hyundai" and "traction," and the technology, says the automaker, is intended to enable agile handling and better torque application depending on wheel grip and vehicle speed.

For the first time, the Santa Fe Elite now comes with a Terrain Mode selector: a control knob located in the centre console to switch between different drive modes for sand, snow and mud, as well as the driving modes Comfort, Sport and Eco. An additional Smart driving mode option means the car will automatically recognise the driving style and select a mode, so the driver does not have to.

The drive modes Comfort, Sport, Eco and Smart are also standard features in the Executive model. The Sante Fe is not only a comfortable seven-seater but also comes with all the bells and whistles you can think of. Premium feel and quality materials adorn the car. Probably my most notable highlight are the heatable and ventilated seats which work fast and efficiently, as well as the little compartment for your cellphone for wireless charging - and wireless Android Auto or Apple CarPlay connectivity.

My driving partner had complained about the infotainment interface graphics looking a bit outdated, but you have to connect your mobile phone to see the screen come to life and use all the available features if you're looking for colour and more graphics. Pricing for the Sante Fe Executive model is from R769 500 and R869 500 for the Elite. Rivals for the Sante Fe include Jaguar's E-Pace, Ford Everest, Toyota Fortuner, Audi Q5, BMW X3 and X4, and also the Land Rover Discovery Sport.

A few models are coming in cheaper than the Sante Fe, but those do not feature some of the comfort treats and niceties as the Hyundai and make up in value for money.

If you've never considered a Hyundai before, taking a closer look at the Sante Fe's spec sheet and features might make you think twice. 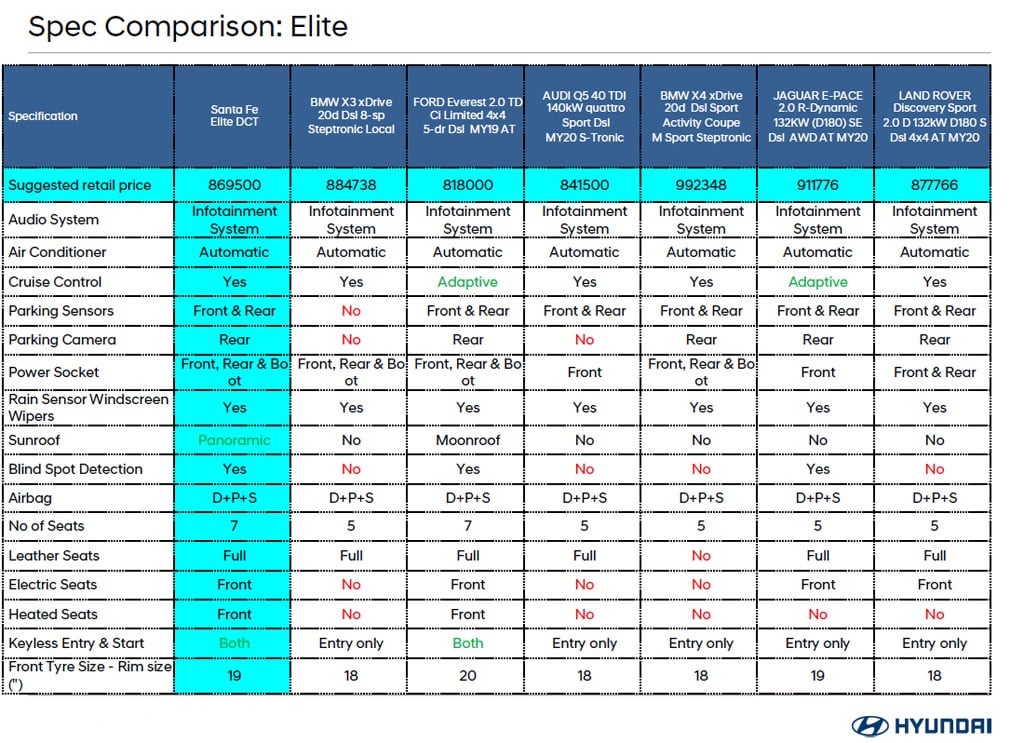 Hyundai Sante Fe
Supplied Hyundai
We live in a world where facts and fiction get blurred
In times of uncertainty you need journalism you can trust. For only R75 per month, you have access to a world of in-depth analyses, investigative journalism, top opinions and a range of features. Journalism strengthens democracy. Invest in the future today.
Subscribe to News24
Next on Wheels24
Why engine output never matters - in a Ranger Raptor SE bakkie, and everything else you should know