This isn't a car review. Because the Ford Mustang California Special isn't a car, it's an icon, writes Wheels24 contributor Calvin Fisher.

Despite its inception in the 1960s, the first right-hand drive Ford Mustang only arrived in South Africa in 2015, just seven years ago. Since then, 3 652 have been sold in Mzansi alone, making it one of the best-selling sports cars in the land.

Using Ford's own metric, it accounts for 87% of the country's sports coupe sales. Mind you, bonafide performance cars are excluded from that tally, so think the likes of the BMW M440i and Audi S5, as opposed to M and RS cars and similar AMGs. Still, this number does include the BMW Z4, its sister-from-another-mister, the Toyota Supra, and its sibling, the GR86. So, an impressive statistic nonetheless. 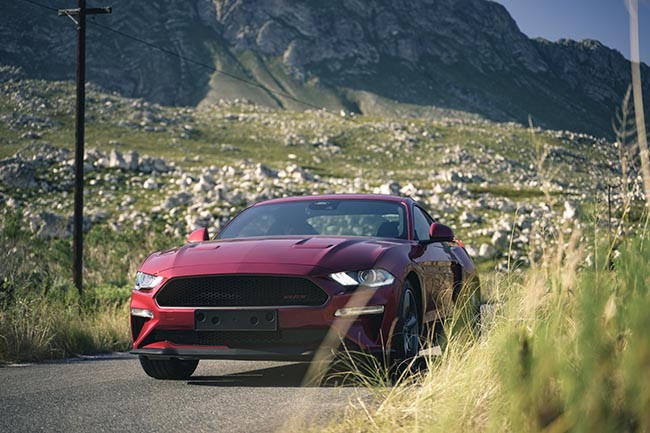 Driven by the market's love of special editions and Ford's realization that they're naturally quite lucrative endeavours, the marque has identified another potential collectible in the California Special.

Hey, game recognizes game, and the California will have no trouble selling out. To that end, only 100 will be making it to our shores, bringing the ultimate number of specials to 55 Bullitts, 100 Mach 1s, and another 100 California Specials. None of these have gathered dust. The GT/CS story is a simple one, born in 1968 when local California-based Ford dealerships began selling a bespoke version of America's favourite car. This at a time when Ford's own production supply couldn't meet the demand in the most Mustang-obsessed car culture in the world. The mothership later honoured this ingenuity by making the GT-based California Special hence GT/CS, a staple offering and fortifying its legacy for all time. And now I'm driving one, almost six decades later, at the tip of Africa.

Like the original car, this gets the blacked-out honeycomb grille, complemented with GT/CS badge. You'll also find this moniker on the dashboard, on the door sills, and on its bum. It also forms part of the decal kit on the flanks, located under those particularly tasty side scoops.

Only 100 of these ponies will be available for the South African market... Ford's special edition Mustang California.
?? @CalvinFisher_ZA pic.twitter.com/A5GOm1MuLu

Under its nose resides the GT Performance spoiler, while tucked into each archway are carbonized grey 19-inch wheels. At the rear, you'll encounter an active-valve performance exhaust tipped with 5.5-inch quad pipes. The GT performance package also includes an active rear wing. It looks and sounds like the business.

The cabin carries over this theme with the above-mentioned California Special badge, carbon hex aluminum panels surrounding the HVAC, and embossed GT/SC logos on the seats. Then there are similar Miko suede inserts in the doors, adorned with red stitching made from recycled polyester. Oh, and finally, GT/CS floor mats.

With branding truly taken care of, there are other things to report in the living room, such as Ford's Sync3 infotainment centre hooked up to a premium sound system with ten speakers. Then there's the trip computer featuring all sorts of fun track apps, such as line lock, which I was more than happy to test. And test. And test. Yep, it works well; I give it an 11 out of ten. On the tar.

Power comes, of course, from one of the very few naturally aspirated V8 engines still on the market, the 5.0-litre lump capable of 330kW and 529Nm. As we've seen before, it's been paired with the same 10-speed automatic transmission as the Ranger. It's a fine pairing, quick but not rapid, which is the overall brief of the Mustang, in my opinion. If I may jump ahead to the price, at R1 154 900, the GT/CS is hardly cheap, but it's pretty affordable for an icon. Its 4.5sec 0-100km/h sprint time reflects this. Quick, but some hatchbacks can do this too, albeit of the hyper variety. But none of those, nor the Mustang's rivals, can offer this kind of character.

Back to performance, and there's worth mentioning that it has a limited-slip differential, features a range of driving modes (normal, sport, track, drag, and snow/wet), plus features Ford's Magneride suspension damping system. Stopping power comes from massive ventilated discs, and Brembo 6-pot calipers slow it. There's ESP (electronic stability programme), adaptive cruise control, pre-collision assist with pedestrian detection, automatic emergency braking, and lane-keeping alert. So not entirely as analogue as its origin story would have you believe, and that's a good thing. We love the old-school charm of the Mustang. Also, they've added a hue called Oil Slick Purple to their colour palette, bringing the number of shades to eight, including From Atlas Blue, Cyber Orange, Rapid Red, and Shadow Black. You'll be noticed no matter which paints you opt for because that's ultimately the point of the Mustang. It demands attention. Loudly. Icons do that.

We live in a world where facts and fiction get blurred
In times of uncertainty you need journalism you can trust. For 14 free days, you can have access to a world of in-depth analyses, investigative journalism, top opinions and a range of features. Journalism strengthens democracy. Invest in the future today. Thereafter you will be billed R75 per month. You can cancel anytime and if you cancel within 14 days you won't be billed.
Subscribe to News24
Next on Wheels24
REVIEW | It's no surprise Toyota's Fortuner is a top seller in SA