Often we, as both consumers and motoring media, forget how the auto industry functions. The nitty-gritty workings of the industry can leave you astounded if you’re not all clued up, while at the same time having you learn something new.

The case in point is the new Toyota Corolla Quest. You’d be quick to point out that this is a rebadged 11th-generation Corolla. And you’re not wrong. Except, there is much more to it than that.

In a nutshell: Toyota South Africa has been building the outgoing Corolla sedan in South Africa for the last number of years. By the end of the car’s lifecycle (in late 2019), Toyota managed to even the expenses made to have the production line fitted. For the entirety of any model’s production run, a financial portion of a unit’s sale goes towards covering the cost for the production line.

In the Corolla’s case, those expenses have been covered. But why just close shop? Why not reuse that production line to produce a new car (Corolla Quest), and sell it at a considerable discount to consumers? And that’s why we’re here: at the launch of the new Toyota Corolla Quest. 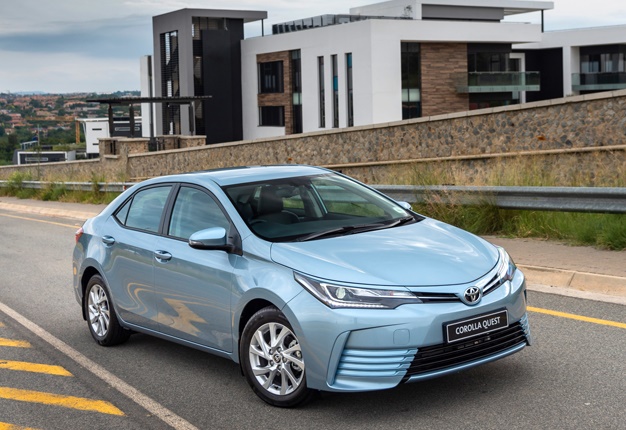 Getting the price right

It’s common knowledge in the automotive world that sedans and hatchbacks are dying a slow death. The increased popularity of SUVs and crossovers have become so intense, forcing automakers to cater to the needs of this buyer.

And while Toyota is also playing the SUV game with a number of its model ranges, it persists with the sedan. Especially its Corolla - of which a new, 12th-generation will arrive in March 2020. Forming part of its Corolla range is this new Quest; a more affordable alternative to the new Corolla range, but without sacrificing any of the niceties. Together with the above-mentioned production line facts, the new Corolla Quest suddenly has a financial gain to it.

In base-specification Quest trim, the car is a mere R14 900 more expensive than the outgoing Quest model (R249 900 vs. R235 000). In motoring terms, this is very good - especially when you factor in that the new model has several features over the older model.

Toyota SA also added two new models to the Quest range to give buyers a fair bit of option. The new models are specified as Prestige and Exclusive. Because these models are, effectively, affordable alternatives to the eleventh-generation Corolla’s top-spec models, they carry the most significant cost-benefit. The Prestige is R44 600 more affordable (R186 500 vs. R331 100), whereas the Quest Exclusive undercuts the older top-spec Corolla by a massive R63 700 (R307 400 vs. R371 100).

All three Corolla Quest models are fitted with a reasonably extensive features list that, on average, carries many of the older Corolla sedan’s features over. The base Quest, however, is not that much more kitted out than the old Quest, but it is equipped with auto door locking function, electric windows, four speakers, and airbags.

The Prestige model has, in addition to what is offered on the Quest, six speakers, a multimedia system that reads DVDs, a leather steering wheel, cruise control, seats that are covered in both cloth and leather, and 16-inch alloy wheels. The Exclusive model does the top-of-the-range tag justice. In doing so, keyless-entry and –start, rain-sensing wipers, auto headlamp leveling, LED headlamps, and leather seats form part of the package over that of the Prestige.

It might sound like everything should have made the new Quest a lot more expensive, but by using existing technologies and not redesigning the wheel, Toyota made a sound decision that speaks to a broader audience. Toyota will also paint the Quest on the same paint-line used for its Hilux bakkie. Another attempt at decreasing the price and one that has worked.

Five exterior colours are available, but Chromium Silver, Arizona Red, and Graphite Grey Metallic are newly introduced. Glacier White and Seaside Pearl Metallic have been carried over from the previous model.

The older Corolla Quest used a 1.6-litre petrol engine, but the new model makes do with a 1.8-litre unit. Still naturally-aspirated, Toyota SA says that this new engine has 13kW more than the old 1.6-litre, and is more fuel-efficient.

Producing 103kW, the new engine does feel more comfortable to drive. It sounds less under strain and gains momentum in a much smoother manner. The six-speed manual gearbox seems to be a better fit and cogs over with precision and surety. The automatic option, a Continuously Variable Transmission (CVT), is not as engaging as its manual counterpart. Even when engaging Sport mode, the engine is too eager to chase the redline, emitting a sound akin to that of a volume control knob.

Personally, the manual option is the preferred option. But given that the automotive world is steadily switching over to automatic, albeit a CVT, Toyota is in a prime position to have its new Quest fitting that trend.

The automaker claims a fuel return of 7.0-litres/100km. The new Toyota Corolla Quest might come across as a rebadged Corolla, but the package, as a whole, has proven that it is not. The automaker went to great lengths to give the car its personality and has adjusted the package in such a way that one can’t help but agree.

Objectively speaking, the new Corolla Quest will speak to a precise audience, and Toyota will continue to hope that they can reach their annual target of selling 14 000 Quest units in South Africa.

We live in a world where facts and fiction get blurred
In times of uncertainty you need journalism you can trust. For only R75 per month, you have access to a world of in-depth analyses, investigative journalism, top opinions and a range of features. Journalism strengthens democracy. Invest in the future today.
Subscribe to News24
Related Links
How the Toyota Quest defies the sedan trend in SA
'There is still a need for an affordable sedan' - The new Toyota Corolla Quest gets more power
Next on Wheels24
Coming in January: We have pricing for the new 2022 Volkswagen Polo, Polo GTI