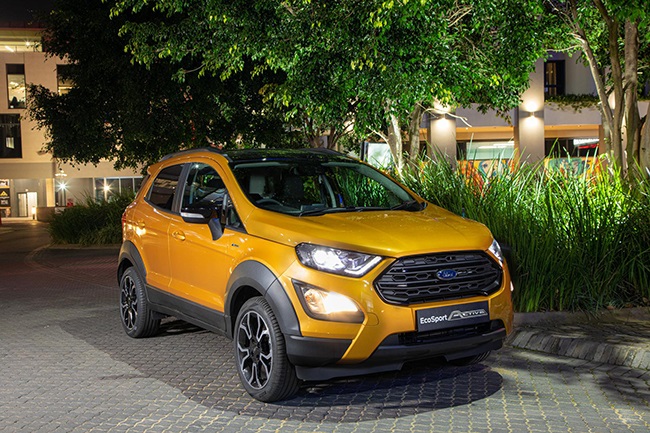 • Ford South Africa has launched another special edition EcoSport model.
• While the Ambiente production will halt in India later this year, the EcoSport will still sell in SA.
• Ford reveals local Puma plans, and why our EcoSport looks different to Euro-spec.

With news that India would no longer be building the EcoSport, it meant Ford's local line-up would look rather bleak, with only the Ranger and Everest as headline cars. The American automaker announced earlier in 2021 that it would stop building cars at its plant in India, directly impacting the local availability of one of the brand's best-selling cars over here. But, this isn't the case, and with a new model now added to SA's EcoSport range, the popular compact SUV doesn't seem to be on its way out anytime soon.

In fact, the tap (read: factory plant) is still running in India, and it hasn't shut down yet. And, even when it does, says Ford SA, the EcoSport will still come off the line for quite some time until production comes to a complete halt forever over there. It's also important to note that while the India plant will finally shut down at an unconfirmed time later this year, it is only the entry-level Ambiente model that has a knock-on effect at home. Ford SA reckons they've ordered thousands of cars that will still see enough stock run into 2023. It also means that Ford will still receive the rest of the EcoSport models from other markets (namely Europe), so there shouldn't be any assumption that the vehicle will no longer be sold in South Africa at all.

The EcoSport is almost a decade old since it was launched in 2013. Since then, Ford has sold a total of 75 000 of these compact SUVs up until April 2022. It also means during this period; it has claimed a 21.3% share of the mini-SUV segment.

If there's one thing about South Africans, we sure love a "special edition" model. It's the reason why Ford created the EcoSport Black in 2021. The limited-edition model was only supposed to be a six-month special, but because customer demand for this model was so high, the automaker decided to let it run for the rest of 2022. The EcoSport Black is based on the 1.5-litre Ambiente model, and Ford has already sold 1 204 units in the past year.

And it's for this reason another special edition model has been added to the range in the form of the new Active model because customers want something a little different from the norm.

The Active is based on the Trend 1.0-litre EcoBoost auto model and, like the Black edition, also offers unique styling and feature enhancements. Under the bonnet, the same 1.0-litre engine is good for 92kW and 170Nm mated to a six-speed automatic gearbox.

Why does our EcoSport not look as good as the European model?

Many local Ford fans also want to know why our EcoSport still has the full spare at the back of the car, as it hinders the looks compared to the European version. Customers feel the model without the spare looks much better than ours. However, Ford says South African EcoSport customers drive on much more gravel roads than others anywhere else in the world.

"The European model has no full spare and only a run-flat," says Ford SA, "And this just won't work for local buyers."

So, we're stuck with that spare on the rear, but it's for the right reasons. Will the Puma ever reach SA?

It's not that Ford doesn't want more products available in their local line-up. The automaker is genuinely trying to expand product availability in South Africa. They're trying hard to bring in the Puma and even the Mustang Mach-E. Still, because availability is such a global problem right now, SA gets the short end of the stick, and our market just doesn't stand a chance against other significant markets worldwide.

All we can do is pray to the Ford gods and hold thumbs that something will give for the Blue Oval brand's mothership to bring in more new cars to our local range.

EcoSport is a critical product for Ford SA; it's their best-selling passenger car in a tiny portfolio, especially as most automakers are battling product supply due to the global chipset shortages. In May, Ford sold 674 EcoSport models in SA, and they've seen similar numbers every month before that. This compact SUV does incredibly well for them and carries the brand in the passenger market so there's no reason they'll discontinue a vehicle that's moving such great numbers in the current economy.

An unbundled Ford Protect Service Plan is available to customers via Ford Finance and Insurance for a four-year or 60 000km service plan at an additional R7 532.50.

It's important to note that Ford Protect product offers are only available at the first point of vehicle sale or less than 30 days from the warranty start date and less than 500km. Ford Protect also offers several alternative time and distance options on Service and Maintenance Plan products available only at the point of sale.

We live in a world where facts and fiction get blurred
In times of uncertainty you need journalism you can trust. For 14 free days, you can have access to a world of in-depth analyses, investigative journalism, top opinions and a range of features. Journalism strengthens democracy. Invest in the future today. Thereafter you will be billed R75 per month. You can cancel anytime and if you cancel within 14 days you won't be billed.
Subscribe to News24
Next on Wheels24
Lighting the fire: Brandt BRV shows its new SA-built flagship bakkie