• Wheels24 had an exclusive first drive in the new Italian sports car.

• The Ghibli Hybrid is powered by a turbocharged 2.0-litre engine.

"If you expect the Ghibli to jump up and scream 'I'm a hybrid!' you'll be sorely disappointed."
Dries van der Walt, Wheels24 contributor

Maserati has a very clear idea of what motoring's future holds: power, lots of it, achieved without incurring the penalty of added engine capacity and increased fuel consumption. We were given a taste of The World According to the Trident, in the form of test driving the Ghibli Hybrid, Maserati's first-ever electrified vehicle, which has just arrived in South Africa.

"You can view the Ghibli as a sports hybrid," says Nagesh Naidoo, Maserati Johannesburg's dealer principal. He explains that the electric system in the Ghibli Hybrid is not used exclusively but always in conjunction with its 2.0-litre turbocharged engine. The benefit of this is that the Ghibli Hybrid combines both power plants' benefits. For example, the electric motor supplies additional torque at low revs, where the turbocharger's speed is not yet sufficient to develop significant boost. Part of the party trick here is that, in addition to its turbocharger, the Ghibli also sports an electric supercharger - Maserati calls it 'e-Booster' -  which works in tandem with the conventional turbo and is driven by either the battery or the car's 'Belt Starter Generator', which recovers energy during braking or deceleration and charges the battery in the boot. Incidentally, the battery's location also balances the front-mounted engine's weight to give the Hybrid a favourable weight distribution.

"The hybrid system's operating strategy ensures that the eBooster is always available, via battery or BSG, whenever it is needed," says Naidoo.

If you think the Ghibli will whisk you away as soundlessly as a wraith, think again. Maserati recognises the importance of exhaust sound as part of a performance car's emotional impact and has spent a fair bit of time and effort to imbue the Ghibli Hybrid with Maserati's trademark snarl, despite the engine being an inline-four rather than a V6 or V8. The white coats at the Trident headquarters are rather proud that they've achieved this naturally, without having to resort to amplifiers as other hybrid manufacturers have done.

Externally, the Hybrid version of the Ghibli features several subtle details in dark blue, the colour universally adopted as the symbol of clean mobility. These include the three traditional air ducts on the front mudguard, the Brembo brake callipers and a lightning bolt in the C-pillar logo. It also gets new boomerang-shaped tail light clusters inspired by some Maserati models from the past.

Inside the Hybrid has been brought up to date with a bewildering array of features, including a climate-controlled mobile phone compartment with wireless charging, and the latest generation 'Maserati Intelligent Assistant' multimedia system. The system runs on Android Automotive, and its centrepiece is a new frameless 10" 1 HD touchscreen with a ratio of 16:10. Proof is in the pudding

But the proof of the pudding is in the eating - or, in this case, the driving. The moment we left the Bryanston dealership, the Ghibli Hybrid began to dispel any misconceptions we may have had. The most immediate impression was the fact that there is virtually no turbo lag - the car pulls strongly from a standstill, and when the turbo does kick in, it is all but unnoticeable. Joburg's traffic offered scant opportunities to get the turbo spun up, and in another turbo car, it would have made for a painful driving experience. Still, the Ghibli's e-Booster proved its value at every traffic light.

The pronounced Italianate seating position notwithstanding, the sense of comfort and luxury was also immediately apparent. Fortunately, Leo Kok, Maserati's PRO, was at hand to play co-pilot, operating and demonstrating the various driving aids such as Lane Keeping Assist and Adaptive Cruise control. These features combine input from more cameras than your average movie set, and even features radar in its list of sensors. It was easy to postulate that, once on the highway, you could simply leave the car to drive itself until you reach your offramp.

Out on Gauteng's extensive highway network, we had a little more scope to stretch the Ghibli's legs, and the Trident snarl became noticeable whenever we accelerated hard - something we did for the sheer pleasure of it every time the opportunity presented itself. With 246kW and 450Nm (peaking at a remarkably low 1800rpm), the Hybrid produces only marginally less power than the 3.0-litre V6 'conventional' Ghibli. 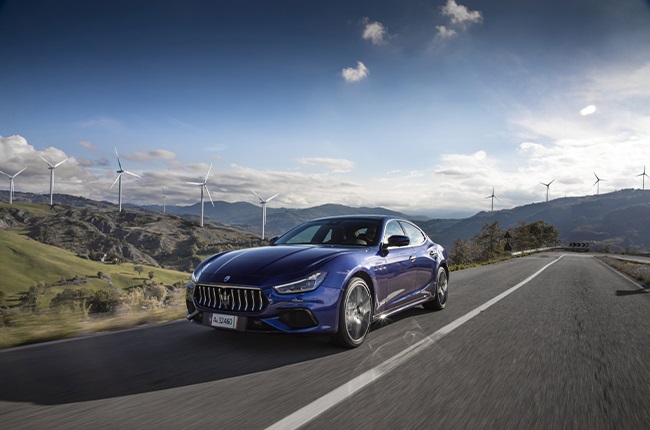 While the hybrid nature of the Ghibli is so seamless as to almost go unnoticed, it definitely does what it says on the box - it boosts the car's performance beyond what any reasonable person would expect from a 2.0-litre inline-four, turbocharged or otherwise.

Although the everyday traffic also precluded any significant exploration of its handling, it was evident that the Hybrid is decidedly sure-footed, to a large extent thanks to its even weight distribution. While essentially a luxury sedan, the electrified Ghibli will undoubtedly be extremely rewarding to drive in anger.

One of the many surprises of the Ghibli Hybrid is that, with prices starting at R1 642 000, it compares well with its competition. The base price, incidentally, positions it as Maserati's entry-level, which is somewhat ironic since it is the most technologically advanced vehicle in Maserati's current local range.

If you expect the Ghibli to jump up and scream: "I'm a hybrid!" you'll be sorely disappointed. But if you are looking for a car that seamlessly combines the best of the internal combustion present with the electric future, your search may be over. To put it in contemporary terms: if hybrid propulsion is a technology in search of a killer app, it may have found it in Maserati's first entry into the field. 2021 Maserati Ghibli Hybrid
Maserati Media
We live in a world where facts and fiction get blurred
In times of uncertainty you need journalism you can trust. For 14 free days, you can have access to a world of in-depth analyses, investigative journalism, top opinions and a range of features. Journalism strengthens democracy. Invest in the future today. Thereafter you will be billed R75 per month. You can cancel anytime and if you cancel within 14 days you won't be billed.
Subscribe to News24
Related Links
Maserati's new era - Ghibli Hybrid the first step into the future for the famed Italian automaker
Here's what you need to know about Nettuno, Maserati's new 463kW halo engine marked for SA
Maserati expands Trofeo range with two sedans, each sporting a 432kW V8 engine
Next on Wheels24
Toyota’s new Starlet rally car is purpose-built and features a special ingredient from the 1990s