F-Type, Supra, Z4... Here are three rivals Nissan's upcoming '400Z' will have to thwart off in SA

Nissan is reportedly hard at work on a replacement for its 370Z. In April, Wheels24 reported on the successor that is likely to be called the '400Z'; in reference to the engine's power output, i.e., 400bhp.

While the information on this car is still scarce, we do know that the 400Z will be powered by a twin-turbocharged 3.0-litre V6 petrol engine that will produce around 294kW.

All of the power will be fed to the rear wheels via an automatic gearbox that should see the car go from 0-100km/h in under five seconds. We say five seconds because that will put it in its rivals' company.

But, which cars will the forthcoming 400Z coupé go up against? Would it be coupés, convertibles, or both? What does the 400Z have to offer if it wants the upper-hand over its rivals? On that, we can only speculate, but Nissan's latest sports car has it all to work for if it wants to have the last laugh against these reckoned rivals.

Nissan South Africa said to Wheels24 that at this stage, it is not yet confirmed if and when the car will arrive locally. "Given the current macro-economic conditions, we are looking at various factors," the automaker said. The Supra has just been crowned the 2020 Sports/Performance Car of the Year, which only underlines its positive impact on the market. Launched in 2019, the Supra has garnered wide acclaim for its driveability and driver involvement, even though it shares several architectural elements with the Toyota Z4.

Under the bonnet lies a turbocharged 3.0-litre six-cylinder engine that produces 250kW and 500Nm. All of the power is sent to the rear wheels via an eight-speed automatic gearbox. The coupé will run to a limited top speed of 250km/h, but not before smashing the 0-100km/h sprint in 4.3 seconds.

It's not just the engine that's shared with the Z4. The interior is borrowed from BMW, as well, albeit a previous-generation version. Two models make up the GR Supra range. While the Supra only has one engine to choose from, the BMW presents its Z4 with two engine choices: the 3.0-litre that's shared with the Supra, and a 2.0-litre unit. While the 2.0-litre is the least likely to give the Nissan 400Z any sleepless nights, its 145kW/320Nm provokes ample fun through your favourite mountain pass. And, the rear-wheel-drive car can go from 0-100km/h in 6.6sec and onto a top speed 240km/h.

The real rival to the 400Z is the Z4 M40i. Though it shares its engine and gearbox with the Supra, 0-100km/h is marginally quicker at 4.1sec, while top speed is also limited to 250km/h. In typical BMW fashion, the Z4 offers a truly involving drive that requires the driver to have their wits about them. 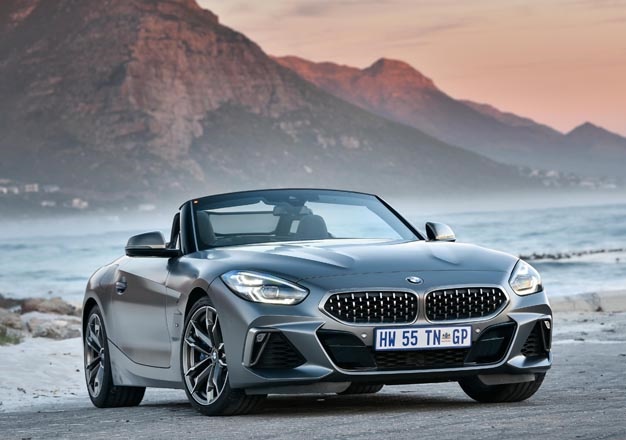 Out with the old and in with the new. That's the situation with the Jaguar F-Type. Almost silently and under the lockdown radar, the new F-Type has been listed on Jaguar South Africa's website. And while the car has not yet been officially launched, the automaker did upload details on its new range.

As before, a range of turbocharged petrol engines will be on offer, and every engine will be mated to an eight-speed automatic gearbox. While the 2.0-litre four-cylinder is too tame to rival the 400Z and the 5.0-litre V8 too overpowered, it only leaves the 3.0-litre V6 as a viable rival to the Nissan.

WATCH: 5 things to know about the facelifted Jaguar F-Type

The F-Type is available in both coupé and convertible body types.

2020 Jaguar F-Type. Image: Jaguar SA
We live in a world where facts and fiction get blurred
In times of uncertainty you need journalism you can trust. For only R75 per month, you have access to a world of in-depth analyses, investigative journalism, top opinions and a range of features. Journalism strengthens democracy. Invest in the future today.
Subscribe to News24
Related Links
Could it be? Nissan reportedly working on 370Z successor, called the 400Z
REVIEW | Why the Toyota Supra can hold its own against the BMW Z4's criticism
Next on Wheels24
Toyota confirms hot GRMN Yaris, but South Africans may not be too pleased