The normally urbane Audi A7 Sportback is about to bare fangs again as the successor to the original RS 7 brings 441kW and 800Nm to bear on the 2019 Frankfurt Motor Show.

More power meets greater practicality and improved efficiency in the new, second-generation model, which for the first time houses five seats and a mild hybrid drivetrain within its significantly broadened body.

Although unmistakably descended from the A7 Sportback - with which it in fact shares only its bonnet, roof, front doors and tailgate - the new RS 7 Sportback looks perpetually ready to wield its sledgehammer performance. Its sinewy body virtually hugs the road surface, and its sizeable wheels are shrouded by boldly flared arches that leave no margin for doubt about the mettle of this latest Audi Sport offering.

The latest addition to the fast-growing Audi Sport stable is set to reach its first customers in early 2020. To accentuate the 1951mm width even further, the front of the new RS 7 Sportback features a broad, flat Singleframe with no contrasting border. The radiator protective grille with its gloss black RS-specific three-dimensional honeycomb structure and the large front air inlets and vertical fins also contribute to the dramatic stance, as do the horizontal blade marking a distinctive downward edge to the front end and the RS matrix LED laser headlights with their dark bezels and dynamic indicators.

Along with the rear LED lights, these ultra-sophisticated units also run through RS-specific ‘animation’ sequences when the vehicle is locked and unlocked.

At the rear, the RS exhaust system broadcasts a suitably rich and full-bodied V8 soundtrack from two characteristically large, oval tailpipes finished in chrome which sit beneath an RS-specific bumper with a rear diffuser and gloss black detailing.

At speeds of 100km/h and above, a spoiler extends from the tailgate. Sporty and futuristic: the interior

Much like the exterior design, the architecture inside the new RS 7 Sportback combines taut surfacing with clearly defined contours, and seamlessly integrates the user interface. The upper MMI touch response display is embedded in the predominantly black architecture in a way that renders it almost impossible to see where the display ends and the surroundings begin, says Audi.

The driver can use the upper RS monitor display to call up an overview of drive system component temperatures, maximum g-forces and information regarding tyre pressures and temperatures. 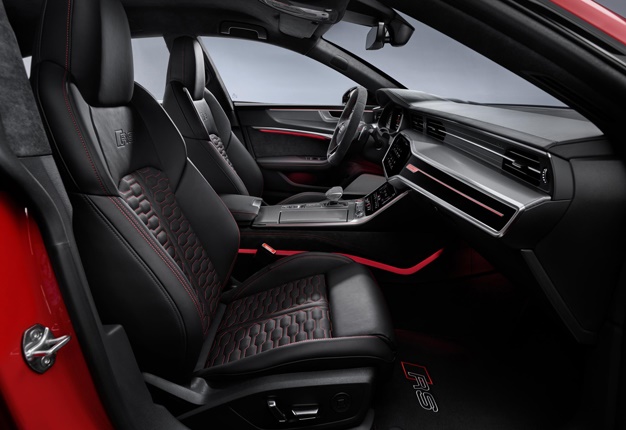 RS sport seats upholstered with perforated Valcona leather featuring a honeycomb pattern and RS embossing are standard, positioning the driver perfectly behind the flat-bottomed, fully perforated RS sport leather steering wheel with new large RS aluminium shift paddles and multifunction buttons, including the RS MODE button, which the driver can use to enable the new Audi drive select RS1 and RS2 modes. This automatically opens the RS-specific displays in the Audi virtual cockpit.

The RS and RS 7 logos adorn the steering wheel, seats, and illuminated front door sill trims. Logo projectors on the front and rear doors beam the Audi Sport emblem onto the ground when the doors are open.

For the first time, Audi Sport is offering the five-door RS 7 Sportback with a three-seater rear bench in the interest of maximum versatility. When its split seat backs are folded down, up to 1390 litres of luggage space are made available, and when five adults are on board 535 litres remain at their disposal. The long tailgate opens and closes electrically as standard, with an optional convenience key allowing it to be operated by foot gesture control. The 4.0-litre TFSI in the new Audi RS 7 Sportback produces 441kW and delivers 800Nm of torque within a broad range from 2100 to 4500 rpm. The high-performance Sportback will sprint from 0 to 100km/h in only 3.6 seconds and reach an electronically-limited top speed of 250km/h.

Accompanying the performance is a suitably characterful and full-bore V8 sound which can be modulated via the standard Audi drive select dynamic handling system. In the customisable RS1 and RS2 modes, customers can decide for themselves whether they want a sporty or balanced tone.

Thanks to its mild hybrid system (MHEV) with a 48-volt main on-board electrical system, the engine combines maximum performance with high efficiency. The belt alternator starter can recover up to 12kW of power and feed it into a lithium-ion battery as electricity. If the driver releases the accelerator at a speed of between 55km/h and 160km/h, the drive management will select one of two options, either recovering energy or coasting with the engine switched off depending on the driving situation and the settings in Audi drive select. When the driver steps on the accelerator, the belt alternator starter will start the engine again. MHEV technology also allows for start-stop activation at speeds of 20km/h and below.

The power produced by the 4.0-litre TFSI is directed by the standard eight-speed tiptronic transmission with optimised shift times and a new launch control function to the quattro permanent all-wheel drive system. Drive forces are distributed to the front and rear axles in a 40:60 ratio via the purely mechanical centre differential. If one wheel slips, more drive torque is automatically transferred to the axle with the better traction. Up to 70% can flow to the front wheels and up to 85% to the rear.

The driver can determine the character of an RS 7 Sportback using the Audi drive select dynamic handling system, which features six profiles: comfort, auto, dynamic, efficiency and the customizable RS-specific RS1 and RS2 modes, which can be enabled directly via an RS MODE button on the steering wheel. Audi drive select influences factors including engine and transmission management, steering assistance, the suspension, dynamic all-wheel steering, the quattro sport differential, the exhaust flaps, and the operating characteristics of the automatic air conditioning system.

In RS2 mode, customers can switch the Electronic Stabilisation Control (ESC) to sport mode at the touch of a button. We live in a world where facts and fiction get blurred
In times of uncertainty you need journalism you can trust. For only R75 per month, you have access to a world of in-depth analyses, investigative journalism, top opinions and a range of features. Journalism strengthens democracy. Invest in the future today.
Subscribe to News24
Related Links
The 2020 Audi RS6 Avant is a mild hybrid with 440kW!
We drive Audi's new funky A1 Sportback luxo-hatch
Next on Wheels24
2022 Lexus LX ultra-luxury SUV breaks cover and it's coming to SA in a few months